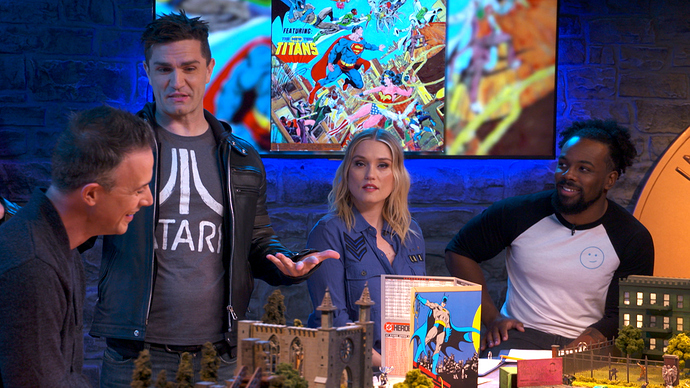 Friday the 13th is upon us and what better way to celebrate it than with friends while figuring out the clues? We know that all the characters are not who they seem, so who are they really?
Join us on Friday to gather more clues and speculate until our hearts content!

Who: You, silly!
What: DC Universe All-Star Games, Season 1, Episode 3
Where : Right here on the forums! In this thread! In the comments below! Maybe on your phone! But also, you’ll be watching DC Universe All-Star Games on a big screen. So there, too.
When:: Friday, March 13th, at 6p PST/9p EST
Why: Because the community that geeks out together, stays together.
How: Great question- read below!

I had to pass on last week’s ASG WAL at the last minute, but I will try very hard to make this week’s festivities.

I’M BACK! Very happy to say that I’ll be joining in on the fun tonight!

Excuse me, did somebody say THE QUESTION?

Guys, how do you not know to page me immediately when my boy Q comes up? I gotta get in on this.

According to the breakfast league, pagers aren’t used as much yet in the 80s… they mostly use answering machines in the 80s

Really enjoying the series, a watch along is the only thing to make it that much more fun, cannot wait!

They really have done an amazing job - I find myself (alone) audibly guessing and playing along, which is why I am so excited to see the WAL

Hello @Pretty.Poison.Bombshell, I’m guessing all the episodes were film in one day on the set of DC Daily, when did they film playing the game?

Hey @Reaganfan78! I do believe they were all filmed in the same day, but I’ll have to see if I can find out when that was.

I’m excited to finally being able to WAL with y’all. And what a fantastic show to be doing it with.

Of COURSE you loved seeing his (your) name-drop in the previous episode!

Okay, we have a little bit of time here, so 2 quick questions:

5 minutes! Clues are in the main post above - give a quick read to keep them fresh!

Actually, now that I think about it: who is Dean Finger? Who is he really?