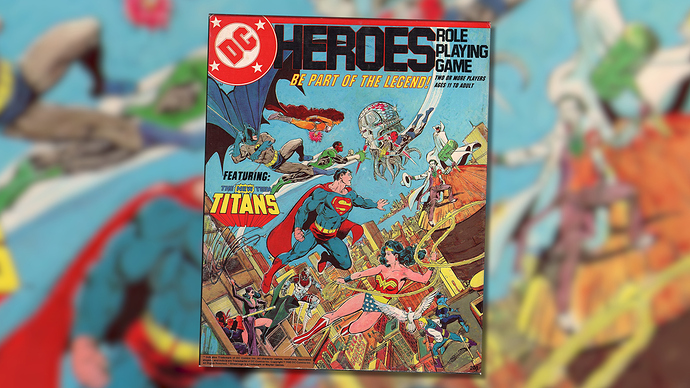 Last week, we met the players, learned the rules, and watched some radical gameplay and role-playing! Join us as we hunt for clues to discover who everyone’s characters really are. Be there or be square!

Where : Right here on the forums! In this thread! In the comments below! Maybe on your phone! But also, you’ll be watching DC Universe All-Star Games on a big screen. So there, too.

THE CLUES SO FAR

Carl: THE BRAIN - In detention, because he was found in the trunk of a car, teacher who found him thought he was playing hooky, actually the WASTOIDS stuck him in the trunk

Dina: THE PRINCESS - boyfriend Rod is fighting ex-boyfriend Floyd in Karate Tournament, purposely got detention to dodge the drama of the Tournament

Katie: THE BASKET-CASE - She’s a bit of a klepto/basketcase, stole Dean Finger’s keys, bad grades, ZERO friends, a misfit with an attitude

Tommy: THE CRIMINAL - No one messes with him because he’s crazy, torments the weak and nerdy with his crew of Wastoids, always in detention

Brooke, Dina’s friend, has mud on her shoes

Since the game take place in the 80s I wonder if there’ll be any reference to Back to the future or to President Reagan!

Man I love the 80s, they had alot of great shows like The A-Teams and movies like The Terminator.

Hahahah they did refrence the breakfast club and karate kid

I wonder which player/character will head into one of the school’s vents, only to have the vent collapse which leads to the principal running into the library asking “What was that ruckus?”, to which the others will respond “Could you describe this ruckus, sir?”.

mentally pencils in a reminder for the WAL

Something cool that I didn’t realize until I saw the interview with the GM on DC Daily is that he actually created everything for it using the rules of the DC Heroes game. I thought it was a campaign made for the game when it came out. Very cool!

I watch the first episode again today! Can’t wait til tomorrow, I’m trying to figure out who Carl is, someone who doesn’t like to get in trouble and a scientist, could he be Barry Allen the Flash?

Did someone ever rewatch the episode and jot down all the clues?

I think they are Barry Allen (The Nerd), Selena Kyle (The Thief), Diana Prince (Popular Girl), not sure about Tommy though, DC has a ton of troublemakers like him but since he does it for the thrill it seems maybe The Joker. That would make it Two Heroes vs 1-2 villains but catwoman was a villain in 80s so it’s not as grey area for her as it is now. I don’t think they are teens like others have said because the GM said to her that she’s surrounded by a bunch of teenagers which means that at least she is an adult.

I love how much you can theorize and solve a mystery in addition to watching people play a fun and hilarious game.

I"m not too sure that the GM wouldn’t throw us and the players for some loops. He apparently made this whole campaign himself, or at least that’s something I read somewhere.

Unfortunately, due to a sudden family tragedy, I won’t be joining you guys for tonight’s watch-along.

Still, I can’t wait to talk about what happens in this episode (theories and all), so I hope everyone participating still has a great time.

Oh no, @BCDC! We’ll miss you for sure and I’m sorry for whatever you are going through right now.

We hope to see you soon!

Until then, thoughts with you and your family and we all send our love!

Sorry to hear that @BCDC. Please know our thoughts and prayers are with you and your family.

Thank you. I didn’t want to be too public with what’s going on (outside of the Iceberg Lounge) so as to not derail threads like this, but I will let you guys know that your words are much appreciated. It’s been a hard day, but you guys made it better, bit by bit.

So, have fun, enjoy the show and I’ll talk to you guys later.

(In character)
As Dick Grayson travel to Iceberg Lounge, he’s met by Oswald Cobblepott! Cobblepott demands what Grayson was doing here?
Grayson said, I was told to meet the Moderator here for all star watch along.
Cobblepott laugh and said if you want to meet the Moderator it’ll cost you big money!
(Roll a dice, and it’s a 5, pay Cobblepott $500.)
Cobblepott thank Grayson for the money, then with a evil grin and said, oh yes, the Moderator is not here til 6:00!
Then he laugh, Grayson by now is furious, should he punch Cobblepott or walk away?
To Be Continued…

Hey @Noyo! I actually have the clues and will pop them into the comments tonight before the show starts!

I just have to say I just watched show because I learned that watch alongs are more enjoyable if you aren’t watching for the first time because your attention is split. It was amazing and I love the players and characters even more now. Can’t wait to see it again with all of you in a few hours.

I’m new to dcu let alone watch along. I only have 1 device though and a little unsure on how to get started. I took the joght off work tonight so I would love to put my day off to good use. ;p