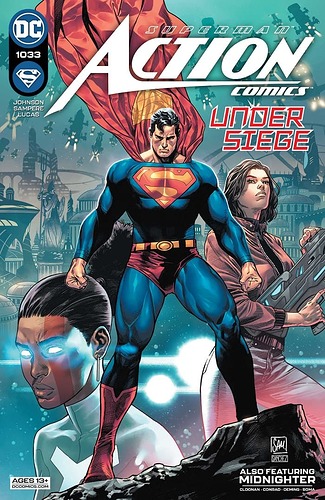 Writer Phillip Kennedy Johnson established himself as a creative force at DC starting in 2019 with the critically acclaimed DC Black Label series The Last God. While that series took place in an original fantasy environment, his follow-up was set distinctly in the DC Universe and starring one of its most famous heroes.

Johnson took on the Superman mythos earlier this year in Future State: Superman: Worlds of War, and continued with a run on both Action Comics and Superman, furthering the contemporary adventures of both Clark Kent and Jonathan Kent and bringing overtures of his futuristic story into the present day. In the current Action Comics arc “Warworld Rising,” a fleet of battleships from Warworld close in on Earth, as Superman’s powers start to fade. Fans who have been following all along can’t help but wonder—is the Future State status quo of Superman imprisoned by Mongul and forced into gladiatorial combat far behind?

Things start to shift further starting this month, with new series Superman: Son of Kal-El by Tom Talyor and John Timms launching in place of Superman , starring Jonathan Kent as the Man of Steel for the 21st Century. Naturally, that begs the question—what’s next for Clark Kent? And what does it have to do with the underwater kingdom of Atlantis? With the arrival of Action Comics #1033, illustrated by Daniel Sampere and out this week, DC Nation spoke to Johnson to uncover the answers to those questions.

To read the interview with Phillip Kennedy Johnson, head over to DC Comics!

Have you checked out Action Comics #1033 yet? Let us know in the comments!

I have checked out Action #1033, and to paraphrase Elaine Benes, “It was good.”

The Superman line has had an exciting July, and the future is bright for DC’s be

Solid issue. Supes putting his foot down and asking the Justice League to help put an end to slavery on Warworld was a highlight; very well written. Sampere’s art is incredible; feels like a cross between Ivan Reis with the beefy physiques and accurate expressions, and Mikel Janin with the very clean lines and seamless flow from pane to panel.

You know @moro, Sampere’s art reminds me of Ed Benes’ wicked badass mini-run on Superman v2 with Mark Verheiden from '04-'05, that began in Superman v2, #217. IDK why exactly, but there’s a quality to it that takes me back to that wonderful run that made me a Benes fan for life.

At any rate, a very solid issue, like you said. With Action becoming Clark’s solo title for the time being, I’m eager to see where it goes, especially as we ramp up into the oncoming event that promises to be “the biggest Superman event since The Death and Return of Superman” as they’ve said.

I like Ed Benes art, but I’ve only read sporadic issues here & there. Would definitely like to check out his Justice League run. I can see what you’re talking about in terms of resemblance, though I think Benes went for leaner designs with more pronounced musculature… or I could be mixing my artists up

I like Ed Benes art, but I’ve only read sporadic issues here & there.

Give Superman #217-225 a read. Some very good Benes art there, along with a squidge of Tony Daniel and Tom Derenick in the mix, for good measure.

Would definitely like to check out his Justice League run.

Keep your eyes glued on the JLBC for that.