It was announced at Toy Fair this past weekend that DC and Walmart have a new collaboration: exclusive blind-bag packaged Batman: Black and White mini-figures!

Produced by DC Collectibles, these are scaled down, preposed figurines based off of their evergreen Batman: Black and White statue line. DC Collectibles is also selling these figures in a seven piece box set that will feature a non-Batman character exclusive to that set. That set is not available at Walmart. Only the blind bag packaged figures are available there.

Series one features Batman as illustrated by the following talents:

The fun thing is, these are out now! Walmart will get a new series every other month. So since series one came out in February, two will debut in April and three will rise in June.

I found a box of these tonight with each figure retailing for $4.98. I’m not a huge fan of the blind bag/box gimmick. I get why companies love it but it can really suck for consumers and absolutely eliminate their interest in a product line when they can’t get what they want with a modicum of reasonable time and effort.

The one benefit of blind bag/box items is when companies include a marking of some kind on the package so you can figure out what’s what inside. Among others, Mattel does this with their blind bag Imaginext figures (DC and non-DC flavors) by putting a different number on each figure’s bag so that you can…wait for it…actually know what you’re getting and get what you want! Boy howdy, satisfied customers; what a concept, huh? Sadly, DC Collectibles has elected to not follow that path for this line.

Going back to what I found: I thoroughly looked over the first bag I picked up (the box looked to be full, I surmise I was the first to look at it) and saw nothing to differentiate one package’s contents from the other as far as a marking anywhere on the package. So I threw a Batarang of Chance and picked three figures: all of them were the Frank Quitely Batman. Oh well. They’re nice.

So…this is a neat line that I wanted to spread the word about. DC Collectibles would have been so much wiser to put a small number or letter somewhere on the package so people could know what they’re getting and easily pick up the set. Again, I understand the marketing/thinking behind
blind bag/box merchandise but it’s nice to easily get a hold of what you want to without buying a bunch of duplicates, especially at $4.98 a figure.

Again, these are exclusive to Walmart, so go get 'em! Good luck in getting the set =)

I saw the line announced and can’t wait to check it out! Like you though, I would have preferred a hint or something to avoid just buying the same figure over and over, but going in blind is really popular right now.
Maybe once more people start picking them up someone can organise a swap haha

I did just grab right from the front of the box, so maybe if you pick from around the box your odds at different figures increase. Mayhaps the weight differences are apparent too when you actually get different pieces.

If you (and anyone else reading) pick these up, I’d be curious to hear what you got.

This utterly reminds me of the Magic card pack concept, where lots of money can go a wastin’. Sorry for your (monetary) loss, @Vroom.

Thanks though for warning the rest of us. Now I will 1) look for this marvelous box and 2) only purchase one.

Don-El, I can find uses for the duplicates, though two different figures would’ve been the better get.

Curious as to who you find.

My buddy snagged three of these. He got one Frank Quitely Batman and two of the Darwyn Cooke version.

Anyone know if they’ll have Gerard Way’s eventually?
Also, was the name of his story Kingdom Of The Mad? I feel like it was along those lines

The 7 figure set that will be sold at comic shops and online,will have an exclusive figure,this figure will not be in the blind bags.

@YazzyYaz, while I did mention the box set, I forgot to specify that it would be sold at comic stores and online retailers. Thank you for the extra clarification on that point

Have you bought any of the WM releases or are you getting the set?

@Haru, Kingdom of the Mad was indeed the name of Gerard Way’s unused Batman pitch. His Batman design is quite unique.

Picked one up today and got the Jason Fabok figure ! It’s awesome!

@HarleenNapier I got the same one today! It’s pretty cool. Also got the Darwyn Cooke one as well

Congrats on the pick-ups

Thanks again @Knightnight and @Vroom for you helpful suggestions on how to select these 4" Batman figures without duplication! Without further adieu, here are my bounty from earlier this evening! 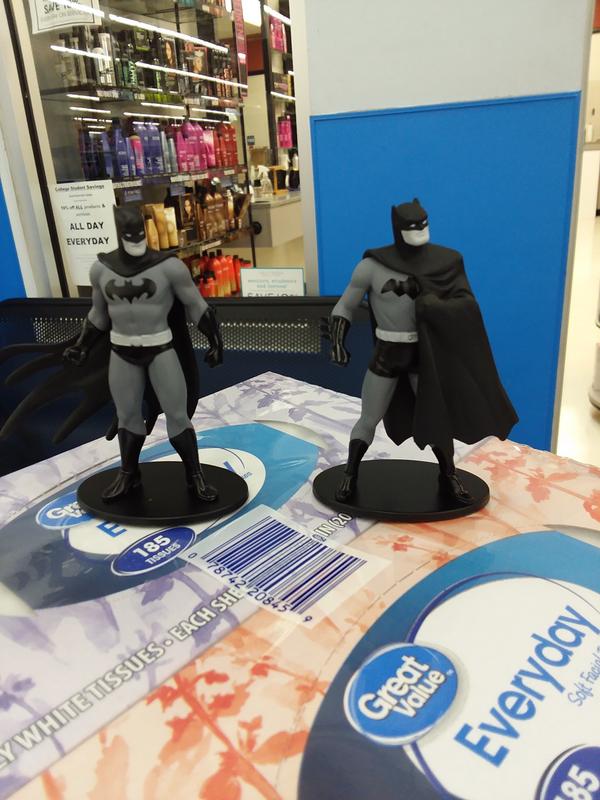 Picked up 2 today and got Darwyn Cooke and Frank Quietly

. Would like to find Jason Fabok in this series.

They are really awesome! I was surprised at how good they look

I didn’t know these are Wal-Mart exclusives. I was looking for the new 100 page Giants a week of two a go and was on what’s this. I have the Amanda Conner, Dick Sprang and Darwyn Cooke Batmans (or Batmen?). I don’t mind buying these as much as most other mystery figures because the price isn’t bad and no matter what you get Batman. I’m just not a fan of paying $10-12 and getting figures I couldn’t care less about. I bought one Bombshell mystery figure got the chase Wonder Woman and was like I done. I look forward to buying more BM Black and White figures as long as I can find them.

@OverSizedGeek, Fabok seems to be the top choice for everyone, myself included.

I bought two Black and White figures yesterday got two of the Jason Fabok Batmans. At first I thought got two more Amanda Conner Batmans which would have put me at 3 total. I’m still surprised I’m only two figures short of having series 1 after buying 5 figures. I haven’t had the best of luck with some blind bag figures. One DC blind bag series that was $2.50 - 3.00, it seemed like every second figure I bought was either the Joker or Lex Luthor. So I just quit buying them and I’ve not been the biggest fan of blind bag figures ever since. And the high price of most blind bag/mystery figures doesn’t help matters. But the price of the B&W figures and the fact that at least with S1 I’m gonna get a figure I want I’m not as opposed to buying them.