Wally West is a national treasure 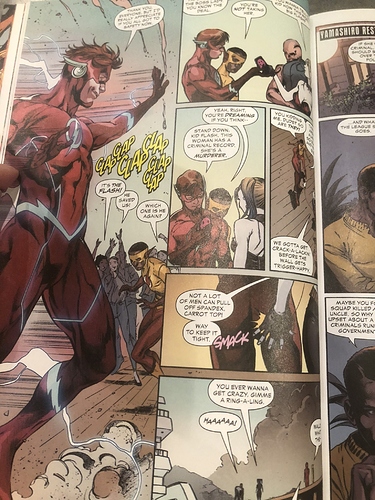 Also if you haven’t read teen titans full throttle you should definitely check it out, I was originally a little skeptical because I’m not a huge Damien Wayne fan and I’m pretty partial to the original Titans, hence this post being about Wally West, but I was presently surprised.
“Not a lot of men can pull of spandex carrot top, way to keep it tight.”
Legitimate highlight of my month.

I think by now some on this app know how I feel about the original Wally West. He is the heart and soul of the DCU .

Have you read heroes in crisis? Cause I’ve got some feelings about the ending​

Wally is a national treasure in the sense that he should be put in a sealed box and stored in a warehouse never to see the light of day again.

When I read this in the Flash 80 Years book I almost fell out of my chair. 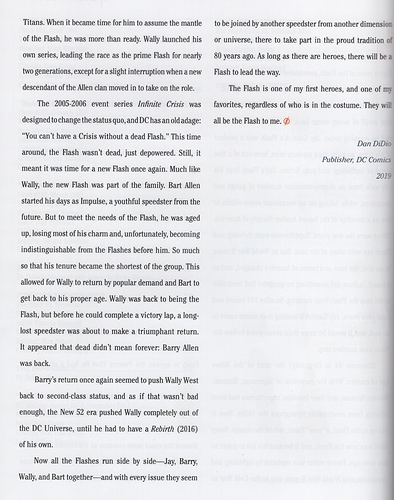 I always felt bad for hawkman and how he would constantly get screwed over character-wise, but now…Wally wins. And now i cant decide which "crisis " book i’d wipe away, identity or heroes in-.

I really enjoyed heroes in crisis, the whole premise of superheroes dealing with trauma in a relatable way, isn’t something that should just be wiped away, however clearly I have some major issues with the Wally West of it all. Him being the killer was not at all necessary for the impact of the story. There are literally thousands of other characters to choose from and there’s just no good way for him to come back from this, which honestly breaks my heart. I’m sorry but Wally West has been the Flash for over twenty years, yeah I like Barry Allen but unless you were reading comics in the 70s he wasn’t the Flash. I just think Wally gets overlooked and lately ■■■■ on and I’m just not okay with that.

I can’t feel sympathy for Wally. Barry got the short end when it came to COIE, although he showed he is the top of the Flash food chain. His heart and heroism to make the supreme sacrifice without hesitation, if that is what was needed.

And yes, I read Flash comics as old as the late 50’s to 1985 when Crisis occurred. So he was “my Flash”. However, when looking objectively at the various iterations, Barry didn’t need the deus ex machina of the speedforce to tell his stories, unlike Wally & Bart. That is the difference.

Even in the broader scope of things, it took the demise of Barry Allen for Wonder Woman to fill the void of being the “heart and hope” within DC comics. So for all the good points in the Wally column, they don’t tally up as high as Barry’s column.

And for all of the Wally fans out there and your sense of being screwed over, I have zero sympathy with. At least it didn’t take a qtr of a century wait to get “your Flash” back.

You forget that the Speed Force was in fact, the door that was opened to bring Barry back.
Back in 1985 when Crisis first happened, It was decided (fairly early on) that Barry would be a casualty of the event. . Carey Bates was given a year’s advance notice that Barry was headed towards his finish line and was given that time to “put Barry’s affairs in order”
For whatever reasons the powers that be at t the time had, Barry Died. I’m not really sure you can say he got the short end of the stick however. Yes, he died within months of being given a new lease on Life. (Being reunited with Iris, getting cleared of the charges against him for killing Reverse flash etc etc…)

However, despite the suffering he had endured during the Crisis, Barry went out in a truly heroic style. Unlike the current TV show that has dangled this obituary in front of him from Year one on, Barry’s knowledge of his inevitable fate is brought about by rational thought. He’s dealing with a cannon that uses anti-matter as a power source. he can already feel it draining his life energy. regardless of whether he can stop it or not, he knows he’s going to die. The thing that make’s Barry’s sacrifice so heroic is that it never even occurs to him to cry or lash out at the fates for his predicament. He chooses to be the One Life given to save billions.

This is also why Barry had to stay dead for so long. A Sacrifice of that magnitude had to be honored at length. People had to deal with the loss of One of DC’s most important heroes. It helped that The Who’s Who entries about Barry, had stated that he became the lightning bolt that gave him his powers so he essentially got to live and relive his Flash career over and over again in and endless(?) cycle.

True Wally West would take up the role of the Flash almost immediately after Barry’s death was revealed. To many this would have seemed as being too quick a replacement. We killed off Barry and now we have Wally here to take his place…just like that?

Well, not Quite. Wally’s early years would be a long painful process of coming to terms with that loss. Don’t forget. Wally wasn’t just Barry’s sidekick. He was the world’s biggest Flash fan! He idolized the Flash long before he met him, got his own powers, became Kid Flash…and then found out that the Flash was his aunt’s boyfriend. So After years of being Barry’s number one fan, you can imagine how devastating it was for Wally to lose his Uncle and his Idol all in one day!

So for the first Six Years we had a Wally West Flash who was struggling to live up to his idol’s memory and reputation. Now, during these years, it was already said that there was a loophole to return Barry Allen to the DCU. however, the problem with this loophole was that it would be a “living on borrowed time” situation. Barry would be brought out of his desperate run around the Anti-matter cannon and returned to the current DCU, but someday he’d have to be put back in that moment and continue on with his sacrifice.

Eventually as Wally grew into the role of the Flash and his speed increased (he was only able to run up to the speed of sound in the first year or two of his run.) He started becoming less of a stand -in for Barry and more of his own hero.

Then Mark Waid and Brian Augustyn set Wally on a series of events that served to purposes. The first was to cement Wally West as every bit the hero that Barry was. The second (which may have been unconscious on their part.) was to provide a method by which they could permanently return Barry to the DCU without any need for him to return to his death in the Crisis.

First of all, they had to make Wally truly Barry’s equal in terms of speed. to do this, they used the Reverse Flash and transformed him from just a master criminal from the future, to being an obsessed Barry Allen fan. At the conclusion of the story, Wally has managed to bring his speed up to Barry’s level. (although he still has a problem with vibrating through solid objects.

A couple of years later We had Terminal Velocity. This was important because It introduced (formally) the Speed Force as being the actual source of the DC universe Speedster’s powers. (Heavy Water fumes, electrified chemicals and memorized mathematical formulas were now merely triggers that enabled speedsters to tie into something that was as infinite as the Emerald energy of the Green Lanterns. However, the speed force wasn’t just a power source. It was also a Valhalla. a place where Speedsters went when their time in the living world was up. However, it was also a revolving door. When a speedster had something that made them want to live in the world and leave the speed force, they could do so. For Wally, it was Linda Park. For Barry it was Iris.

Granted, it took a few more years to get around to bringing Barry back. They couldn’t just say “We have a way for Barry to come back so lets do it!” They had to give Barry a return that was as fittingly triumphant as his death had been heroic! It had to be Epic! Final crisis may not have been as Epic as it could be. but the situation was dire enough within the pages to suffice as a reason to pull Barry out of the speed Force and bring him back to Iris… And de-aged her as well (she was in her fifties or sixties since she came back during Wally’s run after all!)

Now by contrast Wally was given a much shorter end of the stick in his dismissal. Wally wasn’t given a heroic send-off the way Barry was. He wasn’t given a year to put his affairs in order. He was pushed off to the side. Now Wally being Barry Allen’s biggest fan, he had no problem with Barry taking the center stage in the DCU upon his return. After all, he had been gone for years! (decades to us fans) Wally no longer suffered from the feelings of redundancy that he had when “Barry” had seemingly returned before.

However, tptb at DC weren’t as considerate. They saw no reason to honor Wally as their predecessors had honored Barry. They chose to shove him in the corner and then, when they had the first chance…they deleted Wally from continuity entirely. Evaded or denied questions and requests for his re-integration and then tried to replace him with someone with the same name but so completely different that it was just pouring salt on the wound.

In short, When Barry was killed in the Crisis, he was honored. canonized, practically Deified! When Wally was dumped he was dismissed, buried and his fans ignored.w