VOTING CLOSED! Your Complete Guide to DC's 2021 Round Robin Brackets

Who are these monsters who are NOT voting for the Super Pets?!
Y’all there is a MONKEY in a little CAPE! 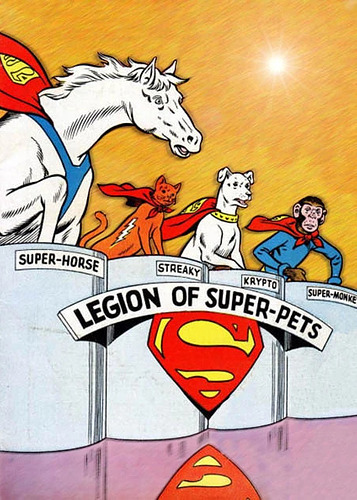 It’s all fun. No matter who wins we all get to feel like we had a hand in choosing the book that gets made.

(I doubt she would be part of the team, the description sounds like it’s a bunch of younger peeps)

See, I figured that she absolutely WOULD be on the team, probably as leader.

That’s what I thought at first, but she’s a pretty big character, and the description would’ve probably name-dropped her. The way it’s written, makes it sound like it might be completely new characters with maybe some existing ones. But yeah, knowing who the team is would’ve been super helpful!

And hopefully it would go on for many years!

If I were to wager a guess, I figure all of these books are being made with the idea that these will probably be six-issue mini-series. But, I would hope that if successful, they would launch a new volume or just keep the numbering going.

Also, I guess I’m the only one not feeling the title of the book? I dunno, maybe it’s just me being more old-fashioned in the community. It just feels weird to have what used to be a slur on the title.

And if JLQ beats Robins then I hope they make some already existing heroes queer, or at least hint towards that

I am a firm believer that every Robin is bisexual

But yeah, upon reflection, I don’t think JLQ should have been part of this Round Robin. Queer spaces shouldn’t be something we have to vote on to open up. This should have just been greenlit.

That reminds me, who would you guys put on a LGBT Justice League team?

My vote goes to:

I’d honestly be happy with any book. I think the exciting part is how dc’s letting the reader interact with the books like this.

Also, I guess I’m the only one not feeling the title of the book? I dunno, maybe it’s just me being more old-fashioned in the community. It just feels weird to have what used to be a slur on the title.

I can totally see that, but I think by now it’s been completely reclaimed. I think at least for myself I have been hearing people using it constantly for about 4-5 years if not more. I suppose it depends on how old you are, too, but I imagine most Millennial and Gen Z folks who are LGBTQ wouldn’t think twice about it. One of my favorite podcasts is Queery with Cameron Esposito. I think it’s been on the air since probably 2017.

Wait, which Artemis? And how did I not know this about either of them?

This should have just been greenlit.

Also, it seems like from the pitch that the 8 JLQ members will be younger heroes, or perhaps even entirely original heroes. Not sure how many established queer characters we’d even be seeing on it. I’d hope for, like, Aqualad and Thunder, at least.

That’s a pretty damn awesome team! I love Nia Nal, so I would find some place for Dreamer, too.

Y’all there is a MONKEY in a little CAPE!

There’s also a cute kitty! This would be an amazing one-shot.

Artemis the Amazon. She was confirmed as bisexual during Scott Lobdell’s Red Hood & The Outlaws series.

Does it have a cute kitty cape?

Oh, definitely! So many great heroes to choose from – I was initially thinking of characters who would be analogues to classic JL members, which a mix of a couple younger/non-franchised heroes a creator could play with.

((also there are dc emojis on here?! idk why I’m surprised but I am fdndj brb gonna just stare em now))