Voter and Defend - Round 4, one more to go 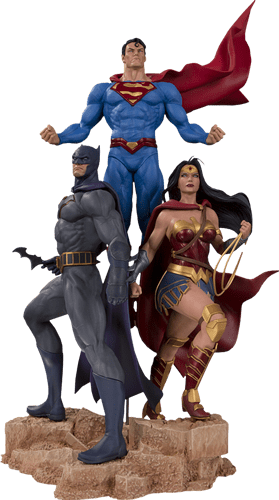 480×860 490 KB
Pray, enter the Historian’s Salon for High Level Discourse and find a comfortable settee to lounge upon. The question before us tonight deals with what the members of DC’s Trinity symbolize to the broader American culture and whose impact is most significant. Beyond their chronicled adventures, Superman, Batman and Wonder Woman have come to represent ideas and ideals sometimes as easily expressed as Truth, Justice, and the American Way, sometimes more complex and subtle such as the concepts of vengeance or mercy. Give this your due consideration, vote and defend that vote.

Return hence in two days for the final question.

Superman comes from Science Fiction
Raised by parents to be American, though he is really an illegal imigrant.
Basically decent, goes against the mob in TV Superman and the Mole Men
Hides what he is from almost everyone, in an effort to blend in
But often plays the fool, so doesn’t get respect in his alter ego. And Respect is what men want nost
Feels like the world is made of cardboard relative to his powers and must hold back in most instances, lest he destroys his opponents utterly.

Wonder Woman comrs from myth.
She knows the Greek Gods personally and is often ambivalent toward them
A warrior willing to kill, unlike the other two.
Supposedy a proponent of love. Yet we often don’t see it
Of the three, least to question beliefs.
A living contradiction, though she doesn’t see it.

Batman comes from Noir and the violence of the pulps.
Of the three, least emotionally.matute.
Constantly asking whether his parents would be proud of him, even though he has saved Gotham and the world countless times.
When fighting criminals, reframes from killing or disabling gently. Uses technique to hurt, badly
Surrounded by Bat Family yet alone.
As in ‘To Kill a Legend’ story, in Detective 500, angry all the time because of death of parrnts…
Uses techniques that doesn’t solve the situation.yet doesn’t change approach.

Batman.is a vigilante, above American law. He knows better than others what is right.

Superman believes in the ideals of America, as most imigrants do. More so tham Amerivan born here.
He is Other but masquerades as a human. Two sided.

Superman is Clark.Kent, but they are different

Batman true face is Batman. Bruce Wayne is not real to him. He discards the identity unlesd he must put it on

Wonder Woman has no alter ego.

I can’t even try to begin to create an argument for Batman or Wonder Woman being more entrenched with American idealism than Superman. Yes Wonder Woman wears the stars and stripes, but Superman openly discusses that he fights for the American way from time to time. He embraces the ideals of America in ways the other two are not able to do.

While I really want to vote Superman, I had to go with Wonder Woman for what she represented to women in general and the woman’s movement in particular in 70s. There’s the famous story of Gloria Steinmen talking about why she didn’t like Diana loosing her powers and going with the white suit as she was the one strong symbol of women’s power among superheroes. She also appears on the cover of Ms magazine. I think that feeling of connecting WW to women’s empowerment was also very apparent during the run of the Jenkins/Gadot movie and the reaction to it among women who did not normally go to superhero movies.

Here is the timeline for what you were talking about, from my super hero history

1968 Comic Books Wonder Woman surrendered her powers to remain in “Man’s World” rather than join her fellow Amazons to another dimension where they could "restore their magic’ (part of her motivation was to assist Steve Trevor, who was facing criminal charges). This new era of the comic book was influenced by the British television series The Avengers, with Wonder Woman bcoming like Emma Peel. Diana Prince ran a boutique, and fought crime. Denny O’Neil and editor/plotter/artist Mike Sekowsky

1972 Magazine Ms Magazine Gloria Steinem, who grew up reading Wonder Woman comics, was offended that the most famous female superheroine had been depowered, placed Wonder Woman (in costume) on the cover of the first issue of Ms. (1972). Warner Communications, DC Comics’ owner, was an investor which also contained an appreciative essay about the character.

1972 Comic Book Hardcover
reprinting the Golden Age Wonder Woman stories of Marston and H G Peter. Gloria Steinem selected the stories and wrote of them, "Wonder Woman symbolizes many of the values of the women’s culture that Feminists are now trying to
introduce into the mainstream: strength and self reliance for women; sisterhood and mutual support among women; peacefulness and esteem for human life; a diminishment both of ‘masculine’ aggression
and of the belief that violence is the only way of solving confiicts.

They won’t work directly on site

Second video can start at 11 and a half minutes in.

Hmm, so, while Superman may represent the American ideal, it seems Wonder Woman may have had the larger impact on American culture. That’s interesting.

I would point out, though, that as the original and most preeminent super hero, that it’s possible neither other hero exists without Superman. Heck, it’s possible the American art form “comic books” wouldn’t have taken off as they did without him.

Didn’t know it was issue #1 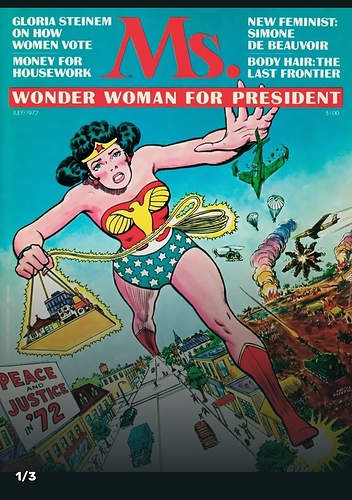 Issue no 1 of Ms Magazine

The video in our library

Secret Origins the Story of DC Comics talks about the depowering of Wonder Woman around minute 54 including Denny then and now.

Earlier is the origin.of Wonder Woman and her creator, who was a psychologist and who worked on the lie detector ala her magic lasso

The early Wonder Woman starts in the video around 17 minutes forty seconds.

Superman is from Kansas - the heartland of America. He was not in a privileged setting (wasn’t rich, and wasn’t a royal), and he works as a reporter (not a CEO or a champion for peace in man’s world). He may be super-powered, but he’s influenced by his humble and very American upbringing and circumstances. As such, I think he’s more connected to the “broader American culture” than the other two.

and whose impact is most significant.

Most significant impact to culture : Wonder Woman. Wonder Woman has been a beacon for women, female empowerment, and love since she first appeared.

That’s a very nice breakdown for each, but now I have no idea who you voted for​

I voted for Superman because I think he symbolizes the broader American culture more so than the other two.

While I don’t agree with the idea of the Trinity, because I find other characters far more interesting, they are, unfortunately, the most recognizable to the mainstream public. As such, they are the ones we of the comics community use as a “gateway drug “ to hook our uninitiated friends into the multiverse.

I voted for Superman because he was the first (at least of the Trinity) and remains the most unchanged from his initial concept. 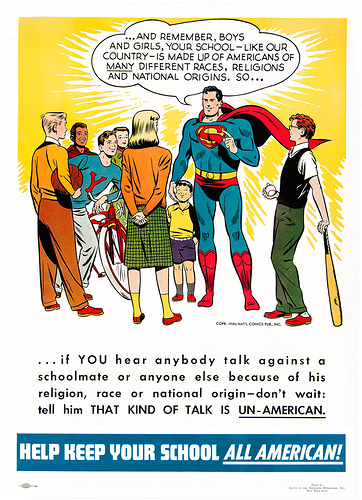 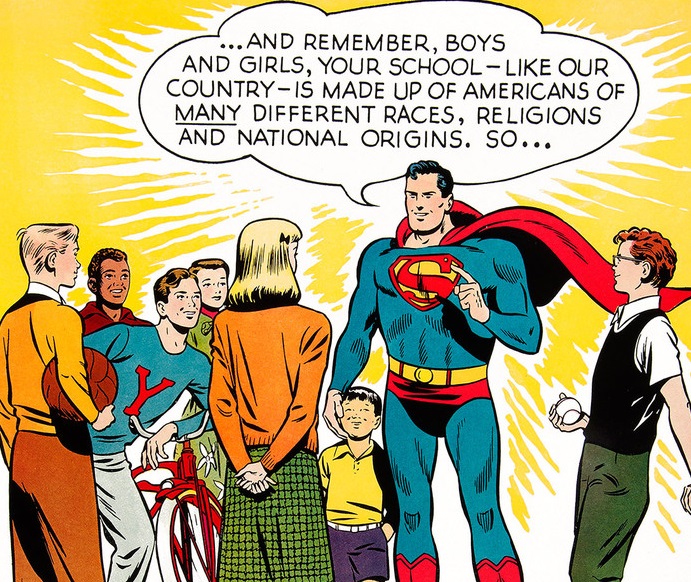 In a recently much circulated image of a 1950’s-era color poster, Superman can be seen speaking to school children about the importance of respecting diversity.

I voted Wonder Woman. She is the only one of the trinity who has actually influenced a real life American movement in the 60’s/70’s feminist era.

I’m going to vote Superman. His character was the first and without him all the others might never have existed. To me he embodies that immigrant spirit, among all the other things, that as someone like myself can really relate to. My paternal grandfather immigranted to this country in the nineteen teens so that makes me only the second generation of my family to be born in America.