Vote and Defend Round 3

I call this History Town, Historian Town Meeting to order. Now, I’m just a humble small town historian. I don’t truck with no big city history ways. But, it seems to me that DC Comics has a long tradition of publishing titles dedicated to genres other than superheroes. Why, they’ve published romance, western, combat, and even humor titles without a cape in sight. What this here town meeting needs to decide is which of these genres is most important for a proper historian know to understand the history of DC comics. Everyone here knows to vote and defend that vote below. 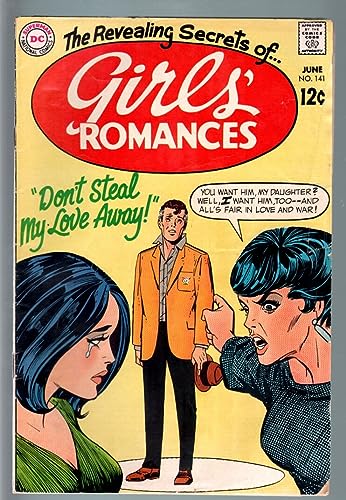 The only semi romance I new were from Stan Lee like Millie the Model or Patsy Walker, who became Hellcat decades later or Archie.

I know Jerry Lewis and maybe Bob Hope existed but I never read them.

Nor any westerns like Jonah Hex even. Closest I got was Turok Son of Stone.

But Combat I knew Sgt Rock Enemy Ace Unknown Soldier. Over at Marvel Sgt Fury and the Howling Commandos (Volume 1 is great with.Captain America and a story on.Racism, with a fully intergrated team, in the early 1960s)

@tuxnut Dude, I loved you adding that. This club is what the members make it. So far, they’ve made it awesome. I just don’t believe I overlooked horror when I used to buy them as a kid. Unfortunately, you can’t edit a poll after 5 minutes.

Adding my secret #1 vote for horror, but also voting in the poll!

Even some super heroes like Spectre reside in horror, especially thd ones in the Adventure comics version.

Mystery without recurring characters revolved around a mixture of plot and unease, often with a twist at the end.

Horror with recurring characters felt more closer to reality than the super heroes to me snd grew as you became more familiar with the characters and their woeful situation. Swamp Thing sure but even Animal Man often dealt with a kind of hortor.

I entered the comic world around 85. But I didn’t pick up any DC until around 88. By then, it was solely a superhero company. However, I remember the local library always had a collection of military DC comics.

I chose westerns primarily because I was a big fan of the shows growing up (John wayne, bonanza, etc). Thus always loved reading Jonah hex, and Bat Lash. Are there any other westerns in the DCU library that the group also would recommend?

I would agree with the assessment of Horror, but when I think of the overall history of DC comics I had to go with humor because it permeates through a lot of titles. While there were specific titles like Bob Hope, if you even look at some of their less specifically humor and more superhero comics throughout their history humor as a genre has played a vital part. I think of titles like Superman’s Girlfriend, Lois Lane or even titles like the older “The Joker” title that can be found here. These important classic series were humor comics often. Without this genre I think DC could have leaned even more heavily into dark and gritty than it has, but their history in the humor genre has allowed them to remain a balance that other companies haven’t been able to do because of their history not encompassing it.

Have to go with humor . As a small kid, I loved superheroes but I also remember reading Rudolph treasury editions ! And I not only read sugar and spike reprints, but I read them in Spanish

Note: if horror was an option, I may have gone that way.

The most important for a DC historian to know…

I’m torn between combat and western because they’ve both had influence even on recent goings-on. Blackhawk still pops up sporadically and knowing that history gets you into Quality Comics and their relationship with DC. Then you have Enemy Ace, Sgt Rock, etc.

On the western front, Jonah Hex is awesome and has been around for a long time and All Star Western gets you into how superhero comics almost died out. Bat Lash pops up sometimes still. And Nighthawk is now one of Hawkman’s reincarnations.

I don’t know, both seem equally important to me. It’s important to know that DC was involved in those other genres, but not the details (not considering Horror here, of course).

Now, if y’all excuse me, I’m going to go find some funny animal comics to read…

First, please remember I’m not as knowledgeable as most in the community when it comes to DC history (thats why im here, to learn). However, as it pertains to the question and the poll choices I had to go with humor.

I believe there was a time post WWII that Superman and Batman lost their appeal and DC leaned into humor pretty heavy in their comics. There was also that whole comics authority debacle.

I’ve had to think between Western and Combat. As @tuxnut shows above Romance had a significant run, but no lasting impact once they faded. Humor, you could say evolved into super powered humor like Teen Titans Go. In the end, I’ve gone with Combat. Not only do you have the titles and characters that still ran strong into the 70s, you have a presence in Blackhawk and Rock today. In WWII I think a lot of the Superhero titles had combat comics as a backup. So, that’s the way I went.

My vote, from a historical context is Romance.
Yes, one can argue that Combat, Western and Horror were more popular.

However, even for as sexist as they seem today, they were the first foray into finding a way to bring girls/women as a demographic into the comics genre.It made comics realize that there was a potential to bring in a major demographic. Had it not been for Romance comics, there would not have been the surge of female superheroine characters once the feminism movement gained traction. That was the opportunity to for female characters to kick in the door. And it took another generation (or two) to take some of those talented fans and have them become key creative talent in comics.

While not the fiscal impact of other genres and even a hiatus until changes in our cultural landscape happened. Romance comics were the initial experiment that showed females could be interested in the comic book medium.

Historically speaking, from those who consume comics in the modern world, female writers and artists, to the entire realm of female heroes and villains that populate pages today. Romance comics paved the path by proving if you could find the right cultural hook, there was an entire fanbase just waiting to be spoken to.

Thanks @msgtv
Analyzing history, one must always take into account the context of its time(s). A specific piece or aspect of history never exists in a vacuum.

It’s the same reason I will argue that Julie Newmar is still the high bar for Catwoman & Lynda Carter is still a bit above Gal Gadot in WW. When you look at their portrayals relative to their eras, they were truly ground breaking.

It is the case with history, for myself anyway, to wonder if you could pull JN or LC out of their eras and bring them forward to the present day, when strong, independent, fierce female characters can be portrayed, just how much further they could take their performances.

I would say humor if only because in times of trouble throughout dc comic history there has always been humor to shed a light on the everlasting darkness. If not for humor you might drown in the sorrow, pain, and anguish of the comics you are reading possibly making the comics less appealing to you in the long run of things.

I’m leaning towards Combat because of the involvement of Joe Kubert. A giant in the industry, founder of the Kubert School, artist on Sgt. Rock and Enemy Ace. Also Robert Kanigher and Russ Heath. I’m less informed on the non-superhero properties so I will limit my comments and wait for a final vote after I receive more info from our fellow historians.

So just curious, but looking at this list I’m wondering how do you all categorize titles like Betty and Veronica? Does that fall under romance or humor or both?

@stenger3775 if forced to put into one category, I’d go humor, but there’s a Ph.D dissertation in the answer to that one

I’d also think of them as humor comics.