Hello, party people hope your having a good day! So I went into a antique shop around me and found a personal grail! I’m even starting to look at a protective display case for it! Check out the awesome In the card original Vintage Superman! 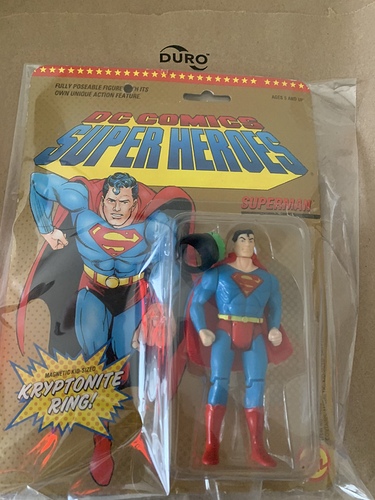 That is nice, did the shop know what they had and price it accordingly, or was this a great find and deal?

That is one sweet find.

Thank you guys also @discordia57 it was $40 bucks

That’s not unreasonably priced. Though of course, one would like to find that kinda thing at a clueless shop for 10 bucks. I saw a video on You Tube a few weeks back, with a guy talking about finding a Hulk 181 at an antique store, in poor condition, but he got it for 5 bucks! I still have that Supes toy from my childhood. It’s essentially a “Super Powers” knock off mold, but it does have the Kryptonite ring, which when brought near Superman, makes him shake and fall down.

I had this figure when I was a kid. It’s from 1989 and was part of Toy Biz’s DC Superheroes line. @discordia57 is correct in that they re-used molds from the Super Powers line, but added gimmicks different than the Super Powers line where you had to squeeze their legs to get their action feature.

You found one on card in amazing condition.

I had that figure. I didn’t have the super powers one so I used this figure

That is an Awesome find! I loved these figures when they came out. Can’t remember if I had Supes, but I did have most of the Bat villains from that line.

Oh what I would give to still own all my childhood toys.

I loved these figure growing up. Great stuff.

I love this figure. It was my first Superman when I was a kid, and remains one of my all-time favorite figural renditions of The Man of Steel to this day.

Super Powers came about when I was very little, but Toy Biz’s DC Comics Super Heroes line came out at just the right time. It’s still a fun line too, especially the figures that used Kenner’s Super Powers molds.