UPDATED: A Map of DC's Earth!

UPDATE:
After realizing that taking this project further would mean that places couldn’t just be “the Green Arrow city” anymore, I decided the only way to make it work would be with an interactive map! I had a number of sources on this iteration, including the DC Wiki, Comicvine, Wikipedia, the Atlas of the DC Universe, and not least of all, comments and suggestions from all of you guys! That being said, not everything here is super-ultra accurate. Some positions are a matter of picking arbitrarily from a number of equally canon sources, some are based on geographic features, some actually required some math to figure out! So, if you have any questions or are looking for sources, try the links provided with most entries - and if they don’t help, just ask! I’ll be updating this as I find new information (and I’ll probably get some more uniform icons at some point) so stay tuned and keep your suggestions coming!

Oh yeah, I also added a few international locations! The international stuff tends to be even more vague and inconsistent than the American stuff, so I tried my best to include as much as I could without taking too many guesses! 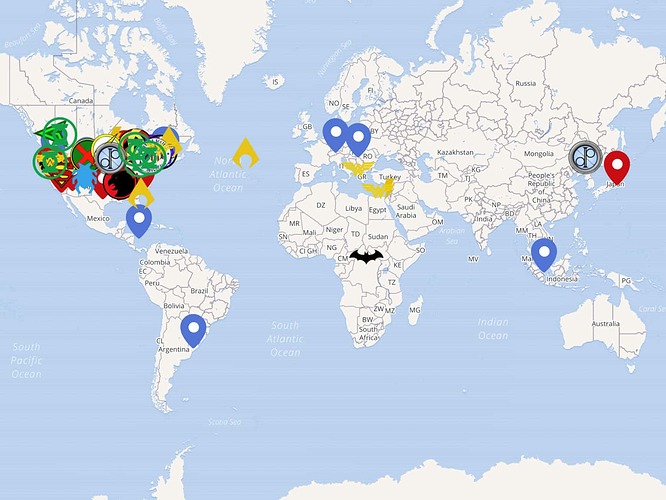 A work-in-progress map of every notable town and city - fictional and non-fictional - in the DCU!

Got one for you St Roche, one time home of Hawkman, should be in Louisiana

I gotta say, this is awesome! Great job dude.

Thanks so much, everybody!

Ooo! I’ll be sure to add that one!

There are no famous Texan supes?

Recently read New Krypton. I think Guardian (Jim Harper Original Clone) and Greg Saunders were living in Warpath Arizona (I think that’s a made up DC city, but maybe some Arizonian can verify).

i think Apokolips is ft worth

There are, actually! I just did some more research, and Texas has three notable cities, only one fictional: Dallas is home to Hal Jordan’s cousin (also named Hal Jordan) Air Wave, Goldrush, and three members of the Darkstars; the fictional Dos Rios, home to Rafael Sandoval’s El Diablo; and the most famous super-Texan is from El Paso - Jaime Reyes, the Blue Beetle!

I’m trying to keep things limited to the US, for the sake of my sanity and the size of the map

Unless…wasn’t there an earthly town of New Gods once? Or am I confused?

Hm, I’d thought Star City was in California and GA in Washington was just when he went to Seattle.

I also had no idea Hub City was in Illinois, but I had no idea where it was just in general.

To quote my sources, " Over the decades, Green Arrow has divided many of his adventures between the real city of Seattle, Washington and the fictional Star City — which early sources place in Northern California. But in the Rebirth Era, these two parts of Oliver Queen’s career are reconciled by establishing Star City as an alternate name for Seattle itself. This fact remains a point of contention amongst Green Arrow fans to this day."

Ah, so that’s a recent retcon. Got it.

I don’t know, been awhile since I saw any parademons around. That could have been Desaad at Sam’s Club the other day, though.

i’m sorry for insulting your home. if it helps, i live in a scorpion ridden desert (two hours southwest of ft worth)

Ah…that must be where the demons lie. We’ll send out Blue Beetle.