Let’s say that one DC character goes to the Marvel Universe and vice versa. Who do you choose?

I think I would like to see Hulk come over to the DCU and see how the power players deal with him and maybe Wonder Woman going to Marvel and leading the Avengers and showing how it’s done!

Batman to Marvel… think it would be fun seeing two billionaire heroes with very different personalities play off each other in Bruce and Tony.

Wolverine to DC. I like Logan’s no nonsense attitude, plus it would provide for a lot of cool action scenes.

I’d trade one Captain Marvel for another. We get Carol Danvers. They get Discount Superman.

Marvel to get Martian Manhunter

She-Hulk, Martian Manhunter, and the Marvel - DC trade that almost was 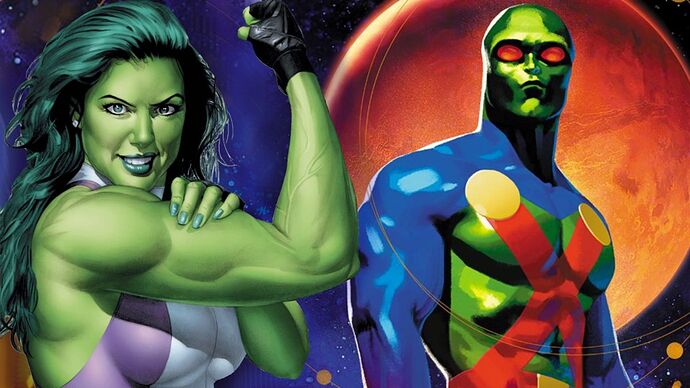 She-Hulk, Martian Manhunter, and the Marvel - DC trade that almost was

How close was this Marvel and DC comic book legend to reality?

Moon Knight would go to DC. With his roots in Egyptian mythos he would fit right in with a lot of DC characters. Darkseid would go to Marvel so he could deal with his discount version (cough Thanos cough).

For the record… when I answered this, it was under the assumption that it was a one time deal… borrow and give back

For a more… ehem… permanent trade:
Marvel can have The Batman Who Laughs… provided he show up in everything and annoy everyone for at least a year straight.

I would start by kicking him out of the team.

Oh baby, do I have a comic to recommend to you. Try DAMAGE (2018) on DCUI, where the premise is pretty much exactly this.

I would trade Superman to marvel in return for Daredevil because I’ve always wanted to see them team up and clear out Gotham of all organized crime in like a month, not to mention the dialogue of the two of them working together has the potential to be some of the best crime solving banter ever.

Way back in the 70s the Hulk went toe to toe with Superman, and lost. But I’d love to see Wonder Woman leading the Avengers.

My first choice would be DC’s Nightwing for Marvel’s Daredevil. Nightwing swinging about Hell’s Kitchen and getting a lot more female followers while Daredevil is a more no nonsense type cleaning up Bludhaven. Then I thought Catwoman for Black Cat, but would anyone even notice the difference? Then I decided on Batman for Spiderman. I can see Batman, striking from the shadows and taking down Doc Ock, Green Goblin and Kingpin. While Spidey would have his hands full with Joker, Killer Croc and Two Face.

Bruce and Tony going at it would be a very interesting comic. Flashy showboat vs dark and broody haha

While I love Captain Marvel (Shazam) I would love to see him in Marvel and Carol in DC!

Craziness! Would have been very interesting to see how their characters would have developed if this went through!

Moon Knight teaming up with Hawkman and Doctor Fate with their Egyptian ties would be super cool!

Need to read this, has been on my list for awhile since it launched post-Metal but my reading list is seemingly endless, so someday! Haha

Spiderman for Robin. Doesn’t matter which iteration of each character.

Marvel needs more lightness and humor, plus someone who powers really don’t exist in that world.

DC doesn’t have multitalented bad guys. Who can go toe to toe with a variety of heroes.

Spider-Man is a kid dressed primarily in red in a need of a father figure. Obviously I would take him in as Robin anyway.