Two Truths and a Lie About Batgirls 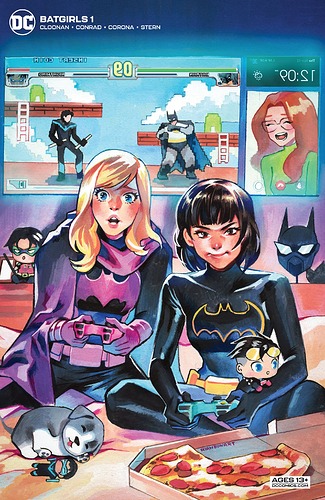 Batgirls #1 is here! The new series from Becky Cloonan, Michael W. Conrad and Jorge Corona takes the Batgirls to the other side of town for an unprecedented team-up. Barbara Gordon, Cassandra Cain and Stephanie Brown are starting over in a Gotham neighborhood known as the Hill. It’s not the nicest part of town—and in Gotham City, that’s definitely saying something—but the Batgirls are undaunted.

This book feels like one big Batgirl sleepover, so it’s only right that we play a slumber party game to celebrate! Let’s break down the first issue of this fun-filled, action-packed series by playing Two Truths and a Lie. Can you tell what’s true and what isn’t about Babs, Steph and Cass? Time to find out!

To find out the 2 truths and 1 lie, head over to DC Comics!

Have you checked out Batgirls #1 yet? Let us know in the comments!

A pretty cute way to break down the comic, I like it.

So, DCUI peeps- which one’s are truths and which one is the lie?

So, DCUI peeps- which one’s

Has squared off solo against R’as Al Ghul - untruth

You are all up!

I second the squared off solo against R’as Al Ghul vote!

Has squared off solo against R’as Al Ghul

I believe this is the lie.

Has squared off solo against R’as Al Ghul

That’s correct. My gurrrlll hasn’t taken on the Demon by herself… yet. But when the time comes I’m sure she’ll find a way to come out on top of the situation. Like she always does.