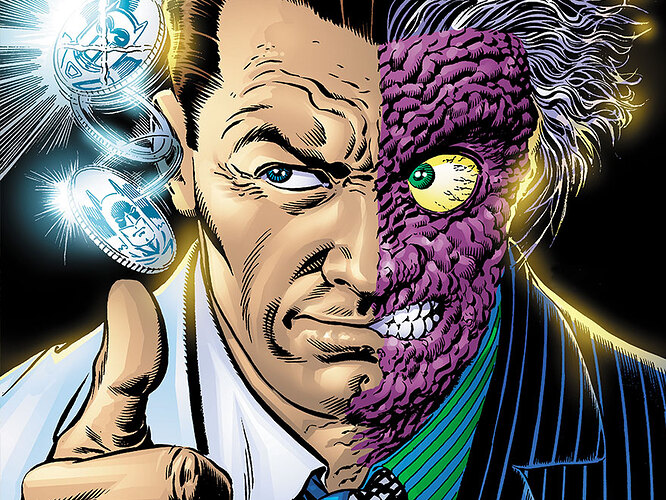 It’s Tuesday, February 22nd, 2022, which means we’d better watch out for Harvey Dent aka Two-Face. The guy has a weird thing about the number two, so this 2/22/22 business is irresistible to him. He’s probably going to rob the Second National Bank or kidnap a pair of twins or something at 2:22 p.m. In other words, everyone should be on high alert, and to help us prepare for any Two-Face shenanigans, we’ve put together this handy dossier on Batman’s double-dealing foe. Here are twenty-two facts about Two-Face…

1) When Two-Face first appeared in Detective Comics #66 , his real name was Harvey “Apollo” Kent. He kept the Kent surname for his next few appearances, until it was changed to Harvey Dent in 1948’s Batman #50 . The change was likely done to avoid confusion with a certain mild-mannered Metropolis reporter. This was later used as a plot point in Superman Family #211 when Earth-Two’s Lois Lane mistakenly believed that one of Harvey Kent’s enemies was targeting her husband.

3) Two-Face’s famous double-headed coin originally belonged to Boss Maroni. Harvey Dent used the coin as evidence during Maroni’s trial, which enraged the mobster, causing him to scar Dent. In some ways, this makes Two-Face’s coin partially responsible for his existence. Other versions of continuity present the coin as a possession of Dent’s father, with which he abused young Harvey.

For all 22 facts about Two-Face, head over to DC Comics!

What’s your favorite thing about Two-Face? Let us know in the comments!

Thank you for featuring Harvey Dent on the most appropriate day

This was fun! My favorite Two-Face story is probably Batman: The Long Halloween. I also liked him in the Gotham by Gaslight movie. I didn’t realize who voiced him in the Batman Lego Movie… I want to go watch it for the second time!

I see a reflection.