Trying to Find an Answer

So, here’s hoping you guys can clear something up for me that’s been bugging me ever since I first watched the episode 2 years ago- in Arrow 3x05, “The Secret Origin of Felicity Smoak”, there’s a shot where Felicity is at her front door and we can see her living room behind her, and she has a “The Adventures of Robin Hood” poster hung up on the wall. The thing is, I just know there’s a joke in there somewhere, and I’m mad that I can’t seem to figure out what it is.
Is the joke a) the fact that in the comics way back when, Oliver originally based his costume off of Errol Flynn’s Robin Hood, or b) the fact that, in Arrow especially, people have a tendency to derisively refer to the Green Arrow as Robin Hood?

I think his inspiration has always sort of been Robin Hood (just like Robin/Dick Grayson). So it may just be a subtle reference to that.

@the-shy-and-anxious-fangirl It could also be a homage to The Longbow Hunters miniseries. 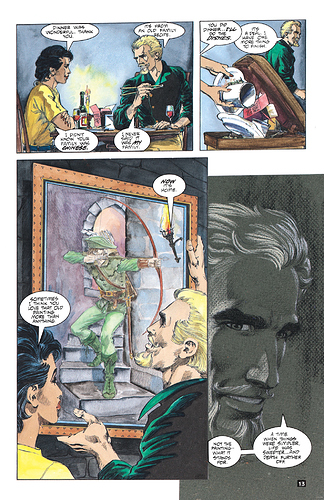 That’s a good point! I read The Longbow Hunters when they were doing that storyline in the show, but I totally didn’t catch that.

He’s been referred to as Robin Hood & his costume/character was modeled after Robin Hood also. Errol Flynn as u said was at least part of the inspiration from what I’ve gathered over the years.

I figured that’s probably what it was. Side note- I wonder if Felicity still has that poster. She’s moved residences a couple of times since, but we never saw that poster again after that episode.