Hiya folks! This week for Trivia Tuesday, we’re playing the game on Wednesday! That’s because I have a flight at the usual time, so Harley’s allowed me to defer trivia an extra day so we can all be together. Why? Because this week we’re celebrating the 30TH ANNIVERSARY OF THE DEBUT OF HARLEY QUINN! Dirty Thirty, baby! So let’s all join together to see who knows our babygirl of brigandry best!

Great son. I know you can still win.

I was gonna have to leave early on tuesday! now ill be able to stay the whole time

More victims for the clan.

I most likely won’t be able to attend tomorrow. So good luck to everyone else!

Oh it move to Wednesday, hey @HubCityQuestion, I’ve got a good Harley Quinn question to ask, but just in case I better not ask just in case you’re going to ask it.

Let me guess. The question is- “How did she raise such perfect pets?”

Nope sorry, that’s not it. Also I’m sorry to say that I won’t be able to make it to the trivia game.

I am here. If only typing were easier with paws instead of hands.

Q1. In Harley Quinn: Black and White and Red, Harley tells a bedtime story to Bud and Lou about founding which fast food chain? 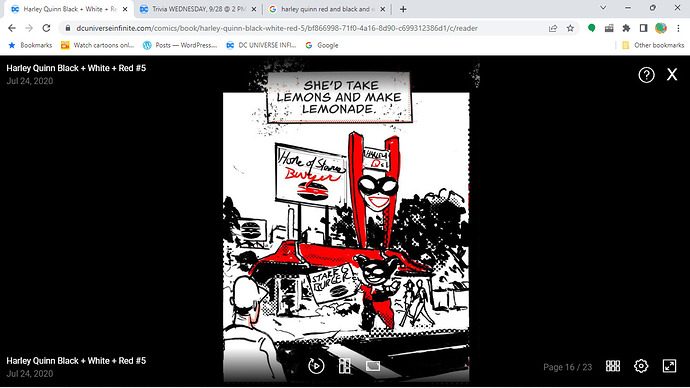 You’ve got the right issue, but the correct answer is “STARRO BURGER!”

I could not find a name anywhere.

Q2. What museum is located in the building Harley owns on Coney Island?