Tuesday Trivia_Banners-SocialCommunity Header Twitter (4)1125×450 274 KB
It’s time to go back to the very beginning! This week on Trivia Tuesday, we’re covering the stories and characters who started it all, in the Golden Age of DC Comics! Most comic historians place the beginning of the Silver Age as the publication of SHOWCASE #4, the debut of Barry Allen as The Flash, on July 5th, 1956. So every comic available on DC Universe up to that date is on the table! So rifle through your grandparents’ collection if you’ve got it, or just take a deep dive into the earliest end of our collection without hurting the resale value.

Trivia and a new Hawkman comic on one day. 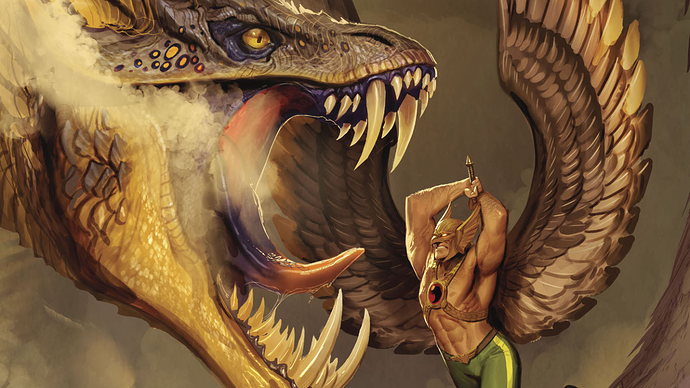 Hawkman #29 came out last week. It was pretty darn good!

I am currently on issue 18.

Back and ready to roll.

And oh yeah, that’s a good one! Hawkman definitely had the strongest YOTV tie-in of all the ongoing comics.

I have wondered where you were. Still alive most likely.

I skipped Injustice week because I haven’t finished reading the comic yet and didn’t want to get spoiled, then last week my sister had a last-minute work thing come up and needed me to watch my niece.

But I’m free and clear today. Well, except for keeping my own kid from eating his crayons, but I’m at a point where I can do that in my sleep.

if crayons arent for eating, why do they look so tasty?

That’s the one topic the Mr. Rogers film didn’t cover.

I forgot last week, but I remembered today! Hey everyone!

Tastes have changed, to be sure. I think there’s something charming about the early Action Comics and Plastic Man, though.

its not even about the art or the content! i just HATE the lettering with burning rage

I just reread Green Lantern’s first appearance. I never study for these. If I get the draw I might just mess with you by saying “surprise us”

I’d throw in the classic Captain Marvel too. Those CC Beck/Otto Binder era comics were wonderful.

Oh, I would too… you know, if we had them. Someday.