Trinity VS Dark Trinity: Who Wins?

I have asked myself this question for a while now, not sure if its in a comic so I am gonna ask you guys… Who would win?
The trinity (batman, Superman, Wonder Woman.) VS the dark trinity (Red hood, Artemis, Bizarro.) When I say win I mean what team would win in a fight? how would the fight go?
What would they use against each other? Let me know! 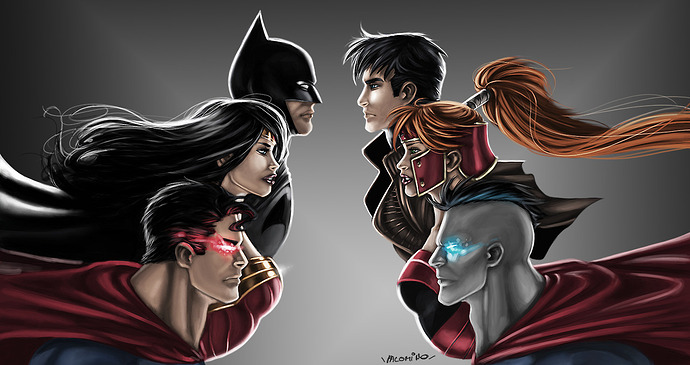 Are we talking about genius bizarro or regular?

I view the dark Trinity as Ultraman, Owlman, and Super Woman.

The trinity. they have More experince than the dark trinity.

independently the trinity have all beat these members on thier own

I… I really want to say Dark Trinity (for reasons we all know) but… are they even able to fight against and win a fight with the Trinity? I really hope so.

Thats a good question… you could pick either or. cause I really don’t know.

I always saw the dark trinity as Lex Luthor, Joker and Cheetah.

I think that the answer here has to be the OG Trinity. They simply just overpower the Dark Trinity and have fought (and WON) against far more powerful matchups. Granted, that might have something to do with the biases of the writers involved. After all, it was Stan Lee that always said that the winner of a fight in comics is entirely based on who the writer feels. However, based on what we’ve seen thus far in comics, the Trinity has the upper hand.

That said, I’d like to use this thread as an opportunity to maybe consider a way that a dark counter part to the Trinity would win if they were equally as powerful. That upperhand is simple: the moral mindset of the characters. A dark version of the Trinity could win because they take the same powers and intelligence of their opposers, but are stripped of all moral limitations. They no longer need to consider the responsibility of their actions. They are able to do insane and twisted things that the Trinity wouldn’t even consider because it’s not even in the perview of their moral code. A Dark Superman could weild his powers in a way that compassionate Clark Kent wouldn’t even think of doing in the first place.

Now, some people may counter that with, “Well, actually Bruce Banner is the most intelligent being ever made ever. He considers everything (even the bad) so you’re wrong. Checkmate.” But I think that’s a little bit of a cop-out and too OP for a character of that nature. I think that answer is a bit lazy and takes the fun out of these fights. Bruce is intelligent in the way that he is able to respond to situations and be quick on his feet. He’s incredible at improvising a fight and quickly understanding what his opponent is capable of. But understanding every move and thought the other person has requires Bruce to have time, preperation, and research that he wouldn’t necessarily have if we were to plop the teams into an arena to fight it out as they are.

So, yeah, TLDR; Trinity would win this matchup, but would probably struggle against more equally-powerful characters that are stripped of their moral limitations.

I want to say DT but T just is more coordinated and I think they’ve beaten them before.

As I understand it, green K enhances Bizarro’s intellect, not his physical strength. The one who gets that boost is Ultraman, the Superman of Earth-3. However, I would not put it past Batman to have some blue K laying around.

If there’s a “Dark Trinity,” I’m gonna say it’s Superboy-Prime, The Batman Who Laughs, and The Witching Hour Wonder Woman. Now THOSE three could handle the Trinity.

I have contigencies for all of them in my belt and socks.