Tribute To The Adventures Of Superman

Next year The Adventures Of Superman will be turning 70 years old!
I don’t think this show had been talk about as much like the other shows, so here I wanted to make this a tribute thread to the series,
The show ran from 1952-1958 with 104 episodes, what I find fascinating about the series was after 2 season, the series went from Black & White to colors beginning with season 3! Colors in the 50s is almost unheard of, I Love Lucy, The Honeymooners were film in Black and White. 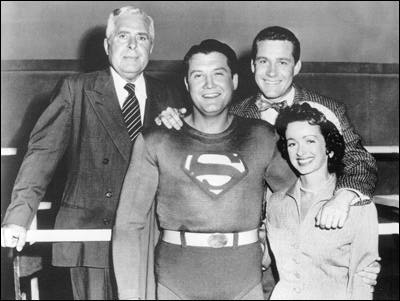 I think the show had a great cast, I think George Reeves did a good job as Superman and Clark Kent.
Jack Larson was my favorite actor to play Jimmy Olsen, in fact this show was so popular it help give Jimmy and Lois their own Comic Book!
Phyllis Coates played Lois Lane for one season, to bad she left the series, she wanted to do other things, she’s now the last living cast member.
Noel Neil would return to play Lois for a second time since the Superman serial. I think she really enjoy playing Lois.
John Hamilton, he play Perry White who famously say, “Great Ceasar Ghost!” Did you know the papers on his desk is actually his script? So he knows what to say.

The first time I ever saw Adventures of Superman was when the show was on Nick At Nite in the early 90s, I was suprise there was a old Superman show, and just love watching it.

With 104 episodes there’s so many great classic episodes like Flight To The North, The Stolen Costume, The Face & The voice and many more to mention.
I’ll be back soon with more stuff on The Adventures Of Superman, please feel free to leave a comment about the show.

One of our local stations reran The Adventures of Superman in the Seventies. I thoroughly enjoyed it and I have enjoyed it ever since. It really was a well done show, and George Reeves was a very good Superman.

In Batman '66 #73 which is the final comic, The Adventures Of Superman cast made a cameo including other DC characters… 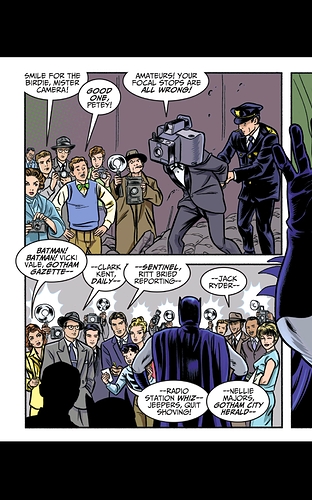 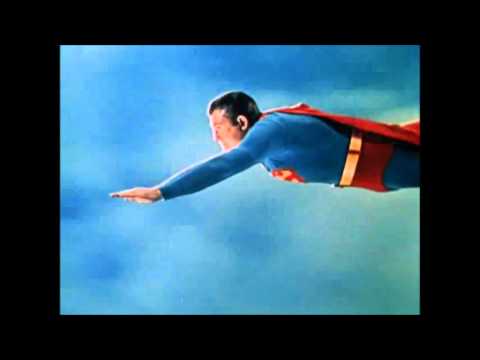 Did you know that the first time we ever see Superman fly is Superman meets The Mole men?
In Superman Serial we see Superman turn into a cartoon anytime he flys.
George Reeves is actually the first actor to fly on screen as Superman.

With the 70th anniversary on the horizon, I’m hoping that an HD remaster is on tap, if not already being worked on, for the show’s eventual HBO Max debut.

Anyhow, I love Adventures of Superman. It was a childhood favorite, back when reruns aired on Nick at Nite. I definitely wore a Superman t-shirt and a red towel (for my cape, natch) when I watched the show.

I used to own the DVD sets, while I currently watch the show on the Heroes and Icons channel. Its always a fun show to tune into.

I have the show on DVD. I first started watching it in syndication back in the 1970s. As a kid, I thought it wasn’t as good as it should be due to the lack of villains I could see in cartoons or the comics. Of course, later I found out they hadn’t been invented yet except for Lex. So I probably enjoy it more now than I did as a kid.

Ah, I remember it fondly watching as a kid.

George is my favorite Superman! These episodes are so adorable and such a great addition to the radio show at the time! I love that Noel and Jack were both in Superman Returns as Gertrude (the rich lady Lex swindles out of her money in the beginning) and the bar tender (when Jimmy and Clark get a drink before the plane scene). The entire cast were just lovely people. 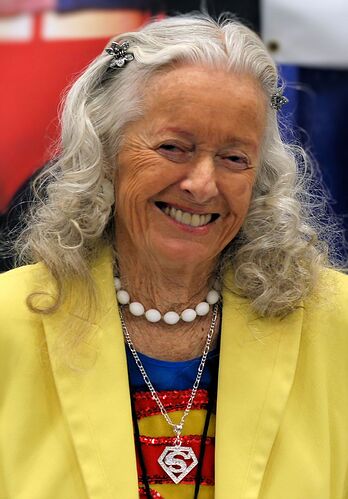 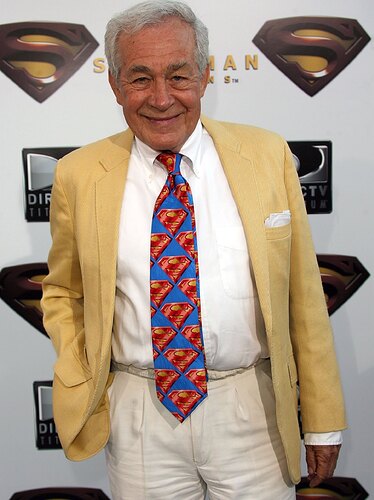 Don’t forget Noel Neill’s Superman: The Movie cameo on the train that Clark races past. I think that was my first introduction to her, as I saw STM before I got into Adventures of Superman.

One of the more swell things about Adventures of Superman is that it inspired the title for this comic series, after it was changed from it’s original title of “Superman” in the Post-Crisis landscape.

The Adventures of Superman is one of my all-time favorite Superman ongoings (certainly my favorite of the Triangle Era series) and that’s likely due to it always reminding me of George Reeves’ adventures as Earth’s greatest hero.

Don’t forget Noel Neill’s Superman: The Movie cameo on the train that Clark races past.

OMG that’s right I did forget about that!

I didn’t know that about the comic series that’s super cool!

I didn’t know that about the comic series that’s super cool!

I believe it was mentioned by Marv Wolfman in the introduction found in volume 2 of Superman: The Man of Steel, which collects the beginning of the '80s Superman relaunch, post-The Man of Steel mini-series.

As a kid in the early '90s, I always wondered how The Adventures of Superman was into the 400s when it was only a few years old at the time. Then I discovered the series that it used to be, and my little 8 year-old mind was blown wide open, much like Clark’s when he discovers his alien roots for the first time.

It was a childhood favorite, back when reruns aired on Nick at Nite.

That’s when I was introduced to the show too @Vroom. I love it! I still own the sets.

Thankyou everybody for sharing your comments.

Here’s a fun poll, Do you like the show in…

The black and white episodes because they were a bit more serious.

However, the addition of color made the series a trailblazer (as, generally speaking, Superman is wont to be) in TV history, and with color, came the very first opportunity to see Superman in his mighty red and blues in a production native to the small screen.

BTW, does anyone besides me think of this show when they see a box of Kellogg’s Corn Flakes?

Sure do, there’s a interesting story behind the scene for Corn Flakes commercial, Lois Lane wasn’t allow to be seen eating breakfast with Clark and Jimmy! 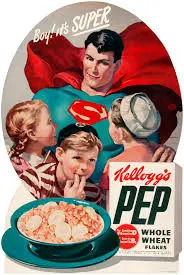 I always think of Kellogg’s when I think of The Adventures of Superman. I do believe they sponsored the radio show too!

Ya, its interesting, because the powers that be thought if she was there, it implied she was sleeping with Clark. But it was ok for Jimmy to be there first thing in the morning, LOL! 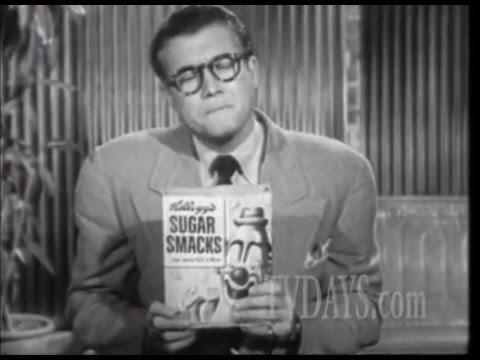 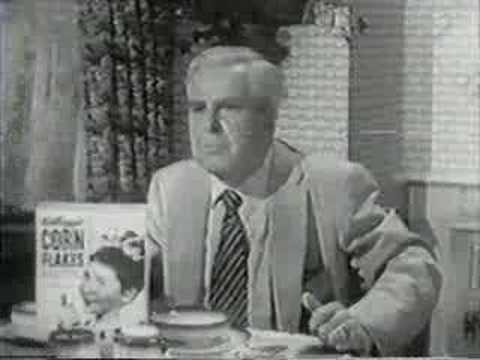 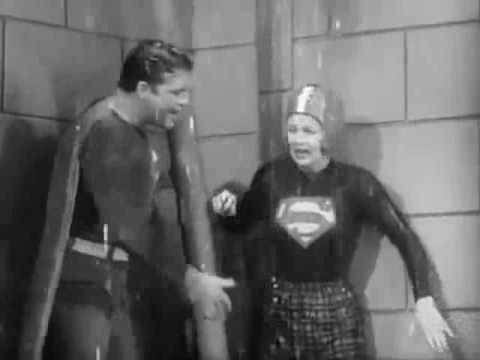 Here is the original 1957 credits where George Reeves is mentioned by the announcer. Sadly, Siegel and Shuster are not credited at the end. 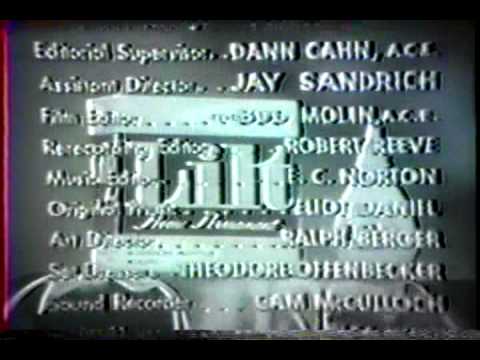 The costume looks a little odd because by now Superman is colorized and he’s wearing a red/ blue suit.

Here’s a photo of the two suits. 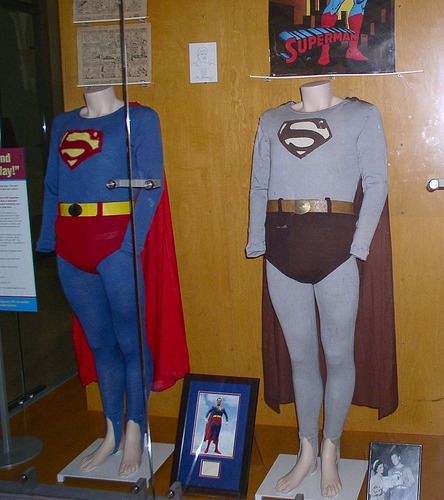