Toy And Comic Magazines: What Was Your Poison (Preference/Favorite)?

I don’t know if any print toy or comic news magazines exist today, but I got to feeling nostalgic earlier and was thinking about the ones from years past.

On the DC front, Tomart’s AFD had some swell Kenner Super Powers articles that were full of fascinating product reveals of items that sadly never saw the light of a retail shelf.

AFN had great DC coverage too, and in 2003 was one of the first outlets where I found reliable information (including photos) for Mattel’s then upcoming 6" scale, Four Horsemen sculpted Batman toyline.

ToyFare magazine may have been the best of the bunch however. I discovered it at Barnes and Noble during high school and I loved their news, highlights of lines past and present, interviews with brand managers and other members of production teams from various companies, their sense of humor and their Top 10 list of the top 10 most popular action figures each month.

Lee’s Action Figure News would go on to become a glorified Hot Wheels magazine with a wee bit of action figure news while Wizard Entertainment changed the formats of Wizard and ToyFare magazines and ended up eliminating a good amount of their charm. I don’t know the fates of Toy Collector or Tomart’s Action Figure Digest.

As for comic mags, I was really into Comics Scene as a kid and from my teens until it ceased publication, I was very into Wizard.

Do you have any favorite toy and/or comic magazines you’d like to wax poetic about? Feel free to do so =)

I LOVED ToyFare and subscribed for years. My sense of humor probably has a lot of Tom Root in it. Now I frequent The Fwoosh. It’s probably the closest thing to ToyFare around that I know of.

I’ve been to Fwoosh a few times over the years. I miss ToyFare. They should’ve released a digital mag when the print edition ended.

Didn’t even know these print magazines existed! However, I do visit Toyark frequently. Their news coverage is great, but the forum is skewed a bit towards Marvel. The Fwoosh has some good reviews, but their site feels a bit disorganized. Mentioned before it would be cool if we got a print publication from DCU showing what DC is working on, for collectibles, comics etc.

Oh, they exist my friend! You can probably buy oodles of these and other toy mags on eBay for pennies on the dollar.

Wizard was the only one I ever read. I was more into gaming mags back in the day.

My Mom surprised me with each issue of G.I. Joe vs. Transformers by Image Comics (2005) for me. I had never read toy comics before, but this series was well done (from what I remember). 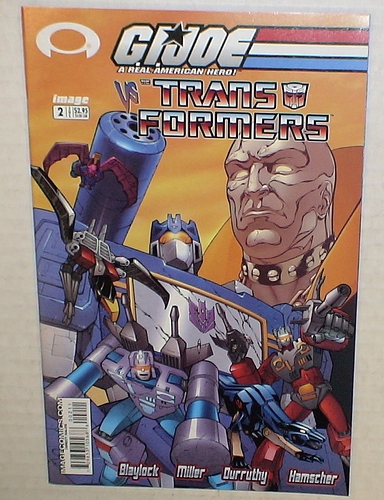 Wizard Magazine, without a doubt. I still have the X-Men 25th Anniversary Edition. My favorite sections were the custom figures and “Roll-call”, where they essentially would essentially fan-cast popular comics on movie projects we thought we’d never see.

…I’ve GOT to up my proof-reading game.

I forget the name of it, but ToyFare had a section at the bottom of their Top 10 list that was their pick for crappiest toy of the month. I loved when then unloaded on bad toys.

Two magazines popped into my head when I read the title of the thread:

Tomart’s AFD - I still have a bunch of these, including the Super Powers issue where they provided painfully glorious photos of the unproduced Darkseid’s Tower of Darkness playset. Hurts so good.

Toyfare - I have very warm feelings for this and the other publications from the same publisher, Wizard and InQuest. Twisted Toyfare Theatre always brought a smile to my face.

Twisted ToyFare Theater was hilarious! It was called Twisted Mego Theatre initially, wasn’t it? I seem to remember a name change occurring in the early 00’s.

I’m especially fond of a Christmas short where some small character (maybe Charlie Brown, I don’t remember for sure) goes to open the front door of a house and Mego Hulk kicks in it HARD with a “WHAMM” sound effect and the small character is smashed behind the door while Hulk says “Ha ho! Happy Christmas!” with an armful of presents.

I used to read Wizard religiously when I was a teenager. In the pre-internet age that was the bomb for learning about the goings on in the comic book world.

Me too. They blew a golden opportunity by not continuing the mag in digital form.

Tomarts AFD. Many years ago read in an issue (blurb really) that Cincinatti, OH TRUs had a test market for Kenner’s Alien figures. The same day the magazine came out I called a TRU in Cincinatti (I’m a few states away) and talked with a store manager at length about my dilemma. They had toys, our stores did not. I was able to pay for two complete sets of figures over the phone and have them shipped to me in a week. This was before ecommerce and cell phones. I wrote a letter to Tomart’s AFD about the whole experience and they actually published my letter in the next issue. Issue 5, 6, or 7 maybe on the inside cover. Again, good times.

My two mags were The Comics Journal and The Comic Reader. Loved the journal. In depth interviews with creators like Chris Claremont, John Byrne, Frank Miller, and so many others. Turned me on to Cerebus. The Reader had a check list so I wouldn’t miss my favorite comics. Cool art by the day’s best artists.

Another one that just hit me in a flashback. I can’t recall the name. Oversize toy mag, mostly on newsprint type paper. Just lots and lots of sellers selling toys. Must have been at least 12x14 (folded), maybe bigger. Had to be at least 100-200 pages. Would pick it up every month at B&N. Bought a lot of cool toys and found a lot of cool toy dealers in the mag. Anyone recall name?