I made a post like this in the “Other Media” section but this is a top 10 and just for comic costumes. My top 10 are…

Some of you must have favorite suits 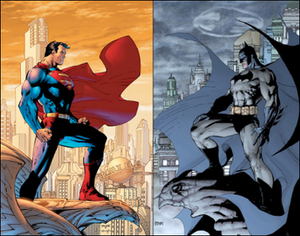 I forgot about that Superman. I love Jim Lee!

Dr. Fate: the helmet, the cape, the unique shade of blue… simple and effective.
Hal Jordan: the version with the green sections that extend onto the shoulders.
Ted Kord: perfect and Spider-Man-esque.
Jade: her original Infinity, Inc. costume.
Aquaman: Blue/camouflage costume (probably difficult to draw, but it’s still a beautiful design).
Tim Drake: 1st Robin costume (a perfect updating of Dick Grayson’s original look).
Cyborg: Vic’s original Perez design.
Halo: her original costume with the ribbons of color against the black (another costume that’s probably to draw, but looks great when drawn well).
Supergirl: her 80s/COIE costume with the headband, red shoulders and yellow accents.
Hawkman: a hawk helmet, a harness and a mace… that’s all he needs.

Black Orchid: it’s a strange design, but also visually compelling.
Captain Atom: his short lived costume that only appeared in The Law, a mini-series from the late-90s that no one seems to remember.
Tarantula: the All-Star Squadron character.
Various Legionnaires: Mon-El, Lightning Lad, Sensor Girl, etc.

All the Earth 2 costumes are pretty rad. Makes me wish it got a longer run.

Flash’s was a bit iffy. He looked like a Power Ranger.

Ha yeah he did