Welcome to the second week of the November selection of #titans-together. This goes from Sunday, November 15 to Saturday November 21.

The winner of the first poll was the original Wonder Girl - Donna Troy! She is my all-time favorite character, so what a beautiful way to start the club’s reading for me. Now there are numerous stories or issues that could have been read for her or even any future club selections, so know that these selections are not considered “the best” or “the worst” of these characters and by far they do not represent an exhaustive list for the character. In fact, some of these characters may eventually be brought back into the mix in the future for a second outing. Some of them have that many important stories.

Last week, we saw what Marv Wolfman originally created for Donna’s origin. Due to the Crisis though, Donna’s origin allegedly had to be revised. This was because the plan for Wonder Woman made it necessary. The character was being changed to have only just arrived to man’s land, which meant she could not have saved Donna from a burning build. This changed Donna’s origin drastically. We will be reading the issues that show that revised history this week. These are issues 50-54 of “The New Titans” (1984).

JOIN IN NEXT WEEK FOR MORE DONNA TROY READING GOODNESS!!!

If you have any questions, concerns, or etc. about the club, the reading, or whatever reach out to @CassTheStreet for all your #titans-together related goodness.

Oh, here’s where it all becomes a mess (and keeps getting worse). If only Legends (or some equivalent debut for Wonder Woman) could’ve been set 5 years before the current post-Crisis timeline, we might have been spared this pointless backstory revision.

I think Gar sums it up, for me 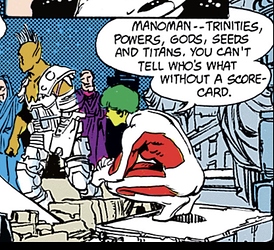 image1099×1000 343 KB
This origin is more problematic and less satisfying for me than the first. Did Diana also get false memories? What did she think when she first arrives, people start calling her WW, and she realizes there is already a ‘wonder girl’ wearing the same insignia? Did it all become clear when Phoebe made sparkly eye contact?
The original outfit is inspired by the flag and her abilities are coincidentally the same as WW’s, maybe because Amazon share Titan bloodlines. Sure that’s fine; but what about Donna’s gear? Why the lariat and bracelets? Especially the bracelets since they signify a specific moment in Amazon history. If WW had not left paradise island yet, then what inspired those elements of Donna’s costume. And who did Donna live with while she was attending high school, if the Amazon weren’t her guardians?
I also find it difficult to believe that Bruce Wayne would ever let Dick and the rest start a team with someone who had zero record of existing. He must have researched everyone extensively beforehand… he’s Batman. Maybe everyone’s memory was altered

All the confusion aside, I actually like this series more than the first set. I like them both; but this series was action packed, and the bright colors were mesmerizing. I love seeing the team battle together; and there were some really heartfelt moments between teammates, like the exchange between Gar and Vic after the battle on Synriannaq. That’s what I am here for, regardless of everyone’s origin. Plus it’s always great to be reminded just how hardcore Kory is. 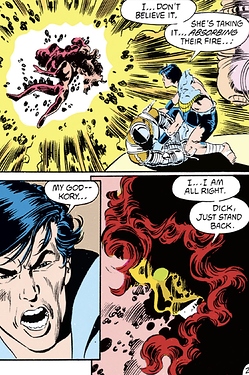