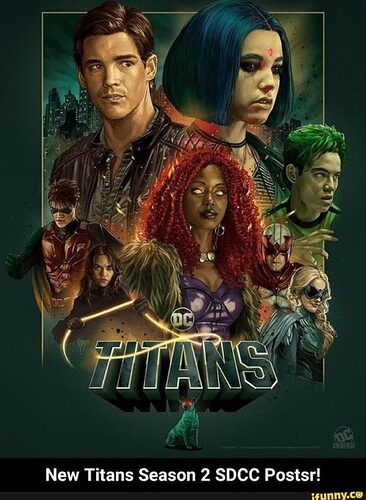 TITANS ARE BACK — and headed to Gotham City August 12th! Are you hyped for the trailer? Let us know your favorite moments (and any theories!) in the comments below!

YES! I have been waiting for this for forever! I am also really happy Jason didn’t just say “oh well im red hood now” without getting the special joker treatment. So excited and I have high hopes!

They’re raising the bar this season

Didn’t expect to see Jason crowbarred. Thought they may have gone a different route but hey I’m all for. But a do sense a time jump happening for some reason.

This is already looking like it’s going to be the best season visually. The move to HBOMax definitely helped this series a lot. That said, I’m still iffy on the show. The past two seasons have been really hard to get through from a narrative/writing perspective. And, despite my LOVE for the character, the sudden jump of Jason turning into Red Hood this season has me a bit worried that they’re still rushing through stuff. I’m hoping they’ve figured it out though, and I’m willing to give it a few episodes to prove me wrong.

They’re raising the bar this season

Didn’t expect to see Jason crowbarred. Thought they may have gone a different route but hey I’m all for. But a do sense a time jump happening for some reason.

Could be time jump. Could be vision/dream type thing. (Could be not Jason?!)

Could be not Jason

This would definitely be a twist

Or a future seed.

I was surprised by this trailer. I’ll be glad to see the Titans again!

WOW! I hope I actually like this season for a change. The Red Hood costume looks great, along with the Starfire one as well. They really need to lean into Bruce’s emotion on Jason’s death, otherwise the Tim Drake will brobably put a sour taste in my mouth.

What is it boy?

Say, you are right Krypto. That is a pretty cool trailer.

Oh I’m so excited! I have been wondering how he would become Red Hood.

It will premiere 2 days after Stargirl!

they coulda fired the entire writing team since they don’t know ■■■■ about the characters, who they are, how they interact, why they’re so important, and what makes them a team in the first place and bought better writers with that extra budget that actually know this team of characters but nope.

I have a pet theory after watching the first few episodes of the show (that’s all I watched) that it’s a stealth parody/satire of grimdark takes on superheroes but that’s probably not really the case.