From the shadow of the bat, a new hero arrives to join season 3 of Titans. Please welcome…Jay Lycurgo as Tim Drake! 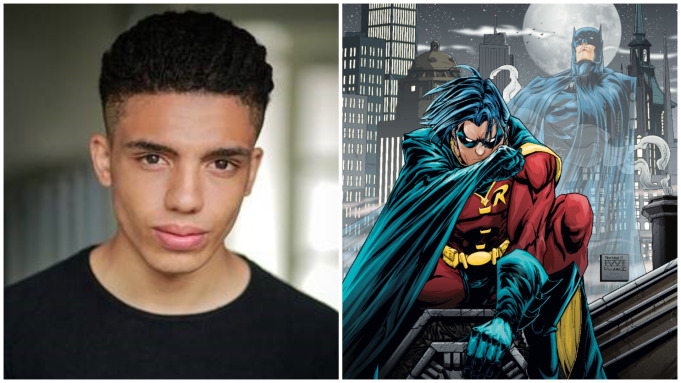 “Drake is described as a streetwise kid who’s managed to grow up on the toughest streets without losing his indelible belief in heroism. His easy-going demeanor is backed up by a near-genius mind, a natural detective with a perception of detail far beyond his years. Fans of the “Batman” comics will recall that Drake served with Batman as the third Robin.”

Read the full scoop on Variety.com!

Are you getting more hyped than ever for Titans Season 3? Let us know in the comments below!

Drake is described as a streetwise kid who’s managed to grow up on the toughest streets without losing his indelible belief in heroism.

So Jason Todd 2.0 with more detective skills? I don’t know this actor so I can’t say anything about the casting, but the character description isn’t what I was hoping for.

As much as I love Tim and the bats, I wish the show wouldn’t put such a big focus on the gotham vigilantes, all the other titans have great supporting casts that we’ve seen less of.

That said, I hope he does a good job!

If it is any consolation Lego Batman: Family Matters did the reverse by using Tim and calling him “Damian.” Other than that has Tim ever been adapted? It seems they just name Jason “Tim” over and over.

They don’t want me to be great

I’m not familiar with Tim Drake’s backstory but this reminds me of Ryan Wilder’s story that first came about with the casting calls for the new Batwoman. A hero with a heart from the streets…GIMME STATIC SHOCK PLZ!!!

@casasstrophe DC: Why are you spelling Dick and Damian with a T?
@NanoDeVice I never saw Static as the street guy, mainly because I always thought his dad was the best character.

Also, having “Tim” grow up on though streets while also casting a black actor feels iffy to me? Are black kids not allowed to be bougie rich kids from fancy neighbourhoods?

Maybe it’s just my rough memories as a kid. With his origins in the show relating to gang activities that he got mixed in with and then being a hero fighting some of them who got their powers from that incident. I might mis-remember or conflated things in my memory that he was a street guy idk.

This was exactly my thought when I saw this announcement.

I don’t know the actor but I hope it is at least a good character for him to play. I like Tim a lot, but I’m just happy he is getting used for more than just a no-line role. (I’m looking at you: Young Justice: Outsiders.) Even if this isn’t a comic accurate Tim; I’m just excited to see him on the small screen.

And yeah, Titans is going a big Bat-family route, but that’s because they want to keep viewers interested with characters mainstream people know. Babs and Tim make better headlines than Blue Beatle, Kid Devil and Kid Flash. Also, less powers/metas mean a better budget for the powers the team already has.

If I remember right a bully messed with him at school. A rival bully backed him up and insisted Virgil join his group of bullies at a gang fight where the Big Bang happenned. Other than that he was not a street guy.

ahhhh okay. That part is completely blank in my mind. Thanks for the reminder.

Happy for the actor! I saw he was in “I May Destroy You” which is a phenomenal show. I’m sure he’ll do a great job as an actor. I think he could play a great Tim, but I am once again really disappointed in the writers of the show. As people have pointed out, the description doesn’t feel even remotely connected with Tim Drake’s typical character. I’m fine with movies and shows doing their own thing. The character doesn’t need to be a 1 to 1 recreation, but nothing about what we’ve been told so far feels connected to Tim’s character. Maybe there are a few runs where he’s a street kid, but it doesn’t reflect his overall character.

Once again, I’m super happy for Jay and I’m 100% willing to give him a chance. None of my criticisms are on him or his casting as I’d be fine with him playing a regular Tim Drake character. But the Titans writers continue to show clear lack of understanding of good character writing and I’m just really disappointed in how they’ve built this show.

Tim was a rich kid and a Batman fanboy. He was upset that Bruce was getting all grimdark after Jason’s death, and he tried to pressure Dick into donning the green pixie boots again. When Nightwing wasn’t having it, Tim threw on the old costume himself and completed the self-insert fan fiction that is “A Lonely Place of Dying.”

Then Alan Grant was having none of it and killed off his mom.

Yeah, at least acting-wise there hasn’t been anyone in the cast I’ve disliked. They’re all pretty solid to great imo. So no qualms about the actor here either just the way the writing loses focus on what started as the core four for Season 1. The way Ryan Potter worded a certain thing on Twitter makes me lose any optimism that Gar would get any strong material for the new season.

Now that’s a unique back story and nice tie-in to the continuity with Jason’s death I didn’t expect. Thanks for the info!!

Disappointing. Nothing like the comic counterpart other than name. This is not how you get me to watch the show producers.

I just saw the commercial and knew I was not interested. Hope it makes the viewers happy like Stargirl makes me happy.

Have to agree with what everyone is saying here. I will give it a shot but why take his backstory and change it so much from the source material.

From the shadow of the bat, a new hero arrives to join season 3 of Titans. Please welcome…Jay Lycurgo as Tim Drake!

“Drake is described as a streetwise kid who’s managed to grow up on the toughest streets without losing his indelible belief in heroism. His easy-going demeanor is backed up by a near-genius mind, a natural detective with a perception of detail far beyond his years. Fans of the “Batman” comics will recall that Drake served with Batman as the third Robin.”

Read the full scoop on Variety.com!

Are you getting more hyped than ever for Titans Season 3? Let us know in the comments below!

And as Variety noted…

Lycurgo is next set to appear in a supporting role in Matt Reeves’ upcoming feature “The Batman,” though if he will be playing Drake in the film as well remains unclear.

But yeah, I’ve never watched Titans, so I’ll start with season 3 and Timmy and see how it goes.