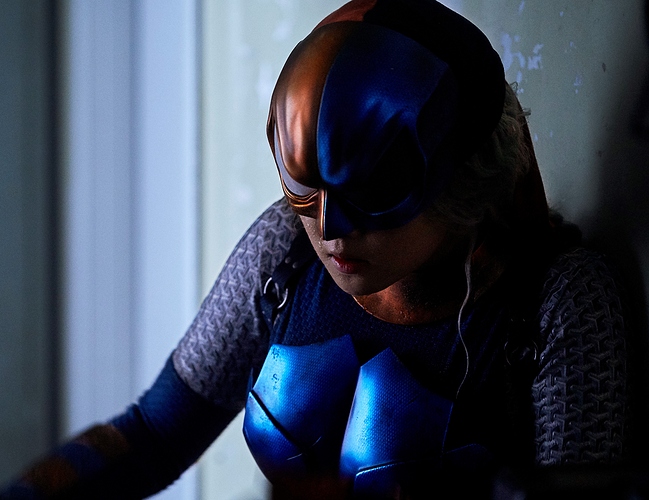 We finally got a little more backstory on Rose and got the big Ravager reveal! Although, with a freshly broken heart and an emotionally manipulative father, who knows who Rose will be fighting in next week’s finale.

And speaking of broken hearts, what is Hawk doing? Arena fighting, relapse, and selling his suit to a kid? Sounds like Hank needs a good reality check.

And, while we still are on Nightwing watch, we got a little teaser of Dick viewing the suit for the first time! WOOT! We’re almost there, folks!

If you haven’t watched episode 12 yet, make sure you do then come back here and let us know what you thought!

Just wow… this is probably one of my favorite episodes in the whole series. Honestly I loved practically every minute of it. It had a great mix of serious, emotional and comedic moments.
The choice of music when Hank fought in the cage at the beginning was hilarious

and the music when Deathstroke was training with his daughter was BADASS. The writing was really strong with this episode imo and really revved up towards the finale in a great way.

How you gonna write a scene that is both hilarious and sad with this dude.

Also the fact that Hank was so messed up on drugs that he forgot he sold his suit was a great reveal.

Hank better pay him back or make him a side-kick! 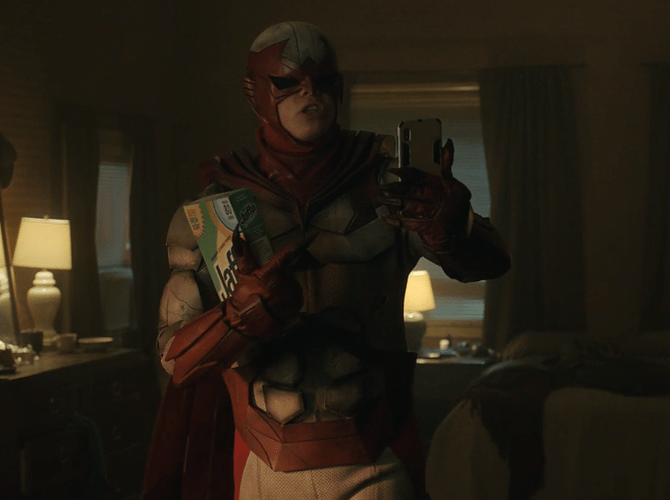 The other Titans should take a page from Jericho’s book when a friend lies to them. 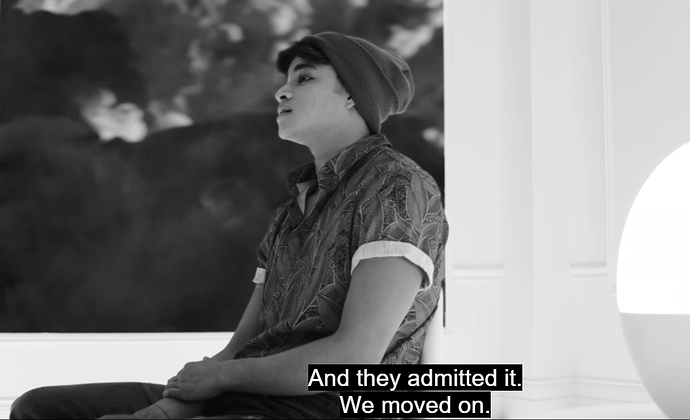 Me realizing there’s only 1 episode left and we’ll only get 1 episode with Nightwing : 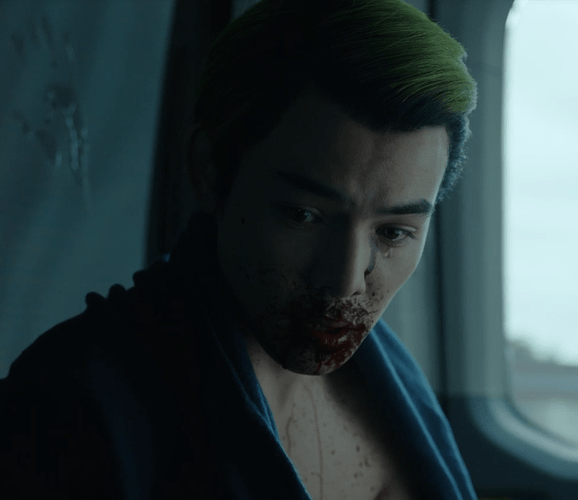 Excellent story, good pacing, great plot twists. Should be no problem with most of the faithful

Gar’s officially joined the criminal ranks of Kory, Dick and Conner. I’m very curious how/if they’ll resolve the issue of them all being wanted criminals. BTW Dick’s totally fired if he hasn’t been already lol

This was awesome!! And ugh! Clutch my heart all throughout

this finale is going to be amazing!!!

Okay. That was a mix of very good and kinda bad, like so much of the Titans. Reactions in no particular order:

Another lame episode, an entire season of the Titans losing yay!

The Titans timeline is completely messed up. When did the Titans break up?

@rdoliver30 Titans broke up 5 years ago after Jericho died.

When did Slade go into hiding?

Why did everyone think he was dead?

@rdoliver30 I assumed the part of everyone thinking Deathstroke was dead because Dick lied to them about that since in Season 2 Episode 3 after seeing the footage of Deathstroke Donna looked specifically at Dick (and Dick just kept pretending that he thought he was dead too since he’s a pathological liar). So either it was another lie from Dick or Deathstroke completely disappeared for about 3 years in between him meeting Rose and the current time-line so it was assumed/rumored that Slade was dead. 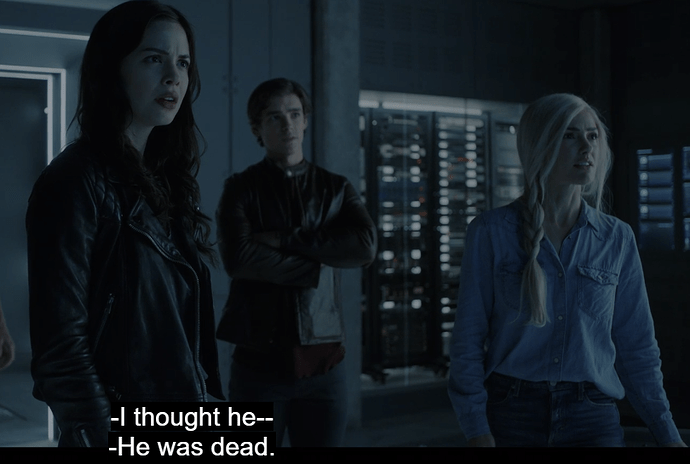 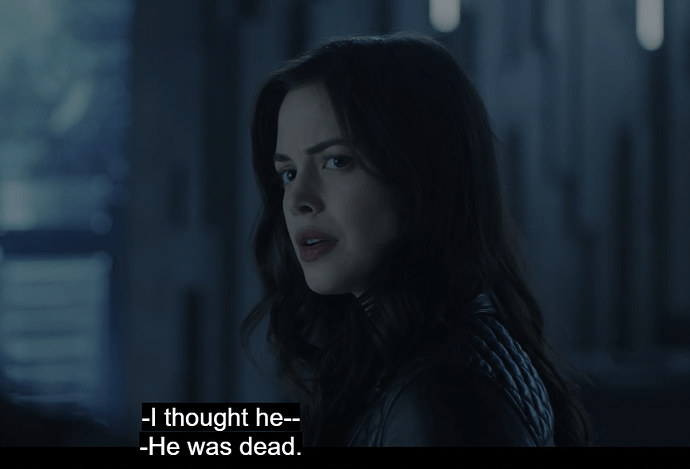 Reposting from another thread:

Rachel’s indifference upon hearing that Gar was in trouble was interesting.

Nice tease with the Nightwing suit. It reminded me of the scene in the Incredibles when they got their new suits.

Jason acts like he doesn’t care, but he will show up.

Conner is a wildcard here, as we’ve seen nothing about him so far since his capture.

Cadmus using Gar in public seemed a bit pointless, as he can no longer be used as a weapon against the Titans, unless they are using him as a lure in a trap, but they could have done that without weaponizing him.

Anyway, we’ll see how this all ties in together next week. Maybe it’ll be a double length episode.

Jason acts like he doesn’t care, but he will show up.

I hope Jason shows up. I need a BinGo! 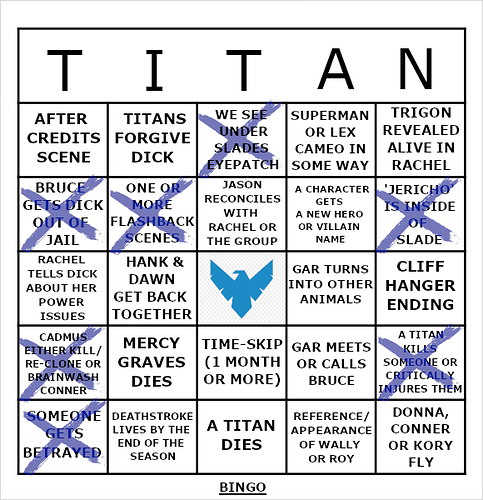 Conner is a wildcard here, as we’ve seen nothing about him so far since his capture.

I kinda wonder how they’ll cure him and Gar being brainwashed. Most likely Rachel using her powers like how she ‘healed’ Kory last season. They got some kind of psychological control over them considering the brain surgery stuff we saw with Gar so I don’t think just talking to him will shut that off. We’ll see what happens.

Cadmus using Gar in public seemed a bit pointless, as he can no longer be used as a weapon against the Titans

How would that prevent Cadmus from using Gar as a weapon against the Titans? Cadmus is evil but not dumb enough to keep testing Gar’s powers against their own staff so they were testing their control more just on random people. None of the Titans even knew Dick was in jail this whole time so they probably don’t know what happened at that coffee shop with everything going on right now. But yeah we’ll just see what exactly this ‘Phase 2’ they mentioned is about.

Anyway, we’ll see how this all ties in together next week. Maybe it’ll be a double length episode.

Can we have a season where Gar’s not the punching bag? Rose’s costume looks so cool. Please have Jason Todd for next season. And that reveal of who actually makes Batman’s and Robin’s suit was interesting especially how they were tick with him burning the suit., can’t wait to finally see Nightwing.

How would that prevent Cadmus from using Gar as a weapon against the Titans?

I would think that Gar’s greatest value to Cadmus was as a sleeper agent. The Titans now know that he’s been weaponized and is under Cadmus’ control. so he won’t catch them off guard. Sure. he’s still dangerous, but I think Kori, Donna or Rachel could easily take him down. For the non supers it would harder, but I think they could do it too.

Anyway, as we saw at the end of the episode, once Mercy learned that Donna and Dawn knew the truth, she had to speed up her schedule. But by going public with Gar. didn’t she already blow project Beast Boy’s cover?

Anyway, I don’t see how this can all be tied in together in just 45 minutes, which is why I think we could get an extended finale. Or maybe not, maybe we’ll get stuck with multiple cliff hangers and have to wait another year, just to get a quickie cleanup, like we did with the Raven vs. Trigon episode.

Mercy learned that Donna and Dawn knew the truth, she had to speed up her schedule. But by going public with Gar. didn’t she already blow project Beast Boy’s cover?

@TheForceIsStrongWithThisOne Oh damn, yeah. I somehow remembered the guy mention Cadmus did surgery to Conner and Gar but forgot he told that to Kory and Dawn when they interrogated him lol my bad.

When Rose date’s name was Todd like Jason’s last name. I C Wut U DiD ThErE

I liked this episode a lot! I liked getting all these different story lines as they slowly converge. Poor Gar and poor Hank, though. Rachel not caring about Gar threw me a little, because of how close they were last season. But I guess with the death dreams she’s been having it makes sense she would be that concerned for Dick. Seeing Jericho actually in Slade’s mind was great too. Hopefully they find a way to get him out.

I hope Jason comes back as Robin. I feel like that is way too quick a transition to Red Hood. (Though, that mean we would get Tim faster, but still…) I am liking Curran Walters acting a lot. I’m not usually a big Jason Todd fan, but I’ve been rooting for him all season.

Can we have a season where Gar’s not the punching bag?

Everyone got to meet Bruce/Batman before he did even though he wanted to since Season 1 lol
Most of Gar’s plot line this season is getting screwed someway or another.

But yeah hopefully he gets something more next season.