Titans Is Apparently More Successful Than We Thought 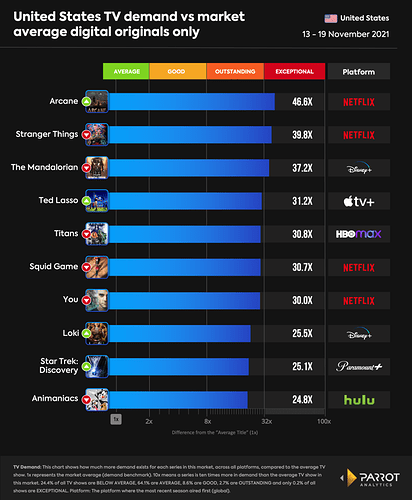 According to this graph from Parrot Analytics, Titans is around the fifth most watched digital original show in the U.S. I believe this is after the season ended. Now I take this chart with a grain of salt, but how great for Titans!

I do not watch a single show on this list. I really dislike made for streaming TV, so that makes sense.

I watch 5 shows on the list. I find that I still enjoy network tv and don’t think that Streaming=Premium like so many others do.

The Mandalorian is no surprise. I would not think Loki would make that list. I liked the show, but would not have thought it would have had that wide of an appeal.

I personally am not a huge fan of Titans, but hopefully that’s a good sign that we’ll be seeing more DC TV content with bigger budgets on HBO Max in the future.

I think Loki was the most successful Disney+ Marvel show. I didn’t watch it, but from what I heard it was the most like the movies.

It took me 23 years of modern Comic Book Content but now I can finally say that I’m comfortable leaving certain things to their fans exclusively. I paid for DCU so i forced myself to watch TITANS since i was paying for it, but on HBO Max I can stick with Doom Patrol, White Lotus, and feel good for my brother who very much likes it! It took time and saturation for me to be comfortable skipping Titans, CW shows, Hawkeye and soon to be more.

I think in some ways it’s a testament to Superhero Media that they now tell stories as varied as the comics and as a viewer i finally don’t have to support all of them. I have no fear they are going away, and i can finally admit that I wouldn’t read a Loki comic so I won’t watch the show

In a way I feel the same. It’s nice to be into comics and comic media, but that also not mean that you like ALL COMIC MEDIA

Side Note: Titans was one of the most watched Global Netflix shows. So the DC TV Content is doing a lot better than people think.

Pretty good mix of nerdiness there. One entry each for League of Legends, Star Wars, DC, Marvel, and Star Trek.