This is NOT meant to get under anyone’s skin. I really can’t stress that enough.

I really can’t be the only one that sees problems with this live-action adaptation. So far every person liking it comes across as being pretty naive, and inexperienced to think the show is a solid watch.

To those that like it, let me explain why it’s flawed. In a non-boring manner.

-We Live in a World Post-The Last of Us
What this means is that stories of the Parent/Guardian protecting/mentoring the “special” child has been done to death. Not that the story in itself is bad but after so many mediums (I. e. The Road, Telltale’s The Walking Dead, The Last of Us, Logan, New 52 Batman and Robin, God of War 2018, etc) we’re on the verge of genre fatigue, and future adaptations including Titans is prone to cliché and predictability. It kills the immersion and leaves the viewer disappointed when their predictions become accurate in a scene.

-The Origin Story Fatigue
No one who is a fan asks for an origin story. It’s slow and in this show you’re simply waiting for things to happen. We want amazing tales that compliments meta humans, their powers and attributes. This show so far is coming off bland, and sluggish and predictable.

-Live Action is Difficult
Acting in real life is tough I get it. Especially when in today’s digital age where a lot is transparent and it’s so blatantly obvious that it’s just people in costumes playing make believe, the acting in this show is inconsistent in execution. That inconsistency kills the viewer’s immersion. The swearing comes off as disingenuous, the attempts of a tender moment/chemistry are so flat and obvious they’re an eye roll if not wince inducing. (Seriously, use other synonyms for “dark”, “light” and “pain”. It’s that bad) And the action scenes are sometimes rough and claustrophobic I end up lost as to what even happened.

I don’t like how they made Raven into a whiny damsel either. The show is meant for a Mature Audience when really it isn’t. CG is too obvious. It’s supposed to be a more “grounded and real” take on the Titans but that’s not what anyone really was asking for either. I invest myself in comic book mythologies for how otherworldly they are, not for them to be relatable to our bland and mundane lives.

I suppose because of that the animation department has gotten my support all the way. Animation is a lot less limiting than what can be done in real life. In fact I said before that Constantine City of Demons gets it right for being a hard R rated film. I re-watched it and it was excellent.

I’m not going to stop watching the live action show because my sorry fan self still holds on to what little hope there is. But I seriously can’t be the only one who finds this adaptation bad.

Really what I want is high budget DC Animated films. Perhaps they are no Akira, Ghost in the Shell, or Spirited Away, but most certainly not bad.

You’re right is not good…its awesome!

Are you speaking Chinese?

Your entitled to your opinion, but when you open it by saying that “comes across as being pretty naive, and inexperienced to think the show is a solid watch”, it makes you come off as a little arrogant, and somewhat elitist.

I kinda agree… I enjoy parts of it so far, but overall this show could of been sooo much more.

Yeah like today this guy commented about “intelectual value” over “the entertainment purpose” and I was like “little arrogant talking about cinema of cult and crap”. Enjoy things come on! It has good direction, good cinematography, soundtrack is somehow well used, the story respect a lot the classic interpretation of the characters, cgi sometimes is not as expected ( but we all like star wars, and know how to live with that). Overall the best dc show in years alongside with Black Lightning (oof yeah). Sorry Arrowverse Fans (i also enjoy the rest). If you dont like it I get it. But if it is just stubbornness and the need to criticize everything to show how we know about this tecnicity and the intelectual value bs it is better to rethink the opinions.

Calling people inexperienced based on liking. My god can I meet in person?

I got as far as you calling the people who like this show naive and stopped. Get your dictionary out and look up the word. Don’t bother to come back and post in response. I won’t read it either. LoL

Wow, the first half of your whining is basicalky due to preference.

Fatigue? Sounds like you need more hobbies than watching tv shows and playing video games. There are shows and games without the same plots, but you dont seem to watch any of those.

Your own choices are giving you fatigue.

I dont watch TWD anymore, I do read Batman, I havent played any God of War games since 1 and 2. So, maybe it hasnt hit me yet.

Btw, Raven is not a whiny damsel, she simply hasz zero explanation why tghe things happening to her are happening. She will conttol her powers, I bet after learning what she is and how they work.

Besides the cursing & Starfire, Raven & Robin its cool

Yea the cursing is lame

I’m enjoying the show but am done defending it because it comes off as excuses now and it’s a back and forth thing every day in multiple threads. It’s all rinse and repeat with different words on sentences

It’s fine not to like the show but trying to convince others of your opinions and putting them down and vice verse is low.

So I’m done debating. I want to have fun in the community with fellow DC fans than some civil war about certain topics

Okay, certainly I wasn’t trying to change anyone’s mind. If anything I was looking for a justification why a good sum of the community are even ok with it. Or for that matter, the portion of the community that receives the show well would also garner me in.

Like I said, I’m still going to have to watch the rest of the season. It’s not like I have choice anyway; no other adaptations of the Titans have been announced to my knowledge.

I just think the show looks silly, the tone is mostly bland and quirky, and the only way it captivates me is to “gamble-watch”. That is, “is the next episode going to be good or bad? Will it redeem itself or not?” That’s not how it works, man… <:-(

I mean could you guys envision these characters in this show flying, gliding and going all out DBZ style? I want to be wrong but I’m calling it right now that it’s going to look really, really silly. Mark my words. I want to be on your side bad, guys. Cause right now I don’t want to be right.

Honestly I Love Hawk & Dove more than the rest of the cast & characters… if they don’t become regulars on Titans, I’d enjoy seeing them in their own show. 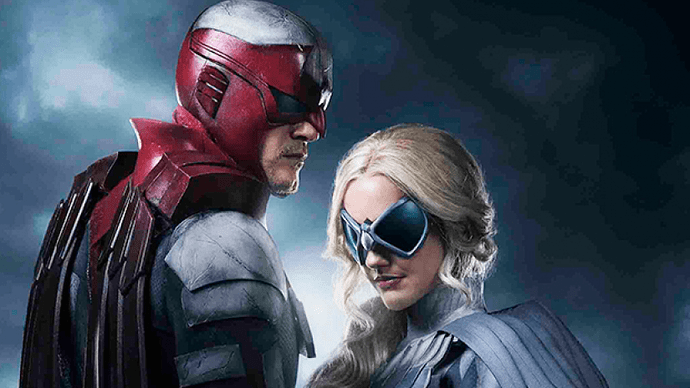