Just watched Wonder Woman Bloodlines and it ends on a perfect note to build an original animated series. Superman and Batman have had multiple animated outings going back 50 years+. It’s time for the last member of the trinity to have her time to shine. Even Aquaman and Shazam have had their time with their own cartoon series. The show can combine Veronica Cale, Cheetah, Giganta with WW’s more mythical stories and adversaries. She’s been around since 42. Maybe in time for her 80th. What does everyone think?

A Wonder Woman animated series is long overdue. I’d be in.

Wonder woman should get her own series. It’s kinda sad it has not been done already.

I’d enjoy one for sure.

Yup. Beyond high time for Wonder Woman to get her very own animated series.

Maybe that can be the newest DCU exclusive.

I thought the same thing as soon as I finished the movie. People have said her rogues gallery isn’t large enough. They showed more then most times & there’s still a lot they didn’t use. Angle Man, Blue Snowman etc. I could see it as an animated show the second it ended.

I have wanted more Wonder Woman on TV since the Lynda Carter series ended. I will NEVER get enough Wonder Woman and really wish DC would stop ignoring her. You go look at trick or treat or Easter buckets, plenty of Batman and Superman, hardly ever a Wonder Woman. I am still desperate for a Wonder Woman 77 animated film (or 85). I would love a live action TV series for WW (simply due to the possibility of so many stories in so little a space of time as opposed to a movie every 3 or so years). However, nothing would work better for WW than an animated series. Her rogue gallery is pretty much ignored because they have never gotten to shine like Batman, The Flash, or Spider-Man have. Plus, with the mythical elements and dealing with the gods and goddesses, WW would be better suited to animation for budgetary reasons to make it right. When will DC finally figure out the demand is high for an animated series?

Sooo many Wonder Woman villains that could be pulled in.
Baroness the original arch foe.
Ares and his many children who serve his evil will.
The plethora of villains in Villainy Inc from Cheetah to Doctor Cyber
The false hero White Magician
The dangerous Gundra the Valkyrie
The diabolical Angle man
The twisted and malevolent Doctor Psycho
Circe in all her incredible glory.
From the goofy villains such as Human Fireworks and Baron De Boar to the more serious foes such as Devastation and Queen Clea.

Theres so much mileage and plethora of directions one could go with fashioning a Wonder Woman cartoon. From tales of mythology and magic to space empire and science gone wrong.

I don’t know if any of you read Webtoons but there is a Greek Mythology comic on there called Lore Olympus that is super good and has a huge fanbase. I think they’re turning it into an animated or live Netflix show. Anyway, if that can be super popular they could totally do something deep into

mythos and really dive into the Amazon’s history with the gods. I for one would love to somehow learn more about her people and their reasons for isolating themselves and then dealing with the consequences of that. It would help me understand just how difficult it is for her to leave and her mother too. Then, when she’s out there kicking bad guy butt we could see her using the things she was taught as a kid so it’s not just punch punch punch bad guy in jail, you know? Wow that’s a paragraph of well thought-out gibberish!

I would check out Wonder Woman TAS, but absolutely not if it based on the DCAMU. In my opinion Bloodlines is the most boring and forgettable DC movie ever (and I have seen at least 60 DC movies). Everything they did can be easily replicated in a 2 part episode.

Sure plot issues can be fixed, but other problems cannot. The only emotion I ever heard out of Rosario Dawson was mild anger (and the ice cream obsession and it bothers me seeing superheroes eat so much junk food in a serious setting), and I consider every single other Wonder Woman performance to be better than hers. The animation style of the DCAMU is dull, so I really do not want more of it.

If they make it just start over. I would think coming right before or after Wonder Woman 3 is the best time to release it. The Bruce Timm Batman and Superman animated shows that led to the Justice League were great. I had often wondered why Wonder Woman, Hawkgirl, Green Lantern and Flash never had series of their own. I honestly think Wonder Woman TAS is an idea whose time has come. And I would like to see a tweak to her origin. Does she have to leave home only because she met Steve Rogers or could she leave due to premonitions of bad things in the world of man? 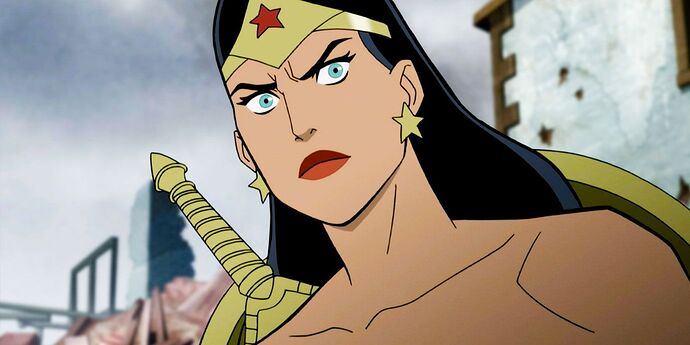 Buth Lukic pitched a series, and some of his ideas will be in the upcoming JSA movie.