Tim Drake has a new name and costume and his name is Drake after a bird. I love this name because Red Robin was way to similar to Robin and Red Hood.The new costume is weird since it is brown but it’s a decent suit that is growing on me. From a boy who found out who Batman is to a boy who now leads Young Justice in the comics.In the show Young Justice they don’t have this suit I’m hoping in season 4 he will have this suit and name.Now let’s hope Tim comes to Titans by season 4 or 5. 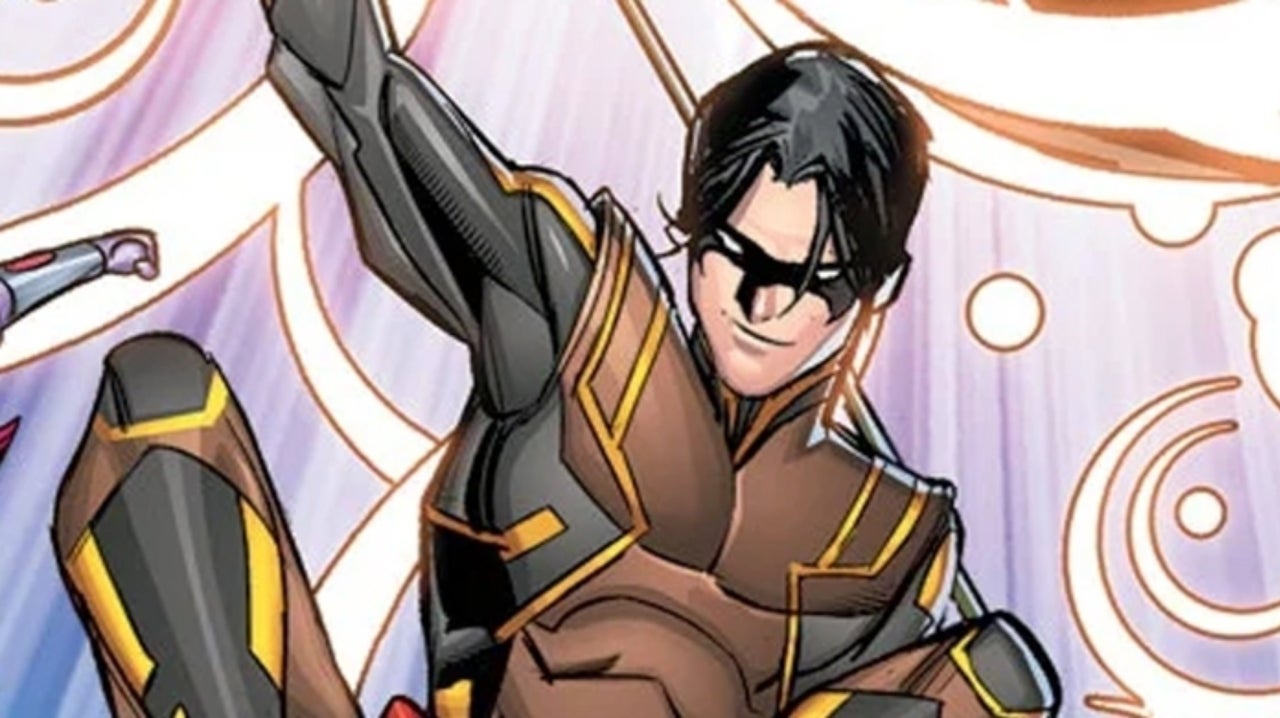 His costume looks like something a character wouldn’t put on before entering the internet back in the early-nineties when writers really had no idea what the internet was.

Some of you older readers know what I mean.

I can’t really argue with that analogy, BatWatch.

I touched on this in my Batman Day vlog last Saturday, but I’ll summarize it here: At first, I thought the name was really stupid. But I tried to give it more thought, to “give it a chance”, so to speak–and I didn’t really think it was less stupid. He’s named after a duck. If this YJ title was more comedically slanted, and there was some joke to this, that’d be one thing. But I don’t think Bendis is writing a comedy.

The costume looks kind of drab, but I don’t hate it. It just doesn’t feel like it works for Tim. But then, when has that ever stopped DC since 2011?

That costume is still world’s better than condom man. And it’s not like a duck is much less dignified than a fast food chain

To be fair, it is hard to think of a good name for Tim. I actually dig large parts of the pre-52 RR costume though the name is dumb. I recall seeing some fan art for him keeping the sides of the cowl while leaving the top of his hair in place, and I think that might be the best version of Tim’s costume I’ve seen. With the name, I think the desire to tie him to a bird is stupid. It’s a legacy title that doesn’t fit Tim. The point of graduating from Robin is to come up with your own identity, yet writers keep tying him to the old one making him redundant. Some completely random name like Interloper would be better than Drake.

I don’t think I was ever a huge fan of the “Red Robin” name, but it never really bothered me that much because it was just a color added to his previous, usurped identity. Perhaps that made it more acceptable, and easier to grow on me. The costume was a hand-me-down from two other guys (aside from its Kingdom Come origins), so it does leave the question of is whether or not this is his own identity. I forget if he came up with Red Robin himself, to kind of spite Damien, or if came with the suit. But then you have Jason, who took an old identity used by criminals, including the one that killed him. He made it his own, for better or worse (it made sense when he was trying to control crime, using lethal methods) and I certainly think Tim made RR his own.

I think a commitment to keeping a bird theme may be more to keep him tied to the Robin identity, to a degree, but as incidental as it is, it could be worked into something of an arc for Tim, if a writer was so inclined (and capable). But as I’ve said, Redbird would’ve perfect, especially if this is it’s own universe separate from the post-Flashpoint canon.

I’d prefer Redbird to any of the names he’s been given though I’m not particularly a fan. My problems with Red Robin are many:

As far as where Tim got the idea for Red Robin, one of his arch rivals, The General, started dressing up as Red Robin and challenging Tim. I don’t recall if this was to ruin his reputation or what. Regardless, Tim defeated The General in his second to last adventure in his original series and took the costume. Then, Battle for the Cowl happened and I never actually read that one, but from what I gather, Dick became Batman and gave the mantle or Robin to Damian in hopes he’d learn at Dick’s feet and stop murdering people and perhaps stop being so much of a dick, and Tim was all like, “What the what?” and then was like, “Guess I’ll just use this ID I already got laying around at home.” Thus Red Robin was born.

It’s been awhile, but it seems to me that Tim might have been using the criminal association with Red Robin to get into the underworld a bit. I can’t recall how much of this is true and how much of it is my own personal mental fan fiction that I started writing when the New 52 kicked Tim and I in the balls. It seems like there was some hint towards that in the Red Robin series that never got properly explored.

If I could have pitched something starting off from where Red Robin left off, I’d like to see Tim in like a super villain spy hunter role. I’d like to see him research, discover, infiltrate, and dismantle various villainous organizations using different identities to get the job done. He’d still have a main ID, but he’d use others to research and infiltrate. To me, this seems to play up Tim’s strengths and would differentiate him from his brethren.

Honestly, after Bruce disappeared and Dick became Batman (with Damian as his Robin) the most logical thing for Tim to do was become the new Nightwing.

I was never up to date on Bat Family stuff and didn’t even know who Damian was until getting back into comics a few years ago. I think Tim Drake should have stayed Robin and they should’ve named Damian a different code name. But that’s just my nostalgia talking. They already had a Red Hood, they didn’t need a Red Robin. I don’t like the codename Drake.

I think Tim is the embodiment of Robin, I too would have liked him to stay as such and Damian can be something else (several combinations of Bat and synonyms of Jerk come to mind).

In regards to Drake… it’s WAY lazy, and completely counter to the point of a codname: to protect your identity. Hey, did you hear!? Bruce Wayne is the masked vigilante Wayne!!!

Even Mighty Drake would have been better… hehe

At least this new name doesn’t make me think about hamburgers and the ad jingle “Red robin! Yummm!”

On a hunch, I did a little Google searching, and while Tim became Robin in 1990 around the time of the speculator boom. Perhaps, if their first foray into the medium included him as Batman’s sidekick, that’s part of why some people associate Tim with the Robin identity more than others? Or feel it “fits” him best?

Robin was my first real comic to collect, and I have no problem with Tim having a new code name. In fact, I’d prefer it. It just needs to be good, or heck, I’d settle for okay at this point.

The codename isn’t the problem. It’s that damn costume.

@Batwing52 Yeah, I don’t hate it, but it isn’t particularly striking. It’d work for a character that’s only seen every so often, or maybe as a standard uniform for the henchmen of a bigger bad, but for someone like Tim? Needs work.
The name, I think, could be summarized the same. Maybe if Tim was a spy like Grayson was a while back, that be one thing. Maybe if it was used by a completely new character, and the only connection to Tim is that his friends tease him about it in private. But–well, I’ve gotten into how weird it is.

Yeah, I’m not okay with the name either. The name sucks.

Look! Up in the sky! It’s a bird! It’s a plane! It’s… Clarkman! Who on Earth could this mysterious stranger from another planet be?