Thoughts On Zack Snyder's Opinion With Batman and Superman

Here is a recent quote from Zack Snyder (Superman v Batman director) what do you guys think about it.

Someone says to me: Batman killed a guy. I’m like, 'F***, really? Wake the fck up’," he said. "Once you’ve lost your virginity to this fing movie and then you come and say to me something about like ‘my superhero wouldn’t do that.’ I’m like ‘Are you serious?’ I’m like down the fucking road on that."
"It’s a cool point of view to be like 'my heroes are still innocent. My heroes didn’t fing lie to America. My heroes didn’t embezzle money from their corporations. My heroes didn’t commit any atrocities.’ That’s cool. But you’re living in a f**ing dream world

Michael Keaton’s Batman is the first Batman I knew and he killed bad guys.

I can’t stand this man, why won’t he go away

Yes… movie versions of Batman have killed in the past… Keaton put a bomb down the pants of a henchman didn’t he? Bale choosing not to save Ra’s al Ghul can be seen as crossing a line. But Snyder’s attitude about it is what really puts me off. The “you’re living in a f***ing dream world”… well yeah, that’s what comic books and movies are.

Hopefully this will quite some screams for the “snyder cut.” He made a good contributions to the DCEU (mainly casting, and I still dig Man of Steel), but he should not have been the one directing those movies and this shows how disconnected he was from the characters. His vision failed, and I just want him to move on so I can never think about them again.

For the heavily darker tone he wanted to take the DCEU, I can see where he’s coming from. The problem with this mindset at least was that Watchmen did best with more invested fans. Same with his contributions to the DCEU films. The lighter takes on things like WW and Aquaman seem to be more popular as they can still have serious plots and imagery, without sacrificing comic like mis-en-scene and sequences on screen for fans looking to enjoy the flicks as opposed to enjoying the references and dark takes on the characters. I mean, just let the boy scout be a boy scout.

The Tumblr user “aronightwing” wrote a well reasoned post about this in defense of what Snyder is saying: http://aronightwing.tumblr.com/post/183695952092/the-criticisms-of-zack-snyders-comments-are-so
The following are her words, not mine, but I agree with what she said:

The criticisms of Zack Snyder’s comments are so disingenuous. For a start, they’re based on willful misinterpretations of what he was saying. He did not say that superheroes shouldn’t have morals or that “superheroes killing is realistic” or whatever else bull***t people are twisting his words into. He said that the world is complicated, that portraying that is a better way to demonstrate what matters about superheroes than a world in which there are no moral or psychological challenges, and that if you can’t stop complaining about him and how he did that, you’re being an overgrown baby that needs to grow up. If you didn’t like the movie, but could come up with a better reason for that than “this isn’t how it should be”, or you didn’t like the movie, but didn’t feel the need to cry about it for years, or you didn’t like the movie because you recognized it just wasn’t your cup of tea? Congrats! He wasn’t talking about you.

Secondly, other directors have said things that are much more “arrogant” when people don’t like their work. They still don’t get attacked as much as he does. He didn’t complain about reviewers or get into fights on Twitter. He just kept his head down, minded his own business, and made movies. And when he’s asked questions, he answers them! He didn’t say anyone is obligated to like his movies. He didn’t say anyone criticizing them is wrong or stupid. So how exactly is it arrogant to say that he had a vision that differed from what other people wanted to see and was no more wrong about that then those other people were right?

Thirdly, he patiently and thoughtfully explained his thought processes for years when people were saying horrible things about him. A number of people refused to listen, to the point where I can only assume they were plugging their ears and singing. Those people have never listened, held consistently hypocritical views about him and his work, and been d**ks for no reason whatsoever. After that? Snyder is not even remotely obligated to monitor his tone to placate them because they get upset at the slightest criticism.

I just wish other comic creators like Bryan Hitch and numerous were nicer to him. They’re attacking the man, not his opinion and his fans.

We shouldn’t be gatekeeping and dividing people but here they are, doing just that and putting down a colleague who would never do that to them

And, by the way, something seems oddly out of place and ironic about all this talk of lighter takes on things being the way to go and darker takes on characters being a problem, when the flagship series here on DC Universe is Titans

Sounds familiar. This is Superman’s response to that.

I guess Snyder is Manchester Black in this situation. 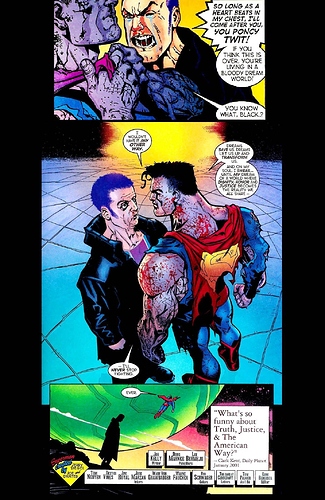 I will never understand why people are so bent out of shape with Batman in BvS. It was SO much more shocking and horrible to see Michael Keaton’s Batman murdering people and yet no one complains about that.

One of the main plot points of BvS is that Batman is wrong! He is wrong for going down the dark path he has since Robin died, wrong for becoming so cruel and for killing and wrong about Superman. Superman inspired him and by the end of the movie, he sees that he was wrong and finds his inner hero again.

It makes SO much more sense than Keaton’s Batman just killing people left and right. This is a Batman who is broken after 20 years and finds himself again to once again become a true hero. BvS is actually uplifting to me.

Batman is a symbol of standing up for principles and justice in a bitter, ugly world.

@BatJamags It seems like you are putting forward a Batman that is idealized in your head, and that doesn’t necessarily reflect the diversity with which his principles or lack thereof has been written in the comics. Batman is many different, incongruous things.

I grant that in his first few appearances, Batman did kill. Since then, though, almost never has Batman been written as a killer (except in Final Crisis, but one exception does not create diversity). Why? Because he’s dedicated to his principles. He doesn’t compromise, because he believes that’s the line between hero and villain. Some people, both writers and audience, think he goes too far anyway. Fine. That’s valid. But Batman is committed to that principle, even at his most ruthless. How many great Batman stories that deal with the very heart of the character focus on the value he places on human life? The Dark Knight Returns, A Killing Joke, A Death in the Family, Knightfall, Hush (not the whole thing but certainly the part with the Joker), and Under the Red Hood, to name a highly abbreviated selection.

Snyder doesn’t care; his Batman is a murderer and you’re “living in a f***ing dream world” if you think that’s a bad choice. How many important Batman stories do you have to not care about before you just don’t care about Batman?

The internet and social media wasn’t around back when…

66 Batman came out and while the main heroes wore spandex and suits, Catwoman was oversexualized in a skin tight leather costume. There would had been a sexist issue, objectifying women by prioritizing a suit and image of a female? Let’s be honest here.

89 Batman killing people would had generated a similar response to BvS haters and Titans haters alike “Why is everyone gothic is Burton’s films? Why is Gotham so dark, wth, why is Penguins blood black ink?”

Point is, the very few who do complain are going to make anything look bigger than what is and the hidden motives could be something like “I hate Affleck, he’s a horrid actor so, yeah… Imma hate it already just because of that” having that “I’m angry so I’ll tear down this film any way I can.” Proceeding to make alternate accounts and bug the people who worked on a film - as if that would change the film’s existence in any way.

In that way, I understand where Snyder is coming from. Keep in mind that Directors, writers, etc get trolled everyday due to people’s snide opinions, politics, whatever the case. I couldn’t imagine how much he’s had to hear to get him to this point. Even moreso as he doesn’t generally have a bad rep with handling fans or communication.

I agree that Batman doesn’t kill and stands for justice, he has a code but this isn’t any different from Superman being manipulated and turning into a killer in Injustice and Wonder Woman killing people left and right as well. Yet, Injustice was recieved well because it’s a video game and BvS wasn’t because it’s a movie. Another prime example of how the fanbase can have ridiculous double standards.

Yeah, I can’t blame the guy for giving such a response.

It clearly shows why he should never have been trusted with those characters. Though the movies made money; they vastly under preformed due to they’re being rejected by many fans.

Yeah but same could be said about Burton, Nolan and Schumacher. It’s come to my attention that no matter what directors do, people will just never be happy or satisfied. Is BvS truly a bad movie? That’s subjective, just as beauty is subjective and the community us pretty split on that matter but eh, at least Snyder respected the characters and integrity a heck of alot more than Nolan did with The Dark Knight and The Dark Knight Rises, an utter disgrace to what holds a character true to themselves.

Perhaps the biggest disgrace though is how people defend something just because they like it, refusing to admit the truth of the matter (Nolan Bat-fans) and then they’ll pick apart everything else. Bare in mind, I’m not picking on people who like Nolan’s films, just using that as an example since some people think Nolan’s films are somehow better than others. No, every live action Batman film has it’s faults, we have a far better chance at getting the perfect cartoon Batman film.

Batman did kill in the very early comics but it’s become such a huge part of his character to not kill, its his code and that’s what makes joker as a villain work so well and it seem Snyder is just throwing that all away to make a edgy film. But at the same time BvS takes place after the a death in the family story ark where Bruce has lost his way and Superman is trying to keep him from going to far.

I have no problem with Batman killing. In his early appearances in comics, he’s killed. Batman killing in Batman V. Superman serves a purpose in the story. It’s hinted that he went downhill after Joker killed Robin. As long as it serves a purpose, I have no problem. Batman V Superman is my favorite movie in the DC Extended Universe because it was very dark and gritty.

My take: Snyder is a bad director and his Rotten Tomatoes scores prove it. Some people like his stuff and that’s fine. His biggest problem seems to be that he is willfully unable to take criticism, and that’s likely why his Rotten Tomato scores have been consistently bad; he can’t absorb legitimate complaints of his method.