Recently picked up The Joker 80th Anniversary, which features the very brief origin of Punchline. I need to see more from character to really get a handle on her, but as of right now… I don’t think she fits into the Batman universe at least to me. She seems like a modern “scene kid” rather than a capable villain. I’d interested in others thoughts though. 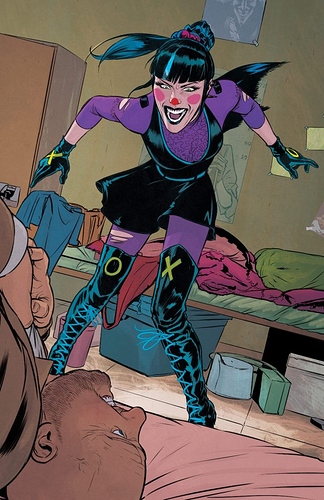 I felt pretty much the same. I appreciate that we now at least know some actual things about her and her personality, but it doesn’t exactly make for the most compelling character. I’m still open to learning more about her and hopefully getting to embrace her at least a little in the future, but that’s gonna require real time and care dedicated to developing her character in an interesting way. Otherwise, the way that things are going, the overhype of trying to make her the next Harley is just gonna kill her and risk sending her into obscurity

I just hope the big build up doesn’t end up damaging her reception too much. I think part of that is just due to the virus’s effect on delaying comics, which obviously nobody could plan for. I feel like I’ve been hearing “Punchline is coming!” for six months or so now.

I liked her backstory. But I am nervous about everyone comparing her to Harley. I think that’s gonna destroy her character pretty fast. Let Punchline be her own thing. (As much of her own as Joker’s ‘partner’ can be) She’s a new character, she just needs time to grow. I really did like her line about how “You told us we could be anything we wanted to be”. It was a nice twist to something I had never really thought about before.

I liked her first ‘full’ appearance in Batman #92 though. I really liked how she and Harley interacted and Harley’s reaction to her.

Not really a fan. I see where they’re going with the Betty and Veronica for the joker. However, her origin is really shallow. She’s a spoiled college kid who’s upset with established order so she decides that’s a good reason to start killing g people. At least Harley Quinn’s origin had depth.

Haven’t read any of her yet I’ve only heard some stuff but I feel she can end up being a great addition to the bat rouges.

She’ll have to get through the Harley comparisons as Jokers new second in command and that will be her first challenge bi to feel it came done.

I think of it as a Robin situation. When Grayson was first replaced with Todd as Robin he had to go through those hurdles of being compared to him. He did and became a Robin in his own(as did the ones after him). So I think it can be done. It’ll just take a bit of time.

I hadn’t thought about it as Robin situation, that makes look a little more kindly on her. I will continue to read about her and I’d love to see her grow in something memorable. I’m just a bit disappointed by what I’ve seen so far.

I think the Betty/Veronica angle is interesting. But why for the Joker? Seems like a strange choice.

The best thing about Punchline is that she has filled a vacancy in Joker’s supporting cast that was originally created by Harley Quinn. What this means is: she never has to go back. Now that her position has been filled, Harley is free to pursue permanent growth without backsliding into The Joker’s arms.

That is 100% my favorite part of Punchline, right now. Harley is such a great character that can do so much more when she isn’t tethered to Joker.

Where I stand now is Harley will always be my Comic Book Girlfriend Love Goddess of Crazy, and I’m SUPER having fun with her journey into Heroism, but honestly, she was kind of an accident. She wasn’t really meant to be significant and the only reason she became so is because the fans liked her,

Punchline, on the other hand, is systematically being introduced as an intentional character who they plan to be reoccurring.

From what I’ve seen so far in Hell Arisen and the previews from Joker War I have gotten my hands on, she seems to be a little more capable and in control of herself. Where Harley is just plain Crazy, Punchline seems more Sociopathic.

I’ll bookmark this and come back once I read this week’s books, but I think she’s going to be awesome! (Plus real nice to look at!)

A lot of good things have been said in this thread and I’m glad you created it @mccaggers91!

Now that I have had a chance to get up to date with Punchline I’m SUPER excited to have a chance to discuss her with other people!

I really think we need to not look at her as, or expect her to be “the next Harley.” She’s a totally different character coming from a totally different place. She hasn’t established herself as Joker’s girlfriend…she’s Joker’s “Partner.” More like a Lex/Mercy relationship rather than a Clark/Lois one.

And as far as her being a “spoiled college kid” goes…I can write an essay, if not an entire book about the world young people endure these days, but this isn’t a platform for that so I’ll stay on point.

I see an angry young person.

I see a young person who is so fed up with all the old people feeding her a bunch of bull s*it that she’s ready to see it all burn. And it excites me!

Harley was manipulated. Harley was taken advantage of and brainwashed into thinking that she needed Joker, but Punchline sought out Joker on her own because she just wants to watch everything BURN! That’s what makes her different; what makes her Joker’s partner rather than his girlfriend: Punchline herself is an agent of chaos!

Thanks for your post! Having read Batman #92, its definitely a more Lex/Mercy relationship. It’s very striking when you see her interact with Harley. I hope she plays a big part in upcoming arcs. And if she’s popular, I hope she gets a graphic novel about her origin. Something more nunanced.

I heard a rumor of DC doing a Death of Harley Quinn. They’re ending the Harley Quinn series on issue 75, apparently Punchline & Harley will fight in that issue. Punchline might be the one who kills Harley.

Where did you hear that?

From a couple friends who collect comics.

Any chance you know where they heard it from? That would be a really big development and I just feel like we need to be weary about speculating on it if it’s not coming from a reputable source

No, I didn’t ask. As soon as I hear it’s a rumor, I don’t bother asking where they heard it. To me, regardless who says it, if it’s a rumor, I take it with a grain of salt. The closer to the release it’ll either increase talk or nothing. As far as Harley Quinn ending at 75, that’s confirmed from Frank Cho, one of the cover artists.

I do know the book is ending, so I suppose more than usual is possible. And I agree in taking things like this w/ at least a grain of salt, but I can at least put some stock in rumors from reliable sites/sources as opposed to ones like this that just seem to come out of nowhere

I think Punchline has some potential. I won’t compare her to Harley, mainly because it’s unfair to compare a character with a history going back- what, almost 30 years?- to somebody who just showed up in the past few months. I think if they’re thoughtful and careful with the character, Punchline could have a real bright future.