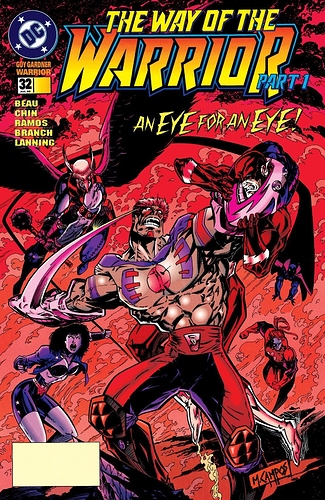 I landed on Beau’s Guy Gardner: Warrior run while playing with my random comic generator system, and I thought it was well worth discussing.

I don’t have the deepest knowledge on the Green Lantern area of DC, but I enjoy Guy Gardner as a lovable douche and a foil for other characters. I also knew this series had a bad reputation, and I’ve now confirmed that this bad reputation is well earned.

The Warrior era starts in the aftermath of Emerald Twilight, where Hal Jordan went nuts and killed off the Green Lantern Corps. This resulted in Guy losing his power ring, and he decided he needed new powers. Long story short, he just so happened to have alien DNA that gave him powers after drinking from a special liquid found in some rainforest, so suddenly he has super strength and shape changing abilities which allow him to manifest weapons at will.

Sadly, that’s where the plot seems to begin and end. Every other story is either, “Guy fights baddie because he’s a good guy,” or, “Guy is a rage machine and attacks a good guy.” I know you can boil many stories down this way, but there are usually deeper levels, and here, there’s nothing. It’s Hulk smash with no frills. There’s also an ongoing story about Guy not knowing how to use his powers and some alien invasion coming, but every story seems to end in Guy learning to use his powers only to still be out of control in the next story, and the evil aliens have no motives. Frankly, I just don’t care about their invasion.

The art is a real problem. Hulk smash can be fun with a sufficiently talented artist, but I’m not a fan of any of the interior artists. It’s often ugly and hard to read especially. The coloring is a major issue. There are many panels where they used color so haphazardly that the foreground and background images cannot be distinguished because they were similarly colored in a few simple uniform intermingled tones.

I guess I can mention Dementor. He’s a recurring villain. I don’t know what his deal is or what his powers are, so he’s real exciting.

Oh, also, there’s a lot of, “Girls just want to have sex with Guy,” moments which made me think of a writer fantasizing about what they wish their life was like and living vicariously through his creation. Surprisingly, I don’t think Guy ever actually takes up any of these offers.

The whole thing is a mess.

How did Guy lose his powers and rejoin the Corps?

I’d been meaning to take a look at it, since I think I’ve heard some people say this was better than it sounds.

It now sounds like it was not, in fact, better than it sounds.

Certainly not in my view. The first arc starts off alright since it was started by Chuck Dixon who is a comic god as far as I’m concerned, but though it lays out a confrontation with Hal as it’s premise, Beau takes over by the end, and the conclusion is…Hal wins. Guy is knocked unconscious. That’s about it. It’s like he has no idea the fight is only there in service of the emotional battle. Nothing has any meaning.

I also don’t really know what his powers do. I can see them, but they aren’t properly explained. At one point he grows to like 9 feet tall without trying. It’s bizarre.

I read an interview with the writer, and he said he wanted to make him an Indiana Jones style adventurer without powers but DC mandated them, but even so, that doesn’t excuse the poor scripts.

It’s not the worst thing ever, but it is so bad it’s a waste of time. Maybe read an arc after the first to see if you might enjoy it. Maybe I’m too harsh.

I like his whole restaurant and bar deal. He’s a good pushing off point for Kyle. Their series together is good.

Definitely sounds pretty awful, Dixon (who I’m also a fan of) notwithstanding.

I mean, book clubs over in Community Events seem to get some substantial activity, but it is pretty hard to get people’s attention for impromptu discussion in the main Comic Books section. No idea why that’s the case since there are plenty of people around who are pretty well-read, but I’ve also not had much luck trying to start conversations about older material.

If anyone wants to discuss Firestorm, I’ll talk for days about him. A true 70’s and 80’s hero.

Honestly, I haven’t gotten around to reading any of his/their actual series, but I’ve generally liked what I’ve seen in terms of guest appearances and stuff.

Gerard Jones got arrested for something bad enough that I’m still not totally certain if I should mention it on here, and they purged everything with his name on it from DCU and Comixology shortly thereafter. It was something of a contentious subject at the time, but the net effect is that big pieces of Green Lantern and Justice League Europe are missing.

The Warrior phase was a big thing that Geoff Johns wanted to get rid of when he wrote GL: Rebirth. In the story, Parallax posses Gardner and that caused Gardner’s Vuldarian DNA to be overwritten by his human DNA. It didn’t make a whole lot of sense but it worked in returning him to the status quo.

They are so inconsistent about that. They removed a lot of his books, but not all of them. There is another person who hasn’t had their comics removed for the same thing. And then the new Joker movie has a Gary Glitter song in it. So DC doesn’t seen to care that much, just enough to annoy fans by removing some comics.

The older stuff completes this package known as the DC Universe. Wouldn’t be the same without that prior material to re-cultivate.

the '90s should get their own earth. they could be fun if they were lampshaded as being uniquely awful. everything is polybagged with a trading card! their currency is chromium! newspapers are holographic! everyone has five o’clock shadow, including the children!

I enjoy the concept of the Warriors bar too, but of the issues I read, it only featured prominently in one of them. I think a more dramedy style book set in a bar or some other form of community environment could work wonderfully as a superhero comic. Strange that this hasn’t already happened.

I’m not super wise to the GL mythose. What book did Guy and Kyle share apart from GL Corps or is that what you mean?

It seems like every time I talk about some random series, you are always game, but few other people interject. I guess most people read the newer stuff.

To be fair, I skip plenty of threads on series I’ve never read.

there was one where Major Force killed Guy’s mom’s friend. I have no idea where it was. Somewhere in Green Lantern 1990-

It was a crossover between Warrior and Green Lantern. It was in the series I read until I gave up. There’s not much to say about it other than the notable women in refrigerators bit. Also, I’m pretty sure they implied their was a secret facility in the Washington Monument which seems to misunderstand the dimensions of the Washington monument.

Warrior definitely sucks. What is your favorite series to feature Guy Gardner?

Regarding Gerald Jones, I see absolutely no reason his work shouldn’t be on the site unless he’s still getting royalties. In that case, I’d get it, but otherwise, I think DC should separate the art from the artist.

Has anybody ever asked the mods about why Gerald Jones stuff isn’t on here? Could it be some other reason? The inconstancy could have something to do with royalties in Jones’ contract, but that’s just speculation.

Who is the sicko whose work is still on DCU?

I like the idea of a 90s universe. Everybody needs giant shoulder pads. If it were parodying Image, everybody would be a member of a giant ensemble cast of lookalike characters who all have bad attitudes and no distinguishing characteristics. Every issue is people blasting other people with laser beams while shouting exposition at one another.

Yeah, that doesn’t make any sense. It seems they could have come up with something a bit better to get Guy where they wanted him, but whatever.

Come to think of it, Warrior was mid-nineties and Geoff Johns took over Green Lantern in the mid-2000s. What the heck was Guy doing in that decade? I don’t recall ever seeing him.

You are right that it is all just speculation, DC isn’t saying anything about why they were removed. Also I intentionally didn’t use names because I don’t want anything else getting removed.