Started reading the miniseries and enjoyed the moody atmosphere throughout it all. Obviously would love to discuss the infamous Green Lantern scene and other things in this story.

Link for anyone unfamiliar with this event here. 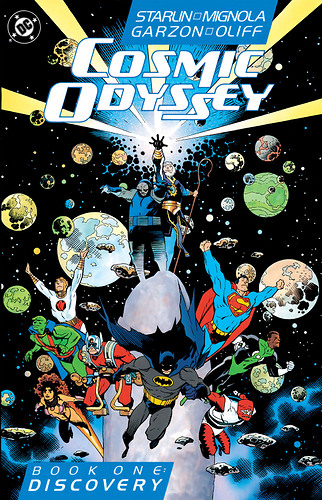 Since time immemorial, the forces of New Genesis and Apokolips have been at odds for control over the universe. Nothing less than the threat of total cosmic...

It wasn’t too bad, from what I remember. I read it a few years ago and enjoyed it well enough. But it also isn’t standing out in my memory the way that Legends is.

league. Later on, Changeling seems to have been de-aged a little bit and his code name got changed to Beast Boy. All of these Titans members are probably all now old enough to be justice league members.

I might be mistaken but it seems like a cover for Dawn of the DCU has the titans members alongside the Justice League I hope that means the Titan members Cyborg, Nightwing, and especially starfire join the Justice League when the title returns.

Despite all the mileage its gotten, the scene where John Stewart “kills a planet” is clumsy, makes no sense timing wise, and is arguably racist.

We are only human so even heroes should fail maybe about half of the time.

But they shouldn’t be rigged to fail in order to make them seem second class.

The Mignola covers were very nice

And as a side note, we still need Millennium digitized!

I really liked this series. Starlin really went to shake a lot of things up in the DC universe and he wasn’t pulling any punches. I liked that he tried a lot of crazy things also to define the New Gods for the modern times.

What’s funny is I didn’t get to read this series until way later but I would always read in other comics about what John Steward had done. And he was always this sullen character about it. I guess this is where he had his turning point from being the new hothead GL in the Neal Adams days to the more cold and calculated GL (I remember him mostly from JL Timmverse).

In anycase, I was definitely on the edge of my seat as I read this whole series and was impressed with how a few mature plot lines about war were being thrown around. A parademon that eats people when it was stranded on earth? Orion killing all sorts of Thanagarians to help Superman?

Then of course, John taking a giant gambit with a lot of bravado to save a world, only to fail. Starfire I feel makes a similar gambit of “guessing” on her end, except she actually succeeds.

I think I really loved the high stakes of it all. But I didn’t think they’d leave John with his guilt for so long though. And that apparently it was only in Scott Snyder’s run that Stewart and J’onn finally put it behind them?

I like that it was a Phoenix-level death count plot but that Stewart took the harder (and definitely controversial) path. I haven’t read a lot of John Stewart stuff inbetween all this, but do they retcon this out of his story?

Also!! The craziest thing from this mini series to me is when the New Gods reveal the anti-life equation is alive! That actually gave me goose bumps as I read it! Why hasn’t anybody touched on this again! This is like a creature that is arguably higher power level than the anti-monitor! Such a cool memorable moment for me.

Despite all the mileage its gotten, the scene where John Stewart “kills a planet” is clumsy, makes no sense timing wise, and is arguably racist.

I never liked the early characterization of John Stewart. It’s really corny how arrogant they made him and it shows the difference how legacy heroes like John Stewart were more or less treated with animosity compared to now.

I do agree with @ccolonyofcells_iamamachine, this kind of turmoil and consequences like the ones that happen to John Stewart in cosmic odyssey makes these heroes more real and that much more interesting when one cannot fix it by a different writer but something that must be dealt with overtime.

I have complicated feelings about the moment when Martian Manhunter callous approach to talk John Stewart out of a suicide attempt. It seems like Jim Starlin wanted to have J’onn essentially call him out while also reinforcing why John Stewart is a hero by angering him back into it, perhaps confronting him on why he was chosen as a green lantern. I feel that’s it’s never great to guilt a suicidal person into normalcy. 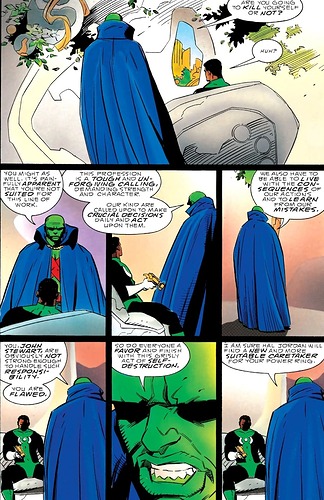 I hate but I also appreciate it because it’s risky characterization to make Martian Manhunter this cold-blooded and John Stewart at one point suicidal.

I remember reading an interview with Starlin that revealed that Starfire was used because Wonder Woman was off-limits at the time. Which really worked well for Kori because it helped raise her profile just a bit.

I personally think that the Wolfman era Titans characters should be in a League-level Titans group, which we may be getting soon.

I remember reading an interview with Starlin that revealed that Starfire was used because Wonder Woman was off-limits at the time. Which really worked well for Kori because it helped raise her profile just a bit.

You’re right about Starfire and I think it works better than Wonder-woman being in it. If there was anything I could change about this event is that Batman, obviously a popular superhero, didn’t need to be here either. His role with Forager on earth could have been easily replaced by any dc hero. It’s funny that half way through this story, Adam Strange comes in here and I think how he could have taken Batman role in it.
Besides being a Si-fi hero he also has a point being there to save both Rann and Earth. The hero of two world’s kind of thing could work well if he needed to save either from destruction.

I spoke to Jim Starlin about this book at a convention years ago, where he told me the original plan. DC wanted Cosmic Odyssey to be a counterpiece to Neil Gaiman’s Books of Magic, explaining the cosmic scope of the DC Universe the way Gaiman defined the magic scope. But he lost interest in that approach right away and did this instead. By the time he turned in the work it was too late for the editors to change the direction back the way they wanted it.

That would’ve been great. Books of Magic is still a classic mini-series for me. Sounds to me that he turned it in late on purpose.
DC’s cosmic side tends to get a bum deal, often overshadowed by the Lanterns, which can make the other cosmic characters seem unnecessary.