okay, so… I have way too much stuff to be able to post it ALL here, but here’s a look at my Office/Podcast studio, where I spend the majority of my time when I’m home… so these are the geeky things I surround myself with:

Here’s a look at my main view as I sit at my computer: 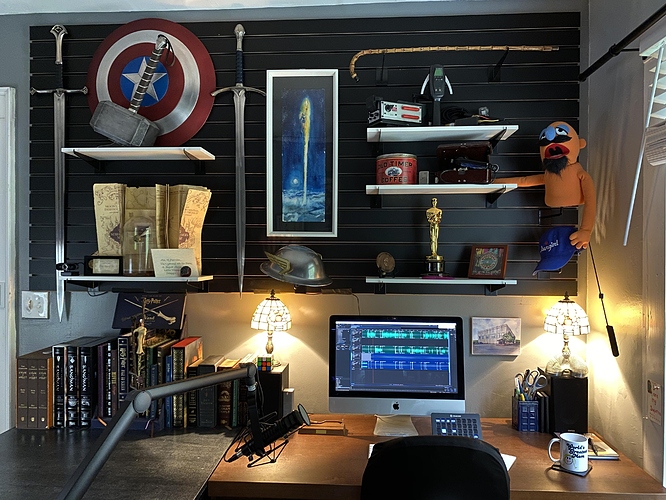 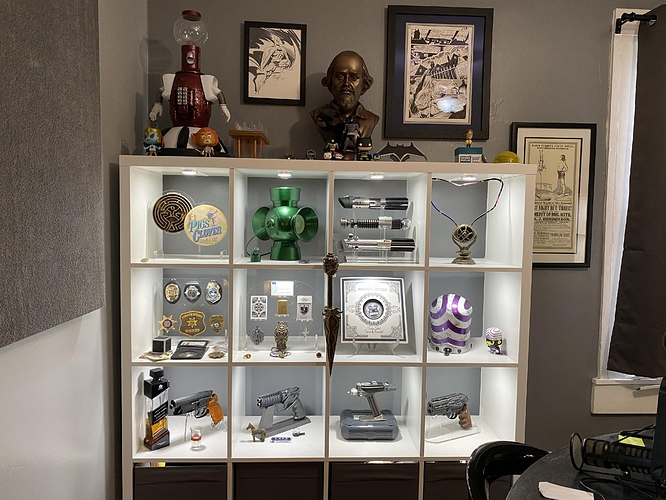 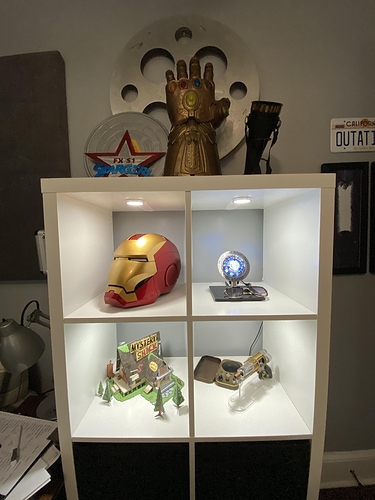 First off, my Jay Garrick Flash helmet… this is the actual helmet seen on Stargirl: 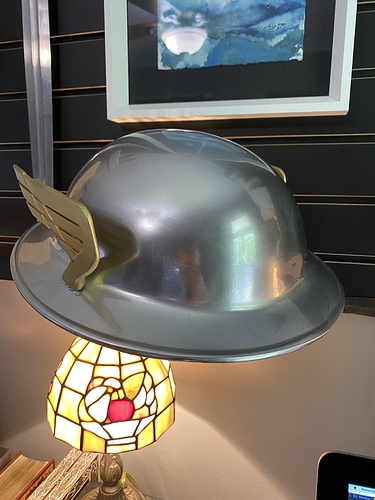 Speaking of Stargirl, here’s a painting I had commissioned by one of my favorite artists: 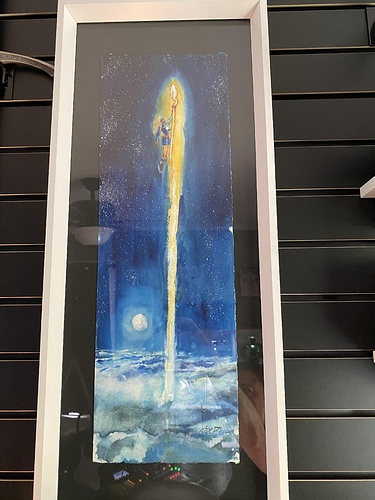 Neil Jackson, who plays Icicle on Stargirl, got me this lovely image of the Injustice Society, signed by all the members of the team, and Geoff Johns: 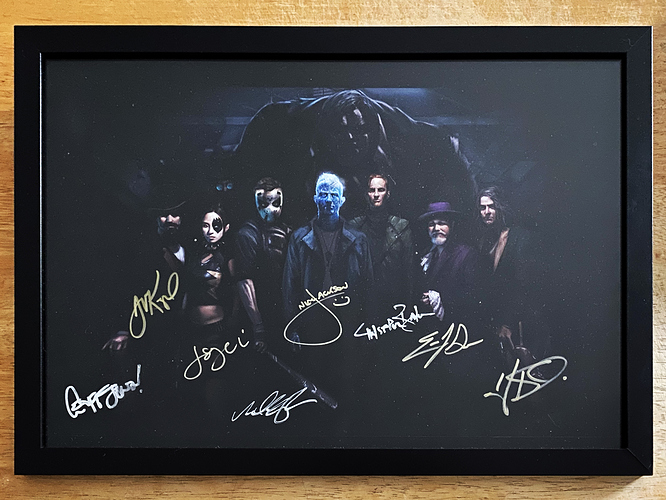 My Trusty GL Power Battery… this is the first one they ever made, and I’ve had it for about 20 years. It was pretty much my first prop replica. 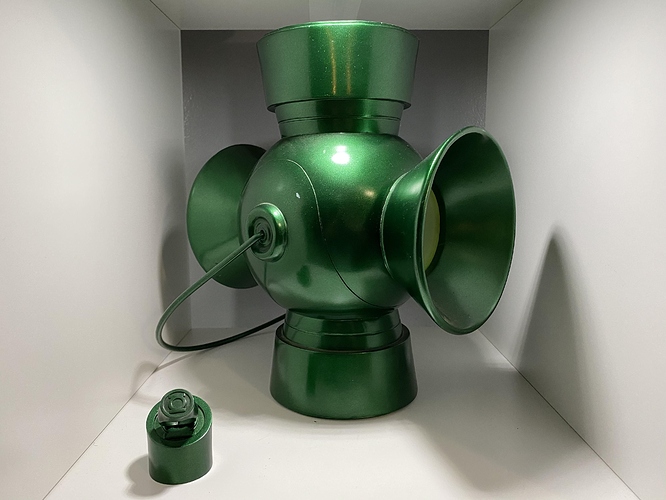 Here’s a couple pieces you may recognize from AMC’s Preacher: 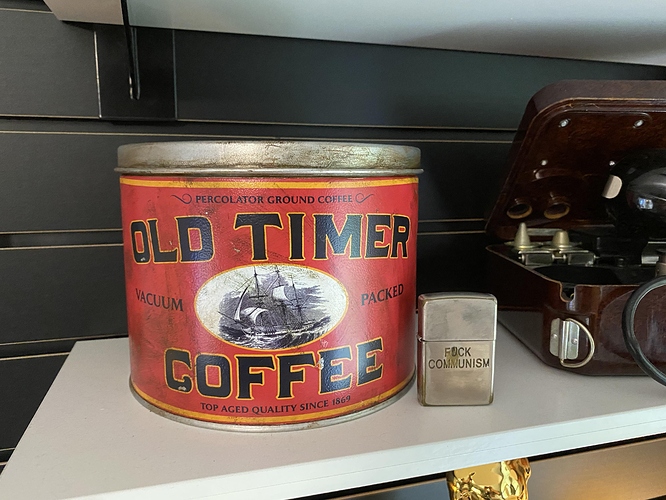 As well as this screen-used Angelville poster: 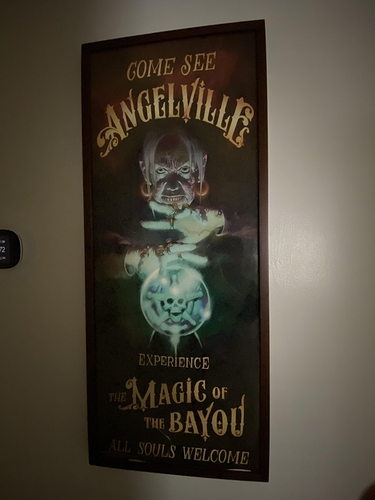 My Bat-Shrine… an original page of a Batman comic drawn by the greatest Bat-Artist ever, Norm Breyfogle, as well as a convention sketch by him, and his edition of the Batman Black and White statue series… plus a Batman '66 Shakespeare bust and some various other pieces. 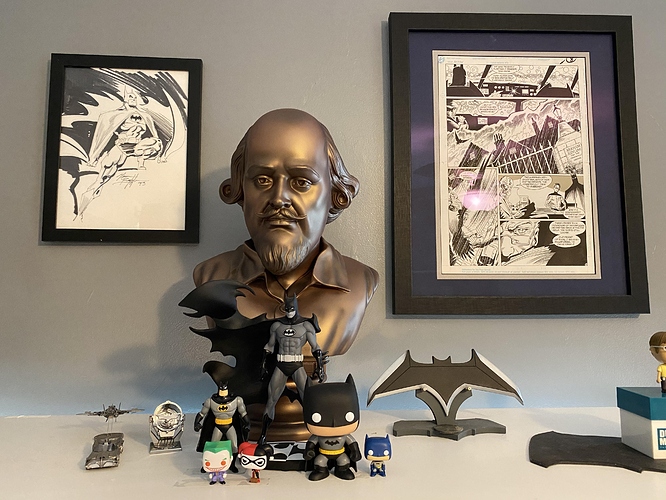 Here’s another Breyfogle sketch, but it’s out in the Living Room: 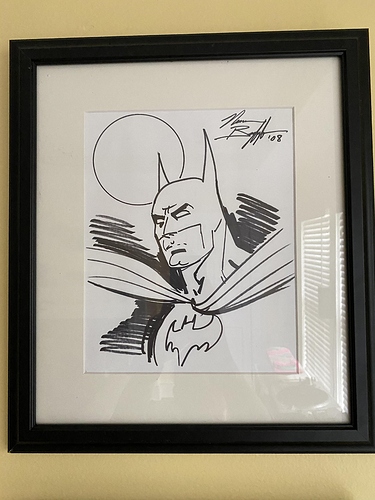 And a page of original art from Hellblazer: 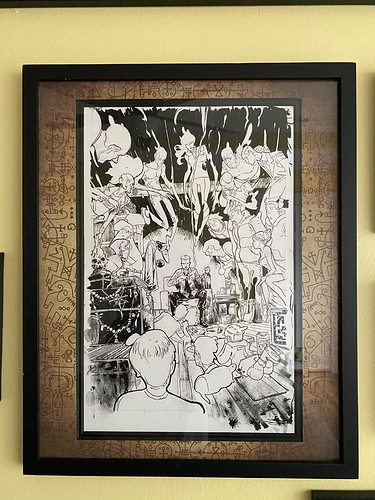 Speaking of John Constantine, here’s a bunch of props from the show… some are replicas, some are screen-used, or production-made. The Zippo is one of my all-time favorite pieces. There’s also a Legion Flight Ring and a Reverse Flash ring, and Dean’s God-detecting necklace from Supernatural: 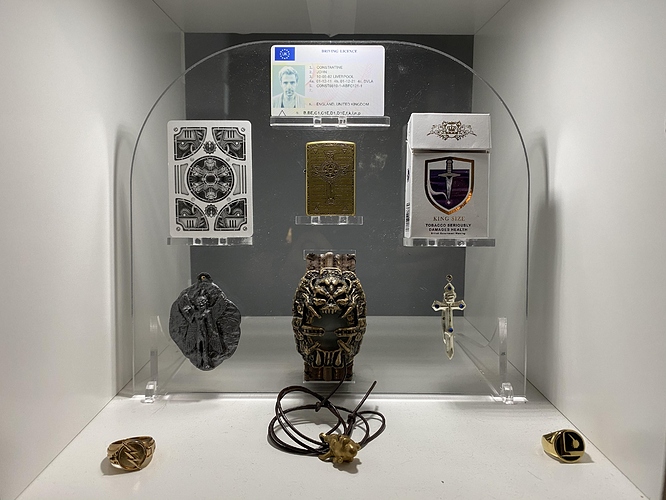 Here’s a replica of the record from episode 3 of Constantine, “The Devil’s Vinyl” – I recreated all the art and even had the record pressed, so it plays the Willy Cole song with the Devil interrupting, just like in the episode. The B-Side is a Mucuous Membrane song, as performed by a group called Spider-Legs… though they’re performing it AS John and MM (this replica led directly to me being a film/TV graphic designer for a living): 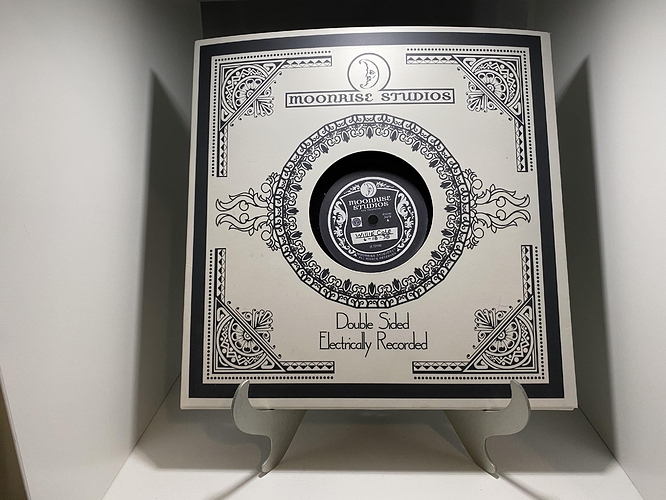 And the devil contract from that same episode: 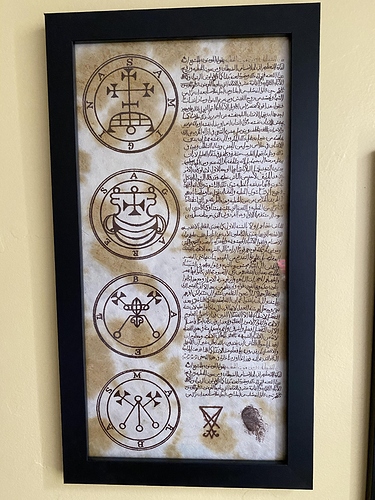 This one is a bit random… it’s got badges from Gotham, Central City and Starling city, but also 2 versions of SHIELD badges, a replica Eureka badge, screen used sheriff patch and GD lapel pins (also from Eureka), a screen-used badge from Sleepy Hollow, and then Fury’s Toolbox and Coulson’s Cap card set from Avengers. 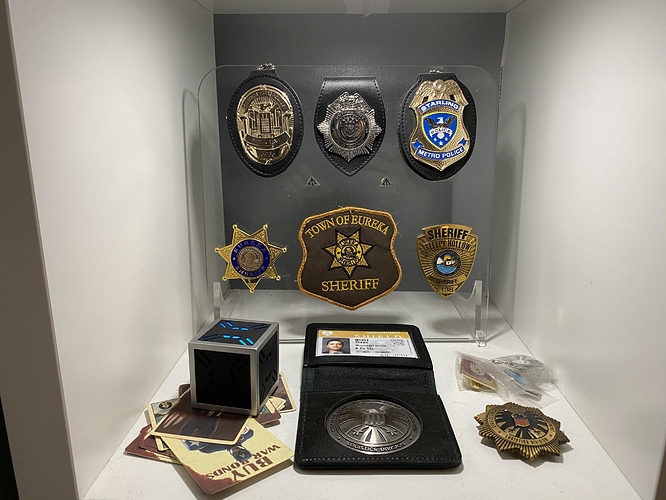 Speaking of SHIELD, here’s an ICER: 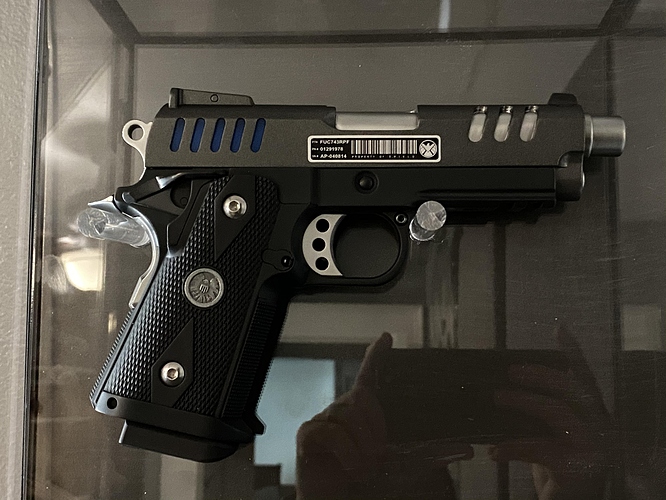 And I guess we’re into Marvel Stuff now… so here’s an Arc reactor… I put this together from a VERY involved kit, mostly metal… very high quality! Also pictured: Cheap EDITH glasses: 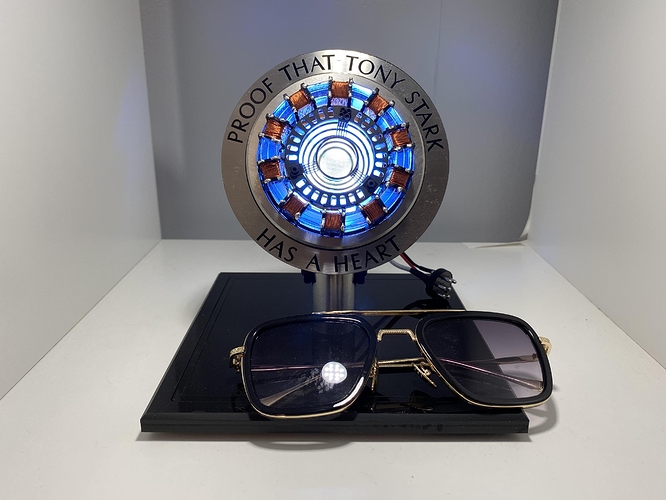 Here are a couple of my favorite pieces… Mjølnir is made from parts cast straight from the hero molds and assembled/finished by me… though I recast all the metal bits in the handle from real metal, and I made the strap from leather from scratch – The Cap shield is real metal, but came painted (even the exposed metal band was painted silver) so I stripped it and build a turntable to sand it with the proper radial grain, then repainted it to look anodized. The improvement is incalculable: 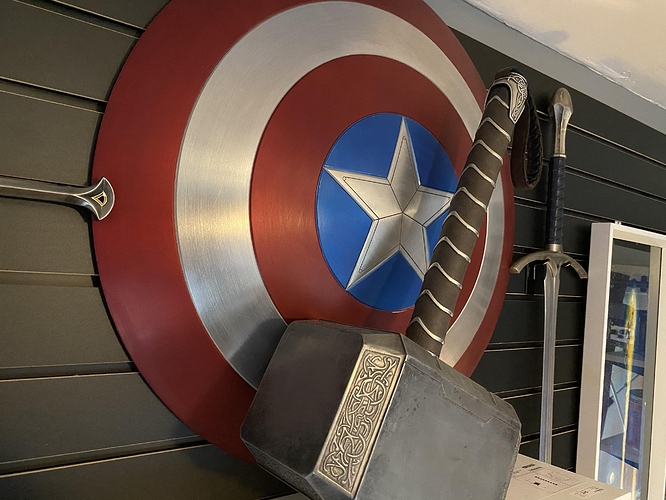 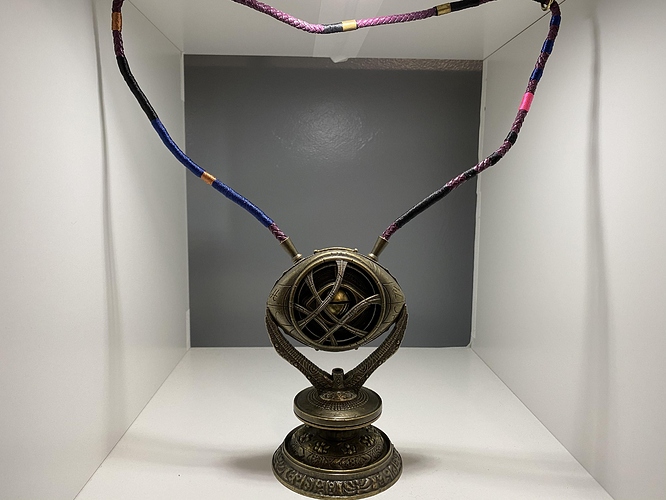 Here’s a Blade Runner blaster I made… it came as a kit, but I machined my own steel barrel for it, as that was the only non-metal part on the kit. This thing is HEAVY: 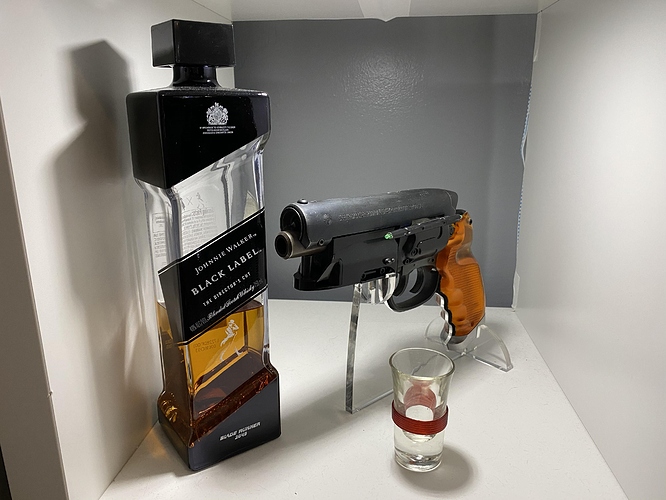 Blade Runner 2049 blaster made by a friend of mine, along with some random other 2049 bits: 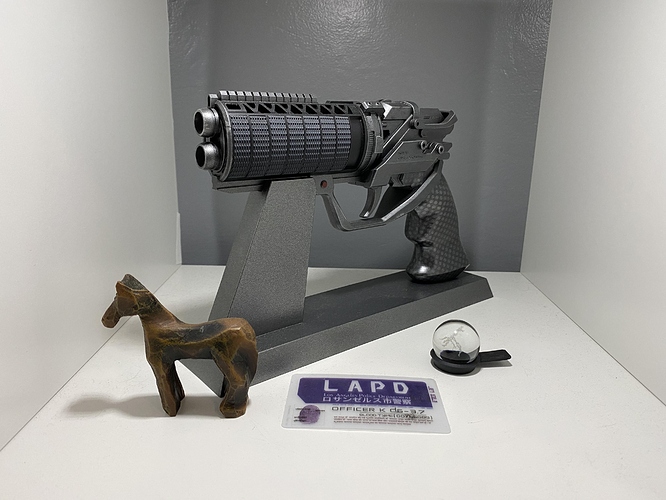 Star Trek Phaser from The Wand Company… probably the best replica of this ever made: 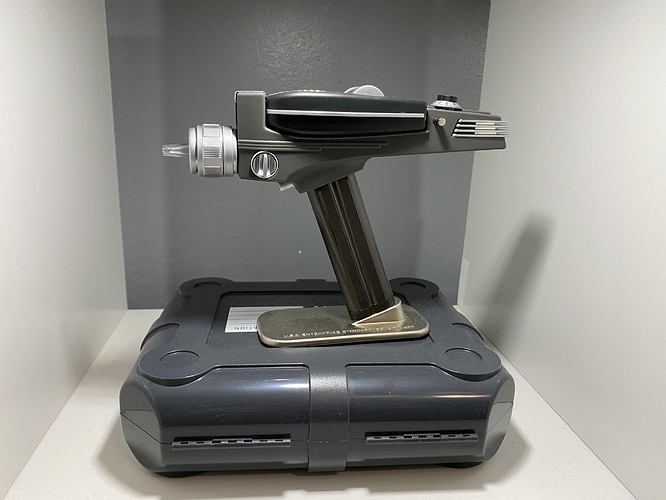 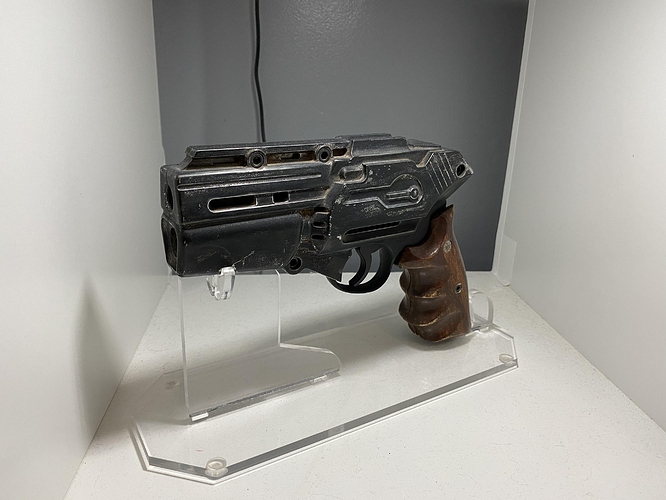 Any Warehouse 13 fans? Here’s a full metal Farnsworth and Tesla gun… I made the gun from a kit and made the Farnsworth from scratch… it’s got electronics and the insides are made too look like 1930’s high-tech… we never saw the inside on the show, but I made it what I imagined it would have looked like: 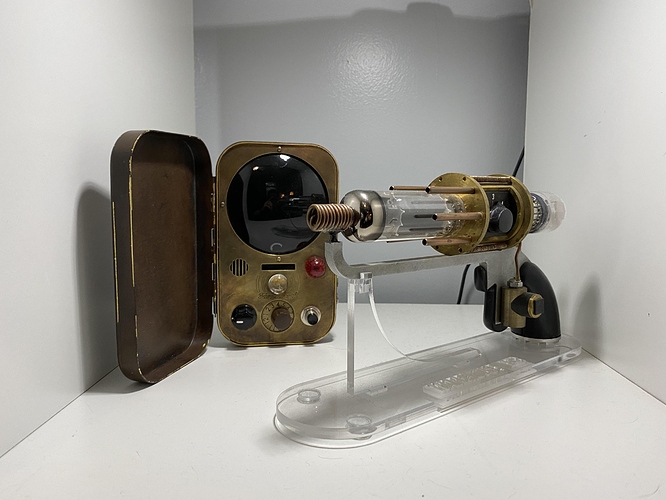 THE MAZE… I’m really proud of this… I made it 100% from scratch… I recreated the cover art, made a vector pattern of the maze, including weird wonky bits such as uneven paths, laser cut it in several layers, glued it, stained it, aged it… It’s one of my crowning achievements: 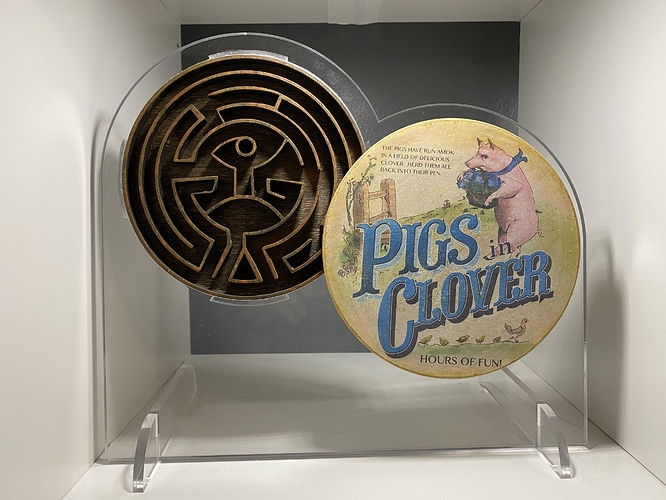 And my other crowning achievement… if you’re a Beatles fan, this is a PERFECT replica of the poster that inspired John Lennon to write “Being for the Benefit of Mr. Kite” years in the making, but no one else has come close… It is my proudest achievement! 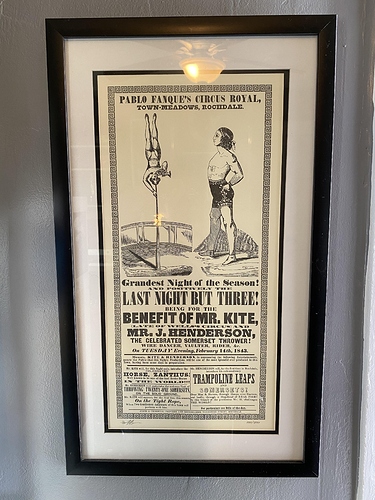 Hope you guys enjoyed it! There’s a lot more, but this is time-consuming! If there’s anything you want a closer look at, let me know!

That Injustice Society one is amazing!

Wow. This is great.

That is one hellufa Stargirl commission!

This is amazing. You are a true artist and your passion for detail shows in everything. My only question is…where did you get Tom Servo?

Etsy! The guy does a Crow also, but it’s pricier, so I haven’t managed to bite the bullet yet.

Freaking rad! That collection is extremely impressive! And I am envious of a lot of things in that collection, but I’m really envious of the Jay Garrick helmet! (Lol, one of the things that catches my eye is that rod hand muppet style puppet)

Oh, and looking through again, I see a ton of more stuff I am jealous of! The mr kite poster is freaking awesome! One of my favorite songs of all time.

This. Is. Incredible. I don’t even know where to start! I’m just so blown away and love every part of this!!

Thanks! I have a video on YouTube all about the poster, if you just look up “History and Evolution of the Mr. Kite Poster” you’ll find it, if you’re interested!

Jeezum Crow! That’s an absolutely bonkers amount of stuff. Well done. Not to be personal, but your paycheck is obviously much, much higher than mine.

Are you Q from James Bond?

Well, this is my coffee mug… 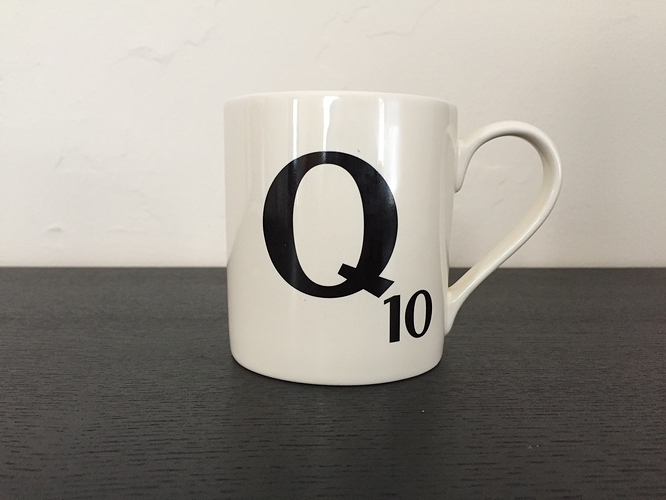 Do you do freelance? I’ve got a terrible commute and could really use a car with missiles

I love all of that stuff, but your Tom Servo is amazing too!

Are you planning on adding Crow and the other 'bots when the opportunities come along?

Crow, for sure. Eventually. Just the duo is enough for me.

I thought i smelled fudge

This really makes me want to reorganize my collection. Awesome set up!