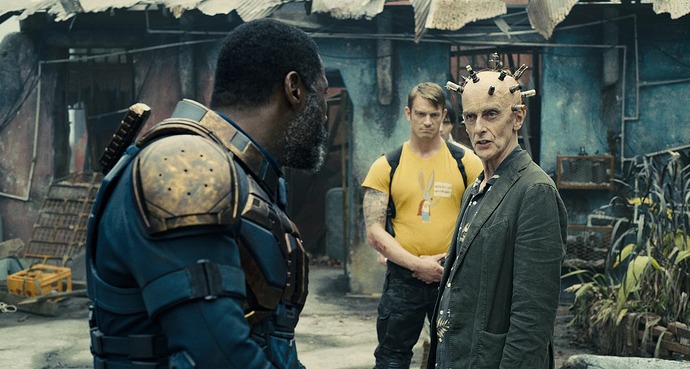 There comes a point in even the greatest leader’s career where they have to admit they made a mistake. The moment when what seemed like a perfectly good plan at the time has become an unmitigated disaster and it’s time to scrap it. Unless, that is, you’re Amanda Waller. Then, in the face of repeated horrible failures, you keep trying over and over again until everything goes the way you want it to. Such is the obstinate tragedy of the Suicide Squad and the Thinker. Every time Waller has attempted to recruit this Golden Age Flash villain and his many successors, the experiment has ended in utter chaos. And yet, it’s never long before she goes and tries it again. And again.

I mean, we get it. The ultimate predictive tactician, a super cyberhacker, a mind-controlling
telepath—on paper, the Thinker makes an attractive asset to any black ops team. But isn’t there a certain point where you have to recognize all the wreckage, cut your losses and move onto the next plan? Not for Waller, apparently, who’s been trying this scheme since 1988 and has kept at it up through James Gunn’s The Suicide Squad. We’re not sure how that one’s going to end for her, but if history is any indication, the answer is “not well.” Let’s take a look at each time this plan has gone horribly wrong.

The Suicide Squad has a well-earned reputation for a high turnover rate, but the first near-total party kill was in 1998’s Doom Patrol and Suicide Squad Special. In this crossover, Amanda Waller assembles a “B” squad while the regular team members are occupied elsewhere. But as a newly formed Squad is wont to do, it wasn’t long before the team’s members began conspiring to make a break for it. Unrestrained yet by internal explosives—that wouldn’t become a Suicide Squad thing until much later—duties fell to the original Thinker, Clifford DeVoe, to use the telepathic abilities of his “Thinking Cap” to keep the rest of his team in line. That worked fine, until fellow team member Weasel made his move by slashing open the Thinker’s throat, killing him.

Hey, isn’t Weasel also in The Suicide Squad movie? Thinker may want to watch out for that.

To read about the rest of the terrific failures for Amanda’s plan, head on over to DC Comics!

Do you think that The Thinker should join the Suicide Squad? Let us know in the comments below!

I’m super excited to see him in it!!!

I think he be good for the team in some ways