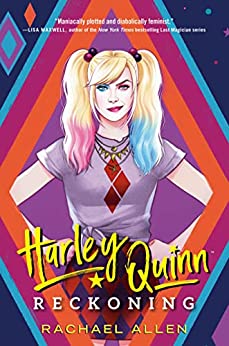 Well, I was looking through on my kindle to make sure I got my pre-orders down(i don’t like to subscribe) and came across this is a brand new DC icons book and this time it’s going to be a trilogy: Harley Quinn: Reckoning to be released on 4/26/2022 and you did not read this wrong it’s an official novel, not a graphic novel available on Kindle, audible and Hardcover book.

Synopsis: When Harleen Quinzel scores an internship in a psych lab at Gotham University, she’s more than ecstatic; she’s desperate to make a Big Scientific Discovery that will land her a full-ride college scholarship and get her away from her abusive father. But when Harleen witnesses the way women are treated across STEM departments–and experiences harassment herself–she decides that revenge and justice are more important than her own dreams.

Harleen finds her place in an intoxicating vigilante girl gang called the Reckoning, who creates chaos to inspire change. And when Harleen falls for another girl in the gang, it finally seems like she’s found her true passions. But what starts off as pranks and mischief quickly turns deadly as one of the gang members is found murdered–and a terrifying conspiracy is uncovered that puts the life Harleen has worked so hard for at stake. Will she choose her future–or will she choose revenge?

In this refreshingly feminist spin on the story of our favorite villainess, Harley Quinn: Reckoning traces Harleen’s journey from precocious, revenge-obsessed teenage girl to a hardcore justice-seeker on her way to becoming the most captivating Super Villain of all time. This is one story that you won’t be able to put down.

Side note: well i want this thread to be about Harleys trilogy i thought i would throw mention another book of the line Black Canary: Breaking Silence a great novel of the DC icons series reimagining one of the first badass ladies of DC and frenemy of Harley’s. Synopsis: DC Icons continues with the first-ever YA origin story of superhero Black Canary, from the internationally best-selling author Alexandra Monir. In this thrilling novel, Dinah Lance’s voice is her weapon. And in a near-future world where women have no rights, she won’t hesitate to use everything she has - including her song - to fight back.

Dinah Lance was eight years old when she overheard the impossible: the sound of a girl singing. It was something she was never meant to hear - not in her lifetime and not in Gotham City, taken over by the vicious, patriarchal Court of Owls. The sinister organization rules Gotham City as a dictatorship and has stripped women of everything - their right to work, to make music, to learn, to be free.

Now 17, Dinah can’t forget that haunting sound, and she’s beginning to discover that her own voice is just as powerful. But singing is forbidden - a one-way route to a certain death sentence. Fighting to balance her father’s desire to keep her safe, a blossoming romance with mysterious new student Oliver Queen, and her own need to help other women and girls rise up, Dinah wonders if her song will finally be heard. And will her voice be powerful enough to destroy the Court of Owls once and for all?

Rad! I’m in the mood for a new book, so the timing on this is perfect.

This is not the first time Harley has been in prose and not comic!
Mad Love written by Paul Dini! 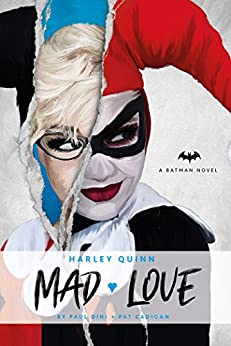 DC Comics novels - Harley Quinn: Mad Love - Kindle edition by Dini, Paul, Cadigan, Pat. Download it once and read it on your Kindle device, PC, phones or tablets. Use features like bookmarks, note taking and highlighting while reading DC Comics...

Ahh, the only Batman story to be a comic, a Cartoon episode, and a novel =).
I have seen the episode, have the novel, and need to read it (along with the novelization of the Court of Owls) yet have not touched the comic here on DC universe infinite yet. there are actually quite a few novelizations. DC icons have also had the first three novels turned into graphic novels: Wonder Woman Warbringer (it got boring for me when wonder woman was revealed to be bulletproof), Batman Nightwalker (enjoyed it), Catwoman: soul stealer (Ihave a love hate thing with this one).

I have a few of the novelizations on a shelf that I have yet to read. Some of them are Infinite Crisis, 52, COIE, No Man’s Land, and The Death and Life of Superman.

NML was great, I actually have read the Novilization but not the actual comic with that one =) going to have to look at Infinite Crisis to see if I can find a copy.
and i just ordered a copy for 6.12 on amazon.

The publisher declined my request for an advanced copy of the book, but I’ll probably grab it at some point.

This does sound pretty interesting – it looks like they do play around with what is established Harley canon with this “girl gang.” I wonder if the other girl Harley falls for is this universe’s Joker-esque figure.

I’m not sure when I’ll get to it with all the other prose books I’ve been meaning to read (I’ve been TERRIBLE at keeping up on prose the past few years, it’s honestly knd of embarassing), but I’m definitely up to giving this and the Black Canary book that’s also mentioned a shot.

The books of the DC icon series are also available as an audiobook too as well. I have BC: Breaking silence as an Audio book.

How is that audio book? I also have Audible, and I’m curious to find out about them.

They are Great the story was highly enjoyable and well-written with good performances put on by the narrators. honestly, all the DC icon books I have read are good (can’t say anything about Superman Dawnbreaker dislikes the man of steel but oddly like Clark Kent). The only one I really disliked was Catwoman Soul Stealer, and that was due to me being a diehard Selina Kyle/Bruce Wayne shipper and it was a luke fox/Selina story. it’s still a great story and I managed to finish it by buying the graphic novel. but I just hate it because luke and Selina were getting together so easily when batcat has been forced to dance around each other for 82 years in the primary comics.

I have a few of the novelizations on a shelf that I have yet to read. Some of them are Infinite Crisis, 52, COIE, No Man’s Land, and The Death and Life of Superman.

Of those, prioritize Batman: No Man’s Land.

Reason 1 being it was written by Greg Rucka.

Reason 2 is that its the best novelization of a comic event.

It keeps all of the high points, trims the fat and comes together for a highly-satisfying read that rivals the comic story its based on for sheer entertainment value.

These original novels are pretty rad.

I listened to the audiobook of Wonder Woman: Warbringer a couple years back and it was one of the best audiobooks I’d ever heard.

SN: I’ve listened to, maybe, 5 audiobooks in my life, so far. I vastly prefer to read the text, rather than listen to someone dictate it to me, but with Warbringer, I decided to do something rather different and sensational (with a skosh of brave and bold underpinnings, natch), so the audiobook it was!

well i like audio books because i can listen to them and do something else at the same time, but i also enjoy sitting down and reading.
however a well narrated audio book is highly entertaining. you should check out the audible original for Neil Gaiman Sandman it has a fully voiced cast. 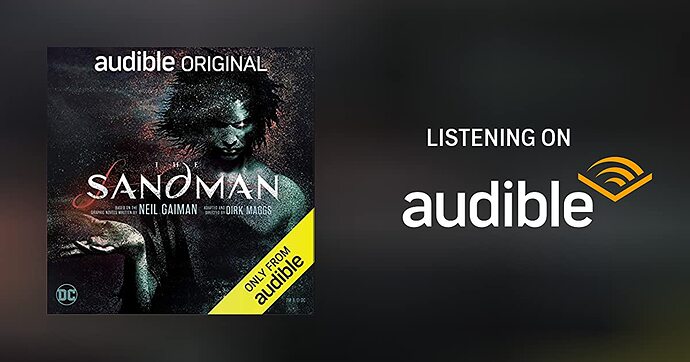 Check out this great listen on Audible.com. Please note: This content is not for kids. It is for mature audiences only. Just like the original graphic novels, this audio adaptation contains explicit language and graphic violence, as well as strong...

yes its that Neil Gaiman.

Oh, I’m highly-tempted by that one, make no mistake about it.

I like audiobooks just fine, but when I want to listen to something as I mosey about, I usually prefer music.

Like the Harley Quinn soundtrack, which would likely pair beautifully with her upcoming book.

I switch between music, audiobooks, and tv shows when Id want some white-nose. although I do not listen to audiobooks if I am working on written fanworks.

I often have the Buzzr channel (over the air and free, plus it has an app) on when working.

Vintage game shows are quite soothing to listen to as I work, I find. IDK why, but they are.

I have amazon music unlimited and tend to use that. prefer hard rock and heavy metal, 90’s country music (its what i listened growing up) and I will admit some Disney songs…i am really fond of let it go from frozen.

Let It Go is a catchy tune, and on my Spotify playlist.

…along with some Madonna tunes that fit Harley to the letter.