The War For Earth-3 Discussion Thread 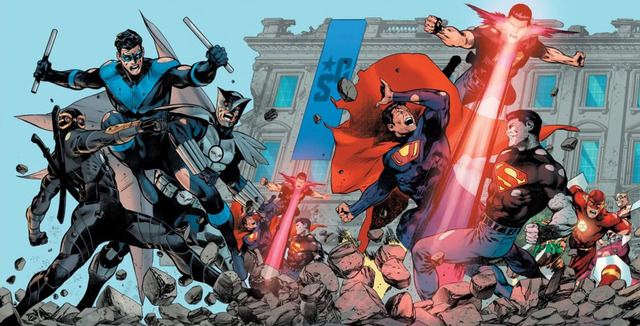 The Teen Titans, the Flash and the Suicide Squad all collide on Earth-3-home of the evil Crime Syndicate-on the hunt for former Task Force X mastermind Amanda Waller. As Waller tries to take over the alternate Earth and dethrone evil versions of Superman, Wonder Woman, Batman, and other heroes that rule it, her former partner-Rick Flag-arrives on E-3 bent on making Waller pay for her crimes, while the Titans and Flash hunt for a missing academy student they believe was kidnapped by Waller to form her mysterious Justice Squad.

Here’s a complete checklist for this five-part weekly event that unfolds through March:

Are you reading this crossover, and if so, what do you think of how its begun?

Are you reading this crossover,

Nope. Hope everyone who is loves it.

It was a light week for new books I was interested in, so I randomly picked up the first two parts, and so far, so good!

I’ll grab the rest, as I enjoy weekly stories.

In my quest of catching up on books, I have read this. This might be the most unnecessary crossover I have seen in a while but I like it. If anything, this is ramping up my excitement for Dark Crisis. Crime Syndicate with Waller is an interesting idea.

I do like Superwoman (Donna Troy) in this. Sure, she is a no-good cheating baddie but she seems to be the most easily swayed to be a good or at least neutral character.

One thing of note, Teen Titans Academy and Suicide Squad are both in the process of closing up shop, which makes me think after Dark Crisis we will see new titles for TT and SS. The Flash has maybe one of the best crossover issues that I have ever read. It is definitely a crossover but that doesn’t mean the Flash story is on the backburner. It successfully continued the story of Wally and his family while adding the new concept of the War For Earth-3.

By the way, the story arc in The Flash leading up to WFE3 was a lot of fun and I am convinced this title has become DC’s answer to Fantastic Four, which I am here for!

I’ve been buying each part every week, but due to Trial of the Amazons, World’s Finest and other reads, its unfortunately been put on the back burner.

However! As the conclusion debuts this Tuesday, it is my sincere goal to get everything that’s out now read and stuffed into my mental sponge, so that when The War for Earth-3 #2 debuts next week, I can just jump on in and immediately read the finale to what has been one of the most fun crossovers of the year, so far.

Re: The Flash, Jeremy Adams’ run is great. I haven’t yet read what came immediately before the War for Earth-3 issue (I know the story involved Eclipso), but it got me back into reading the title in singles, and I’m eager to see what happens next in Adams’ run.

Another bonus of this crossover, it is only 5 issues. I am seeing a new trend in DC crossovers that might have started with Endless Winter. I know for sure that it carried over into Fear State and Trial of the Amazons, the titles that are event specific while the meat of the story takes place in the titles that make up the event.

Another bonus of this crossover, it is only 5 issues.

And, another bonus is that it ran weekly.

I wasn’t all that aware of this crossover prior to it coming out, but when I saw an ad for it, I thought “That could be fun, especially since its weekly.” and well, here we are, Fun Land. Population: Us!

What a bizarre ending. It felt like Calvinball where people just kept making up new rules as they went along. The Titans were there… why? Did Flash go there with the Titans? What… just happened?

I oddly enjoyed that ending. At @Locothedog123 mentioned, some of it didn’t make sense. However, seeing Superwoman go against Ultraman was great! This has been building since the last Crime Syndicate miniseries.

In my opinion, the shorter events from DC have been my favorites and this ranks up there.