So, they are starting to tease a sequel to the “Dark Knights Metal” event. I need to know any story that may be relevant that happened after DKM came to a close. I think I have a list of everything The Batman Who Laughs has appeared in since that event, but anything else and confirmation is welcome.

Anything Year of the Villain is a good prerequisite. Snyder says you won’t need it to jump into the story, but it’s going to help understand why the state of the world is the way it is as mentioned in the press release.

Start with Justice League for sure and follow the stories that branch out.

Here are some series that play off of each other as they build up the YotV, but honestly there is bleed over in all of the major series since 2018.

I think the only bummer is most of the YotV stuff was 2019 and might not be on DCU by the time the new series hits stores. 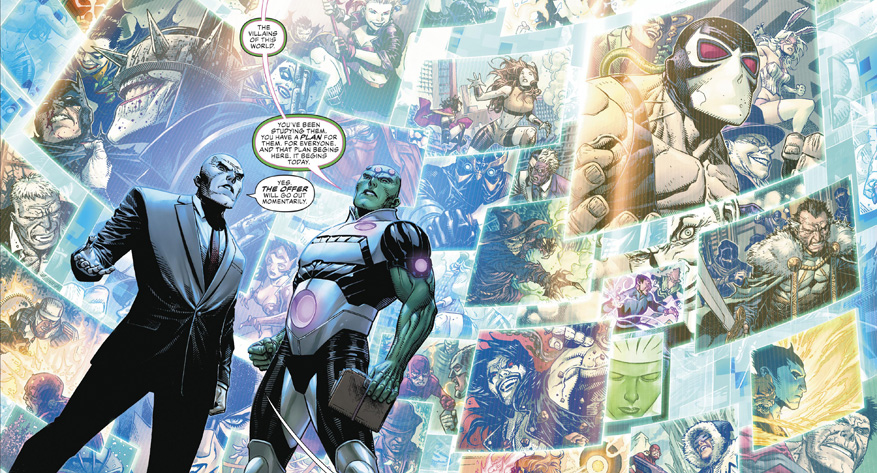 DC Comics has a rich pantheon of supervillains, so it’s no wonder the publisher would want to put them all in the spotlight as often as possible. With a roster including Lex Luthor, the Joker, Black Adam, Deathstroke, and the Turtle, how could you...

Yea, that is a LOOONG list. I did some research, so I think I have the gist of it. Lex Luthor goes off on some discovery, becomes evil, and helps free Perpetua (mother of the monitoer, ant-moniter, and the world forger) by gathering basically every bad guy and taking on basically all the heros. Sorry if that is a simplification. I think I might jump straight to the Hell Arisen 5 parter that help concludes YotV

I read No Justice, I am a big fan of JLD…from what I hear, JLO isn’t that good. Also, I really haven’t heard anything major come from that series. What issue in JL does Scott Snyder stop writing for the series?

JLO is definitely more Darkseid’s story, but was worth calling it out as he’s going through his own impact of Perpetua’s return.

Hell Arisen is only 2 issues in and I’m very interested in the next one. I haven’t quite figured out if Lex really knows who he is dealing with when in his battle with TBWL.

Justice League Dark ties in very well to the announcement made today as it relates to Wonder Woman’s story. That part of the story looks to have resolved in Issue 19 and definitely wont be on DCU in time for May.

All the one shots for the Infected I’ll be honest you could probably skip for this. They were more to set up the new Batman/Superman series. The core story stands out well enough on it’s own in Synder’s JL. The related stories help you get more detail of how the whole world is handling it. At one point I think even Batman calls out in a JL issue just how much he has going on in his other books.

Sounds awesome. Just heard about it today on the Facebook group.

I just caught up with all TBWL stuff yesterday. Anything Source Wall has my attention.

How far back you want to go? New Guardians , Green Lantern, and GLC (with their follow up short runs) will give you a lot of source wall material to reference going into the story of Perpetua.

Luckily, I read all of those 1st. I usually won’t start until there all mapped out & written down in my notebook. Lantern (all of em) were so good I couldn’t stop. Loved the whole Rayner being trained by Ferris & multiple others to master all the rings, then eventually fly thru the Source Wall as a White Lantern. Larfleeze was the only one on my journey I thought might stop his quest. It was genius, how they twisted that part to allow Kyle to master Avarice.

Godhead has to be my favorite or close to. 4th world, Forever People, New Genesis & Apokolips just melds perfectly together.

I think that’s what I’ve loved about JLO recently. Darkseid understands the impact to The New Gods.

Right? Oh it’s so perfect. Female Furies was one I couldn’t wait 4. Got to read it yesterday. I love seeing Granny Goodness’ semi-origin story when she was young. Only 2 issues but I love it as expected & can’t wait for more.

JLO was so good tho, I got off subject with Furies.