The Unexpected Horrors of the Nice House on the Lake 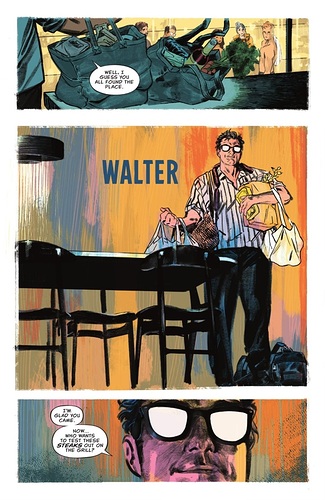 It’s a mystery that kicks off in a familiar way, if you’re a fan of mysteries. But then something happens - not the thing you’d expect, but something far worse. The Nice House on the Lake is an apocalyptic sci-fi/horror tale that barely revs its engine in issue #1, but is sure to take off. It comes from author James Tynion IV (Batman, The Joker, Something is Killing the Children), artist Álvaro Martínez Bueno and colorist Jordie Bellaire.

As you may have guessed, the bulk of the story takes place in a lake house, but “nice” lake house is an understatement. It’s enormous, gorgeous, pristine, and remote—there’s not a single other lake house in sight. It’s located in upstate Wisconsin, and for a week in June, it’s being rented out to a bespectacled guy named Walter. Walter has decided to host a retreat to get away from it all for twelve of his long- time friends. You know guys like Walter. He’s one of those people who have always been a little odd, but not without his charms.

Our cast of characters arrives at the house the way they might in an Agatha Christie novel or a game of Clue. Though every guest knows Walter, no one knew for sure who else was coming. He preassigned each of them a nickname that corresponds to their profession. The Accountant. The Writer. The Comedian. He also assigned them each a symbol. Again, he’s always been a little out there.

To learn more about the mystery behind The Nice House on the Lake, head over to DC Comics!

Have you started your vacation at The Nice House on the Lake yet? Let us know in the comments below!

I have long been a fan of Tynion’s horror output, dating back to his “Apocalyptic” trilogy – Memetic, in particular, is a must-read. But after just one issue, this really feels like something special. Absolutely worth the read for horror fans, or just fans of great comics.

(Also, Tim Drake and Conner Kent fans might want to keep an eye out for a particularly juicy easter egg. Looking at you, @casasstrophe.)

I agree, this is truly a unique series and it’s something special that you can tell that from the first issue.

Super excited for what comes next!

ok sold, boosting it to the top of my reading list

I…this comic was incredible. I can’t wait to see where it goes next. the worst part about it is having to wait for the next issue. I’m hooked

This was a great first issue. I have faith that each following issue will be as good as this one. There are a lot of questions I have and even a huge WTF moment. I can’t wait for the second book.

The cliffhanger was painful! I gotta know more!

Going to have to read after the comments above.