The Talent Behind The Return of Milestone Comics 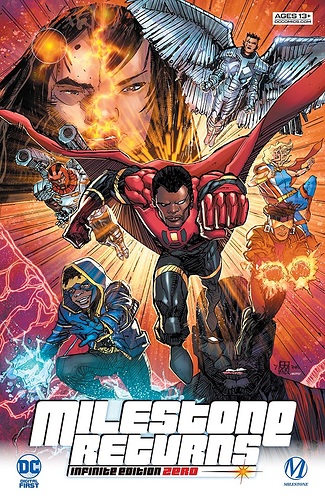 It’s hard to believe it’s finally here. But with Static: Season One #1 on shelves right now, it looks like the Milestone Comics which redefined the medium are back to do it again. Soon, Rocket and Icon: Season One and Hardware: Season One will follow Static’s lead, and it almost feels like we’re seeing long-lost friends come home. But in truth, what really made Milestone revolutionary was never just the characters, but the talent involved. Originally founded by four Black creative giants—Dwayne McDuffie, Denys Cowan, Derek Dingle and Michael Davis—Milestone’s message of diverse, boundary-pushing comics has always extended to its own staff, where the marginalized could tell their stories through these characters without qualification or hiding behind impermeable layers of metaphor. Milestone wasn’t just a line showing the disenfranchised that they had heroes, it was a line which allowed them to tell their stories from their own perspective.

For the Milestone relaunch, some of the original creative team’s most celebrated talent have returned to answer the call. But Milestone has always stood to promote new voices as well. So, in the Milestone spirit, it’s really not enough to know the names Virgil Hawkins, Augustus Freeman and Curtis Metcalf—it’s just as important to know the talent behind them too.

To learn more about the incredible talent behind Milestone, both old and new, head over to DC Comics!

Are you excited for all the new talent joining the veterans on the Milestone team? Let us know in the comments

I loved Static #1 I can’t wait for me. Im so happy Milestone is back!!

Are you excited for all the new talent joining the veterans on the Milestone team?

Are you excited for all the new talent joining the veterans on the Milestone team? Let us know in the comments

Heck yeah! I hadn’t looked at all at who was doing these issues, just looking forward to them in general, and had assumed it would be mostly Cowan and Dingle, maybe Priest and ChrisCross. So excited to see both old, old-but-new-to-Milestone, and new/new-to-me talent. This is the first I’ve heard of Vita Ayala, and loving their writing so far!

I hope to read it someday, most likely when it arrives at the library.