The Struggle of Hawkman

Hey guys I’m brand new to the app but I’m a lifelong die hard dc fan I dont even watch the marvel movies this universe is everything so I take it hard when a character like hawkman isng fully appreciated. Robert Vendittis current run is absolutely amazing but I worry he will get cut short due to sales. What do you think should be done with hawkman on the printing side that could easily translate to success in other mediums? Thank you so much guys for joining in.

I love Hawkman and Venditti’s run has been awesome. It’s the first time Hawkman’s story has really been explained in depth. It really helps diehard Hawkman fans like me fully understand his story.

Well, not to get into any spoilers. But today’s newest release of Hawkman 21 does a really good job of getting us in the right direction.

Carter is finally fighting back against Evil Hawkman’s influence and all of Shayera’s memories just came back. So it will be exciting to see how that is resolved in the next issue.

I can’t wait to see how the next few issues play out. It’s been a great run so far and I hope it doesn’t get cut short because of sales.

I don’t know much about Hawkman aside from his Justice League appearances. I’ve always been interested in the character but haven’t really delved into his stories. Any good jumping on points you’d recommend?

Have you checked out vendittis hawkman run if not that is the absolute perfect place to start the first 12 issues are in trade which is the issues you really want to read. As a lifelong fan of comics most confusing character venditti simplifies and makes important the quirks of the character amd basically turns him into Indiana jones with a mace

Have you checked out vendittis hawkman run if not that is the absolute perfect place to start the first 12 issues are in trade which is the issues you really want to read. As a lifelong fan of comics most confusing character venditti simplifies and makes important the quirks of the character amd basically turns him into Indiana jones with a mace

Indiana jones with a mace

I think you’ll like it please let me know what you think we need eyes on hawkman.

I’m a real second banana fan!
I love Hawkman and the other guys after the Big Three.
Hawkman has one of the best profiles of any hero. Easily recognizable rorshach blot!
The current interpretation with Venditi trying to tie all Hawks together is decent.

Are you current on the venditti run by chance

I like the idea of Hawkman, but I confess that the billion incarnations of Hawkman, or whatever the first storyline was called, just wore out my patience and I dropped the title. It was always my intention to come back, but the next thing I know, the title seems to have been taken over by The Sky Tyrant, the Batman-Who-Laughserized version of Hawkman. To me, that was off-putting, so I decided to wait until that story ended, which also seems to be taking a very long time.

The next issue of Hawkman I am getting will be Hawkman #23 that comes out in April, even though I know that the Sky Tyrant story still won’t be over. The notion of a tale from a heretofore-unrevealed past incarnation of Hawkman, as a plague doctor from 17th century Europe, is extremely fascinating to me. 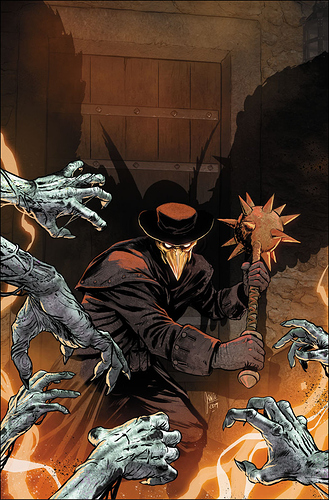 I appreciate the honesty I will say that I personally love the series as a whole especially the first 12 just because he streamlined everything and gave hawkman a different kind of importance that I think was needed. I’m excited for issue 23 just finished 22 and not going to lie Sky Tyrant is working out better than I thought and ties directly into what comes next

Not a fan of The Sky-Tyrant story line running currently in Hawkman, but I think that was forced on the very capable and talented Robert Venditti by the dopes in editorial. Their fascination with this over-used, one note Batman Who Laughs might kill this otherwise wonderful book.

Hawkman 2018
Explains all the versions
Reincarnates throughout time AND space