The Status of Action Figures

I’ve never been an action figures person. They’ve always felt cheap and limiting in many ways, but today I can’t help but feel as if that’s even more the case. Is anyone else displeased with the quality of standard action figures today?

Standard action figures, as in mass market items found in Walmart & Target? For DC I would have to agree to a degree. Mattel has produced dozens and dozens of figures in the Multiverse line over the past few years and not that many have impressed me all that much. Over the past year though, the quality of that line has improved quite a bit with more articulation and better face sculpts. Too bad for them it’s coming to an end while they were hitting their stride. McFarlane is taking over the license next year. Will be interesting to see what they have to offer. I do like the look of their Fortnite figures.

Having said that, there are other manufacturers that produce absolutely stunning figures, with lifelike detail. But they are made in much smaller quantities, with less variety, and at way way higher prices. Not typically found in retail stores. Mezco One:12 Collective for 1/12 scale figures and Sideshow & Hot Toys for 1/6 scale come to mind. This is not to mention the Japanese import brands like Mafex and SH Figuarts. Cost is prohibitive for these brands though…prices start at 80-100 dollars for a single figure. So it makes collecting more of a challenge. You also won’t find the level of variety the mass market brands have to offer.

Things I’m disappointed with in the modern era of action figures:

As for the product itself, I think today’s DC action figures are fine. Over the course of 2019, Mattel considerably stepped up their Multiverse game, delivered a fun line for Shazam!, and released arguably one of the best mass market Batman themed action figure lines in modern collecting history via Batman Missions.

DC Collectibles has released some fun product in 2019, with more to come next year, while the Asian import companies continue to chug along with quality merch (so reviews say, I haven’t yet dabbled in their wares).

Funko released a number of fun looking (I’ve not bought any myself) Batman 80th anniversary Pop figures, including Michael Keaton and Val Kilmer Batmen, as well as the forthcoming George Clooney Bats and a set of Alfred with Wayne Manor. True, Pop figures aren’t action figures in the true sense, but they are figural collectibles, so they do tend to get attention from action figure collectors.

2020 is the beginning of an entirely new era for DC toys via McFarlane and Spin-Master. Todd McFarlane fully understands action figures, so it’s a safe bet his DC product will be something to cheer for.

Overall, as an action figure collector of many years, I think the modern state of DC action figures is pretty darn good. Sure, there’s room for improvement but there always is, and that’s a good thing. It’s always better to strive for continually better product, as that benefits manufacturers, retailers and most importantly, the fans, many of whom are also involved in the manufacturing and retail side of things.

SN: 2020 is already a year to remember for DC action figures, because this is coming next summer: 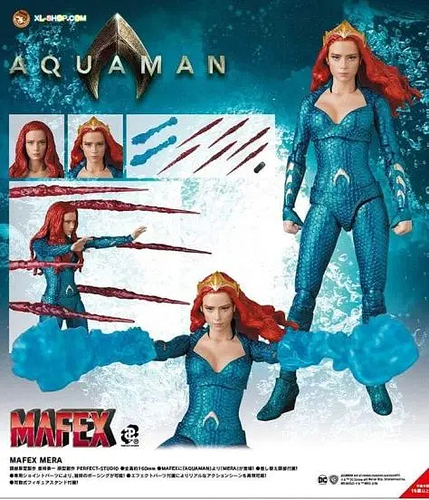 I have been collecting the Mezco and Sideshow action figures. Not that many but I only collect Batman stuff. I am Really looking forward to the Mcfarlane toys,the attention to detail is amazing and though I haven’t bought any lately I don’t think they will be to cost prohibitive ( or at least I hope not)

@Vroom, I have no experience with Hasbro’s Marvel Legends. I read a lot online about how they are superior to Multiverse, but it’s not something I can personally confirm. My lack of enthusiasm for Multiverse is purely a matter of taste

. As far as DC Collectibles, yes, they’ve made some fun stuff (love the DC Essentials Trinity). But I really do miss their comic accurate sculpts from the DC Direct and Designer Series days. Again, personal taste.

Overall, I think I agree with you that it was a good year overall for collectibles. What’s cool is, as much as we both like to collect, our interests are different. I’ve gravitated more towards the more “premium” (air quotes) offerings from the likes of Mezco and Sideshow. Also started dabbling in statues this year; also very expensive. Hence buying much less in terms of number of pieces. On the other hand I see the discussions you & others have over hunting down Batman Missions or Multiverse pieces, and feel that I’m probably missing out on having a nice variety of figures I can have on display. All proof that there is plenty available for every kind of collector, making it good times for us

@fattyboonbatty, I absolutely love Mezco and Sideshow figures. Haven’t been disappointed by one yet, but I only have a handful. Price makes it prohibitive to buy every piece. One of the reasons I decided to limit myself to DC Trinity items (other than my adoration of the characters of course).

@moro That’s truly one of the greatest virtues about collecting: There really is something for everyone, be it characters, product category, company preferences, etc.

I like firestorm, so I’ve picked up a couple figures. I got the DC Icons Firestorm and that’s really good quality. The Funko pop firestorm isn’t bad, but it does fall over a lot lol. Action figures are kinda expensive nowadays, and the Multiverse figures don’t have swappable parts (at least not the ones i have).

The figures that they made were just so obscure, the average buyer had no interest. Then when new waves came out, Wal-Mart either wasn’t interested, or they ordered them in such low quantity that the scalpers bought out the inventory before the average people could.

When it comes to collecting action figures (or really anything for that matter), there’s nothing like going to the toy section and seeing toys on the shelf and picking out what you want to buy and taking it home. I live in a very rural area, so to work on my Multiverse figures, I’ve basically had to order or pre-order them to make sure I get to add them to my collection. Wile I enjoy having the figure in my collection, opening a box from UPS just isn’t the same.

I am so looking forward to the McFarlane figures. I wish they would release some information though. Maybe some pics of prototypes, or time frames to the first wave.

I’ll say this and only this, you get what you pay for. It’s that simple. Peace!

You said it best bud

The figures that they made were just so obscure, the average buyer had no interest. Then when new waves came out, Wal-Mart either wasn’t interested, or they ordered them in such low quantity that the scalpers bought out the inventory before the average people could.

The New 52 Doomsday wave is one of my favorites from the Multiverse line. I found it to be a nice mix of comic, movie and TV characters, plus the Doomsday C&C was pretty neat.

I blame Walmart for their oversaturarion of well, anything, since they’re the ones responsible for quantities of what they have, but especially of that wave. Target didn’t seem to have a problem moving it, and appeared to order it within normal human expectations.