The Scariest Story in Every DC Horror Anthology 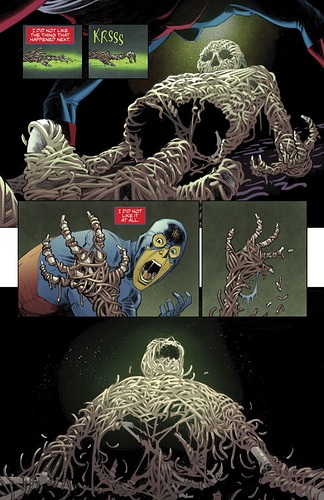 It’s Halloween. How about a scary story? From House of Mystery to Tales of the Unexpected, DC and horror have gone together like vampires and blood, witches and broomsticks, or zombies and brains. For generations, DC’s horror titles have done much to inform the flavor and texture of the publishing line, to the point where even DC’s superheroes can’t help but feel that eerie chill when the season of fright draws near. In 2008, DC introduced the DC Universe Halloween Special, a yearly anthology of terror set within the DC Universe that continued until 2010. Then in 2017, DC reintroduced the concept with a series of annual anthologies that were each built around a different theme. In both cases, the idea was the same—each book was a place where many of DC’s top creators could circle ’round to juxtapose iconic heroes and villains with the Halloween spirit.

Today, all of these anthologies are available digitally, with all but the most recent also being available to read on DC UNIVERSE INFINITE. And read them you should. But if the thought of binging hundreds of pages of pure terror has you worried about sleepless nights, allow us to be your helpers in comic book horror. Below we’ve provided a guide to these anthologies, picking out one particularly frightening tale within each book to curdle your blood.

Come see the horrors we’ve got in store for you over at DC comics!

Which of these scary stories scares YOU the most? Let us know in the comments!