The Sandman is officially out on Netlfix! 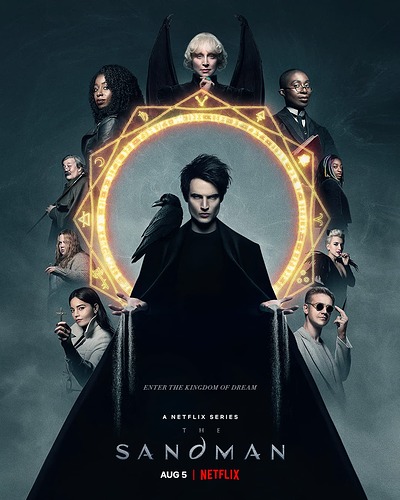 The Dreaming is open for business, and critics and fans alike are loving what they’ve seen so far! With gorgeous, sweeping vistas to dark and twisted scenes, The Sandman on Netflix is a sight to behold–and with 30 years of history and planning, it’s no surprise creator Neil Gaiman has pulled together an incredible story.

Follow the journey of Morpheus, one of the Endless, as he comes to terms with life, loss, love, and the true essence of humanity. From Netflix:

…When Dream is unexpectedly captured and held prisoner for a century, his absence sets off a series of events that will change both the dreaming and waking worlds forever. To restore order, Dream must journey across different worlds and timelines to mend the mistakes he’s made during his vast existence, revisiting old friends and foes, and meeting new entities — both cosmic and human — along the way. Have you started watching The Sandman on Netflix? If so, let me know what you think in the thread below!

This dark, engrossing comic book adaptation is utterly lavish, and features an emotional depth that’s almost unheard of in fantasy epics. It should delight fans and newcomers alike

Love to see it! I can confirm…the show is incredible.

Just watched the first episode. Can already say its one of the best shows of 2022 hands down!!

If Netflix and WB are smart they’ll Greenlight a season 2 asap!!

Just watched the first episode. Can already say its one of the best shows of 2022 hands down!!

Heck yeah! I’m in the same boat–definitely one of the best shows of the year. I’m so glad you’re enjoying it!

I’ve only seen the first two episodes and it is incredible so far. I will agree with everyone saying it is one of the best shows of the year. It is easy top 3 for me so far. And I have so much left to watch.

If Netflix and WB are smart they’ll Greenlight a season 2 asap!!

Its been promoted and its only been on a day we don’t know the viewership yet.

Watched 4 episodes so far and it’s been great! I don’t like the interpretation of Hell here though, it’s too human-like, protocols, rules, and treated like an actual royal kingdom, just no. Not to mention the fight between Dream and Lucifer was so boring, it felt like D&D from scenes I’ve watched on shows.

Being a big cinematography, production design and visual effects nerd, I found that episode to be awash in beautiful landscapes, engrossing photography and stunning visuals on a level very few other “epic” shows are.

I’m definitely diving into the other episodes in a slow, deep way, akin to when you eat or drink something that is wonderfully delicious and you want to lengthen the experience, so as to immerse yourself in it for as long as possible.

Sandman is #1 in the U.S. today! Hopefully it can keep a spot in the top 10 for awhile and get renewed for a second season! 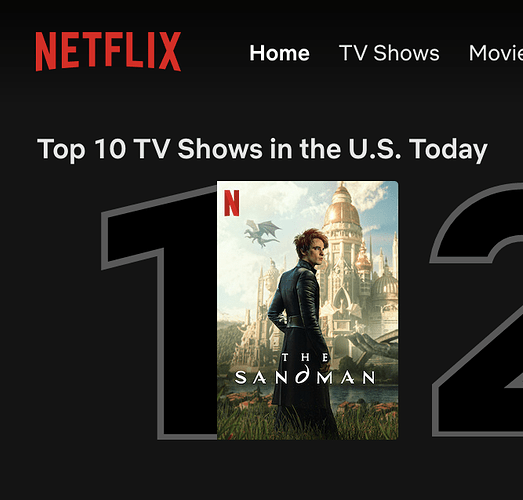 Knowing Netflix, the odds are it gets cancalled in a month

I have to admit, I read your choice of wording (being #1, in the U.S.today) reference Sandman’s debut on Netflix, with wry amusement. And in stark contrast to the review I read in USA Today, about the series. The writer of which, seems to go out of her way to say how understanding she is of Gaiman’s work both on the comics and live action series. The one (she feels) simply doesn’t translate well in the Netflix adaptation. Being both boring and lacking a coherent narrative. Despite having so much potential to be better. Or words to that effect.

Oh well, you can’t please everyone Neil. But, from what I’m seeing for myself, and am reading from others, you’ve done your creations proud. And in the process, made an awful lot of us, very happy. Long live the Sandman!

Someone’s being a negative Nancy. Yes Netflix kinda sucks. But I don’t think they’re dumb enough to can it after just one season.

But yeah have to wait and see I suppose.

That’s interesting! I’ve seen so much praise for the show, it’s fascinating to hear a review at such odds with what other critics are saying. But alas, everyone has an opinion!

I’m in agreement with you though–long live the Dreaming!

For those who need a little extra Sandman in their lives, check out the Sandman Dreamcast! An immersive audio experience for you to relax and unwind to, alongside our beloved characters from the world of The Sandman…get cozy and give it a listen!

Well, I sat down to watch a couple more episodes today and I watched 5 more…

I will still say this is one of the best shows I have seen all year. The acting, the pacing, the connectivity between plots, the sets, the music, everything is just gorgeous. I don’t have a bad thing to say about it. I’m just loving it.