The Psychology Of Supervillains Club..May 2020 - The Riddler

I kind of got the impression that giving away the clue is part of the Riddler’s pathology (to borrow from all the other procedurals i watch). this came to me while watching Gotham. of which, i did not like the split personality. I liked the scheming. I can accept some killing, but it seemed too much of that character, and killing is not Riddler’s main M.O.

I find that the three Riddler episodes in BTAS/New Adventures of Batman and Robin. We see a progression of Riddler going after a personal grudge, to going after Batman, to ultimately losing the battle of wits to Batman. Just those 3 episodes are an interesting arc in themselves.

Also not a fan of the split personality angle on Gotham (but I forgave it, because I liked the actor

And do you mean the killing in Gotham, or Dark Knight? In Gotham, which I haven’t seen all of, I didn’t care for the girlfriend’s murder being his tipping point into villainy. But that series loved its drama, haha. As for Dark Knight, I can’t remember why he was so eager to recreate the ritual instituted by that cult, but I don’t put it beyond Riddler to use human lives as props for his agenda and games.

I meant the killing in Gotham. Because I agree with your spoiler text.

For those without Roku, AppleTV has an app called “filmrise”. This has the Batman ‘66 series as well. Also with very few commercials. I watched 4 episodes of Batman’66 and only got 3, 30 second commercials.

I’m hunting Riddler episodes, so if I find a few that are interesting. I’ll post them as “optional extras”.

@DeSade-acolyte, Oh man seriously this is a great club theme and I truly can’t think of a better member to host these discussions. I will return evil sir!

Finished Batman (1940) 171. There is an editor’s note mentioning issue 140 or 141, but the issue in question is not on the service. Also read 179, which was either service recommended, or just the next issue available. Also, with 179, i had to switch platforms because a page was replaced by the Alfred Oops. But it also definitely explores Riddler’s compulsion to leave clues.

171 is the first Silver Age appearance. Unfortunately his Golden Age appearances aren’t on the service. I have made a print to digital request, but that will be a while I’m sure. 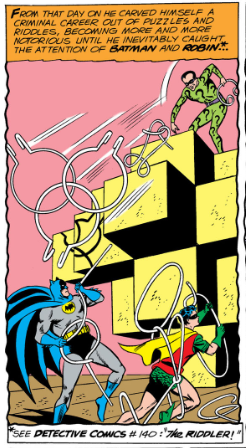 which is actually Detective Comics 140. zoinks, read all the words AntLeon!

Ok that makes sense. If I recall correctly that was his 1st appearance (and possibly only one) in the Golden Age. That’s the issue is requested the print to digital team for.

Very first ep is a good riddler one

I’ve never found him self defeating and rather view his leaving clues for Bats as his way of demonstrating his intellectual superiority. If Bats had all the clues and fails to stop him he can truly say he outsmarted the Bat

That’s why i gotta push Batman ('40) #179. It demonstrates the pathology. also, he just likes to commit robberies.

I just add 2 Batman’66 resources. Not on DCU, but you can try the “filmrise” app or Roku.

Both of these are great episodes. I recently watched them when I discovered Batman on Roku.

It’s interesting that for all the camp humor of Batman’66, Frank Gorshin’s Riddler might be the most malevolent Riddler of the 20th century, and still one of the most malevolent versions of the character to date. There are few interpretations of the Riddler where the concept of Batman’s death brings out such sheer, manic glee bordering on the nearly orgasmic.

It is that sense of intensity that makes Gorshin’s portrayal still the best, IMO of all versions of the character either live action or animated. John Austin was fun, and Jim Carrey had a comedic element but neither came close to the true sense of villainy that Gorshin brought to the role.

I think it really shows the Riddlers’s ability to be just as strong a Batman villain as the Joker, if given the opportunity.

I really have to make an effort to read the war of jokes and riddles. and check out these batman '66 episodes. i am sure i have seen them, but with my focus on the villain might give me new perspective.

The Hush Watchalong thread will be made later today

I wanted to post a link here as well: Hush watch-along thread

Started The War. Riddler is drawn very much like a thug. and surprisingly adept at fisticuffs.

Just finished the War of Jokes and Riddles”.
It is a different take on the Riddler. It’s certainly more externalized than internal. It is still a battle of whits, but somehow less fulfilling.

It doesn’t show the Riddler’s quippy intellect, which I favor.

It is a more malevolent take on him, though still not as malevolent as Gorshin’s Batman’66 take. There is no joy. No relish. It’s kind of a downer. Sure Nigma is a compulsive and arguably “wins” just as the Joker does.

I have to get back to it. Cutting a question mark into his skin plus his monologue about seeing things and making connections others cannot was kind of weird for me. not a good weird, but not “where’s that trigger warning” weird. I am hoping to make time for that, Batman '66 and maybe some more silver age.