The Pros and Cons Of Wearing A Cape

Cons:
None (While you may make the argument that a cape could be used against you, to my knowledge this has just led to more interesting fights and no loss of hero lives to this date)

I have another question.
What is the perfect cape length?

Incredibles movie covered why “NO CAPES!” 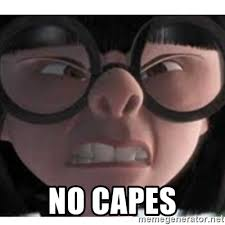 (They do look cool though on the right outfit…)

What is the perfect cape length?

For fashion and fighting I think butt to knee length.

For evening cocoa, ankle length is the way to go.

Full for ascetics, half for practicality, shoulder for Mando Mercs (It’s a Star Wars nerd thing).

I think butt to knee length

What about a detachable cape?
Or maybe expandable?

What about a detachable cape?

Detachable yes, but not visibly so. No clips. Cape looks best when it naturally slips into the suit. But whenever you need to wrap someone for protection or warmth it should be possible.

or if it gets sucked into a Turbine/Tornado etc

You got be a really strong hero to be able to wear a cape so it isn’t a liability. The kind that won’t get torn apart by the jet engine but rather tears apart the jet engine.

Pitch for The Incredibles III

It’s 20 years into the future. Jack-Jack, having never lost his full arsenal of super powers is now the most powerful super villain on the planet. The Incredibles have long since been gone, taken out by their youngest member. Along with anyone else who tried to stand against him.

Back in the present, it’s only a couple of days after the second movie and superheroes are making an everyday comeback. So much so, they integrate with normal people. The Incredibles, now embracing their costumed selfs always go out in their suits. They’re famous but still the humble family we know and love. Sir Seer, a magical superhero has the power to see the future and he sees a prophecy of destruction on its way and all points to their baby son. They decide to put Jack Jack through a procedure that will leave him powerless.

The evil Jack Jack gets his hands on a time machine and hearing that his future is in danger, heads right to the superhero utopia present. Death and the destroyer of worlds has arrived. By the end of the day, he will be the only Incredible, again.

Heroes of ridiculous power and the question of limitations are spoofed in this self aware superhero epic.

In the end, they beat him by using his cape against him. Evil Jack Jack has a cape. Bob decides it’s best for the whole family to surrender their powers and that being normal is the most super option. The Incredibles are no more, but their suits weren’t torn, they were hung up.

I think i will have to go to that Cloak and Dagger show: a cape is just an add-on for a shirt.

I’m wearing a cape right now. Getting ready to do the dishes!

Wait wait wait, they beat Syndrome with his Cape in the Jet Engine. come on now, Pixar would’t reuse events!

Syndrome’s cape wasn’t made from the icey tail of a passing comet.

Smashes Face on Key Board

THE MAN’S A GENIUS!

Only con to wearing a cape is you’re not indestructable. But for some heroes, that’s non applicable.