The Pride of Batwoman 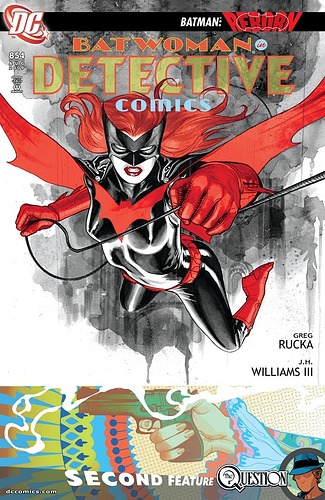 Why do we celebrate Pride? It’s a fair question.

We celebrate it because in a world where members of the LGBTQIA+ community have to fight to justify their existence, Pride Month offers a chance to celebrate their identities and help other members of the community find affirmation. Millions of queer people worldwide grow up in communities or households that lead them to hide who they are and feel shame, and until that has thoroughly and unequivocally changed, there will always be a need for Pride Month. There is no shame in your identity, and you should feel free to celebrate who you are.

Among DC characters, Kate Kane has always embodied the spirit of Pride. The heroine known as Batwoman is one of Gotham’s most valiant protectors, but it almost didn’t end up that way. Kate Kane’s life almost took a different path, one that would’ve placed her in the United States Army instead of the Batcave. Faced with a crossroads, Kate was forced to choose between giving up her lifelong dream or denying her own identity.

To learn about Kate Kane and her place in the LGBTQIA+ community, head over to DC Comics!

I’m pretty disappointed in this article, specifically because DC is generally good at this kind of thing, it’s a little weird for them to fall back so heavily on bi erasure. “homosexuals serving in the military”… “gay service members”… “a gay enlistee”… If I left a comment every time a corporation or celebrity shrunk the entire LGBTQIA+ community down to its first two letters, most of Seth Meyers’s Corrections would be responding to me, but since, again, DC has generally been pretty good with terminology like this, having been ahead of the curve in adding the “IA+”. It’s also a little rich not to acknowledge that the whole reason Kate was made a lesbian post-Infinite Crisis was specifically as a turning-of-the-tables on their own explicitly homophobic stance from decades earlier. “always embodied the spirit of Pride”??? That’s just denying history. But frankly, I’m more worried about the first thing - I mean, I don’t expect future Disney articles to mention the “no gays at Marvel” policy or the explicitly homophobic cancellation of the hands down best Disney show. Just as long as we can keep moving forward, which is a little hard to do if you get rid of the “BTIA+”.

Interesting, as a veteran of the Marine Corps. I think DC perspective is connecting the Pride that Veterans have after serving, or even during their service when they visit their hometown, to the hope the “Rainbow” community will have in being respected who they are as human beings. The straight, or cis-side of bi- has very rarely been an issue. In fact, the conversion therapists have used the cis-side to promote their subtle agendas. But I understand that Jon Kent et Al should be given more visibility also. I’m hoping for mor trans visibility myself in DC.

The straight, or cis-side of bi- has very rarely been an issue.

This Wikipedia article with a sizable table of contents would beg to differ. Long story short, turns out bisexual erasure can, in fact, lead to adverse mental health outcomes, bisexuals in various relationship-related cases can experience worse outcomes if the legal system assumes that the person is only pretending to be bi because, in their minds, there’s no such thing, and generally experience worse mental health than gay and lesbian individuals - All this for a category that, although it shouldn’t really matter, is, for what it’s worth, larger than the gay, lesbian, and transgender populations put together. The article - and this is Wikipedia - is worth a read. Your blood will boil.