The Perfect Impermanence of Batman 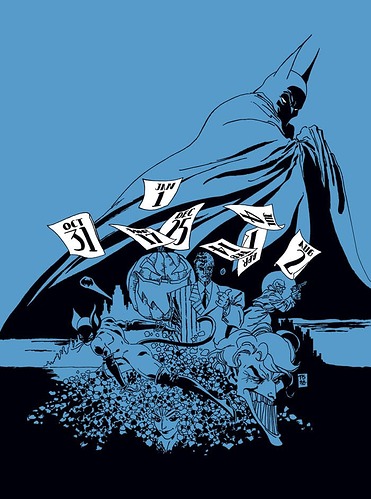 Superhero comics are a funny thing. They’ve been around forever—in Batman’s case, over eighty years . The book the Dark Knight debuted in, Detective Comics, has long since passed the thousand-issue mark. Now, a thousand installments of anything is a pretty astronomical number, but a thousand issues of a comic… That’s a truly intimidating amount of story. And it’s all, essentially, starring one character. One guy, a thousand or more stories. Eighty years.

It’s not really a secret that comic series are able to reach such absurd numbers by getting a little creative with things like time. Batman as a character may be in his eighth decade, but in the fiction, Bruce Wayne has barely aged a day. And he never will, really, unless he has to for one adventure or another (here’s looking at you, Dark Knight Returns and Batman Beyond ). Birthdays may pass, he may enter and exit relationships and new Robins may join the quickly growing pantheon. He may even die at some point—naturally or unnaturally—but even that will eventually be undone, one way or another. Sooner or later, Batman will be back to the same spry crimefighter we know and love. Batman will always be Batman. That much you can count on.

To read more about how Batman’s impermanence is actually perfect, head to DC Comics!

Do you agree that impermanence is a good thing? Let us know in the comments!

Do you agree that impermanence is a good thing? Let us know in the comments!

Well, Viagra probably thinks it’s a good thing, because its what they make their money on and-

leans in and squints as he looks at the screen, then leans back

Oh, impermanence! Well, that just makes more sense in the given context, now doesn’t it?

Yeah, I like Batman’s impermanence. It would get boring if he just stayed one way forever and ever and nothing was ever changed, revitalized, re-evaluated and the like.

Besides, if Batman stayed the way he was in 1939, he probably would have long, long since fallen out of popularity and as a result, the vast majority of us who got into DC because of Batman likely wouldn’t be here.

Batman, we salute you!

The only real problem is that modern comics really want to give characters proper arcs, and this “never aging” approach is more effective for a static character.