@Jitsu for your next OH, what’s your favorite dc team?

Say, if you’d like to chat Spawn, here’s a swell place to do so.

I’ve been reading the new Spawn stuff here and there, and it’s pretty rad.

McFarlane has also debuted a new Spawn toy line, and those figures are highly tempting, but so far, I’ve resisted. So far.

Hope that you have had a good Thanksgiving and nice weekend.

A few orders of business items then.

First, was there an update to some of the thread posts in our fine community?

I’ve seen some posts that have sort of looked like the following below on my computer using chrome.

Next, speaking of the above community highlights…

It seems that in my preferences the only one that has been consistent is watching the first post for “New Comics Released” under “Categories” in Preferences, while anything like “Community Highlights” under the “Tags” in Preferences either shows up a week later, or for other things in that same section sometimes do not at all.

Well, that’s it for business, so… Now for something a little more fun.

For Applejack it would be videos that showed up in my feed about animals, and for Alec it would be what I would find that included a banjo.

For now… How about a funny panel featuring… Batman? 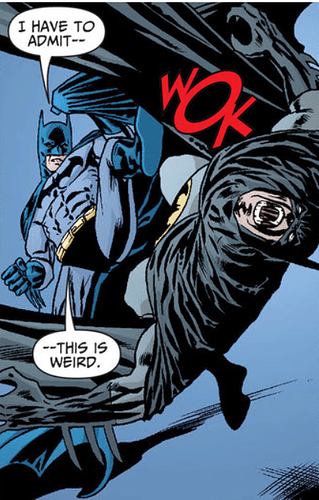 What is your favorite game to play???

Have you seen Holy Musical B@man?

Hello! What is your opinion on cats? Dogs? Reptiles? This is all for research purposes

Also: is DCUI planning anything for Christmas/the holiday season? In years past we’ve had the Yule Log, but it went away with our video content.

Have you seen Holy Musical B@man ?

never heard of it

Did you have a good Thanksgiving?

I was hoping that you could please provide a status update on two issues that have been known about for months, but which we don’t seem to be making any progress towards resolving:

Both of these problems were reported the same day that the issues were added (9/21 for Nightwing and Superman, 10/12 for Suicide Squad) and multiple times since but, months later, they have yet to be resolved. Do you know or can you please find out if both or either of these problems will be fixed before the end of the year? Also, it would be nice to know why it’s taking so long for these problems to be fixed (just to satiate my own impatient curiosity, if nothing else). Thank you.

(P.S. You’ll quickly get to know me as the one who typically uses Office Hours to ask serious questions directly related to DCUI like this.

Hello @Jitsu just a simple question this week,any chance DCUI, is bringing the Xmas Yule Log back on this site, HBOMAX, The Dc Comics site or somewhere else this holiday season.

@Jitsu I got a late start cuz gunshots woke me up. But, I’m halfway thru the new drops, & this might be the best Tuesday comics drop ever?!?! Do u read the drops? Or do u read em b4 they are added? Or not at all cuz we keep asking u questions lol…

@Jitsu this is tonight right?

First, was there an update to some of the thread posts in our fine community?

I’ve seen some posts that have sort of looked like the following below on my computer using chrome.

Hmm as far as I know, there wasn’t an update. But I’ll do some digging and figure out why that’s happening!

Well this is less than ideal! I’ll look into this too and see what the deal is. Can’t have that notification lag hangin’ around!

For Applejack it would be videos that showed up in my feed about animals, and for Alec it would be what I would find that included a banjo.

BIG fan of tasty food videos…foods of all kinds!

I hope you had a great Thanksgiving as well, friend!

Did you have a good Thanksgiving?

I did! I had a very lovely gathering of a few friends. We ate a wonderful meal, chatted about video games, and relaxed by the fireplace.

this is tonight right?