Heeeeeelllooooo @ObscurityofDCClub and other members of the DC Community, and welcome to Week 9 of the Obscure Book Club! This week we’ll be focusing on… 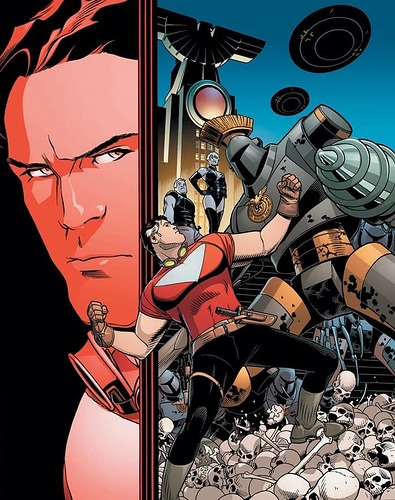 WARNING: In this series, there will be several things that could be found offensive to some people. In the series, characters are met with homophobia, anti-semitism, and praise of the Holocaust. If you are not comfortable reading this series, please don’t.

Description taken from dccomics.com: As Tom Strong and his family prepare to celebrate a wedding, the unthinkable happens: Before their eyes, reality alters to become a world conquered by Nazis and ruled by Tom’s nefarious son, Albrecht.What mysterious secret from Tom’s past has brought about this catastrophe? To overthrow Albrecht and restore the world he knew, Tom must find a way to journey back in time and seek help from the only man he can trust: himself. But will even two Tom Strongs be enough to stop the Robots of Doom?

With that out of the way, let’s get straight into the questions:

I’ll be honest here, I haven’t even finished this yet lol. I read the first half of the series and then got sidetracked with school.

Answers to my own questions:

I think it was to show Tom’s culture. It’s always cool to learn more about what’s important to people, and I think Tom’s heritage is important to him. It also shows that, at the time (and still now), not all Germans were Nazis.

The more I’ve read, the less I think she truly loves him. I think she just wants a child more powerful than Tom, who can defeat him.

I prefer Tom Strange. He has a more relatable personality to me IMO.

I think it’s fine for them to put them in the story, but not so frequently. I get mentioning it every once in a while, but to put slurs in almost every issue seems pretty excessive to me.

Again, another story that I was able to breeze through in a sitting. I feel like I’m missing out on some of the deeper stuff in this because while I do remember reading some Tom Strong before, it was a long time ago. But it didn’t dissuade me from keeping up – honestly, it just madee me want to go back to the Alan Moore run.

It wasn’t just German, though – the Salamanders had their own language as well that we see just enough to understand the story, but some of it is hidden to remind us of all these different cultures and ideas around us. Ironically, the German villains who are trying to eradicate said cultures incidentally do their part to show this.

Speaking of the Salamanders, I did love the detail that Tom Strong could understand their language, but wasn’t fluent in it. A character like Tom can appear like a Mary Sue that can do no wrong, so it’s nice to see him have some imperfections and makes him feel a bit more real.

With only knowing what I know from this book, I think as someone said, there’s a feeling that Strong represents the ubermensch, the superior man, and Ingrid is drawn to it. I also wonder if there’s a bit of a taboo nature to it, and she thinks if she can convert him to her side, that will prove her superiority.

I don’t know if care is the right word, but from what I understand, Albrecht was raised without his “father” and I thin that had an effect on him. Similar to his mother, he would love to turn his father to their twisted way of thinking, and that way he can finally have the father he always wanted.

…I’m gonna be honest, I read the first issue of Terra Obscura and I just wasn’t feeling it at the time. I may give it another chance at some point.

I think such things should be talked about and can be utilized in fiction, but you have to come correct and treat it with care. The book definitely uses the symbols, historical figures, and some of the wordplay, and we are told what happened, but we don’t see the process in which this horrifying future came to be. I suppose they could have shown some of that in the story and made it work, but it might have made it harder to keep the lighter, pulpy tone the story was going for – which for some people, the idea of using Nazis in a light, pulpy way might be offensive.

I think another thing that helps are the heroes involved. This Nazi plot is ultimately stopped by a mixed race family and a Jewish supervillain with whom our hero works with because they face a common enemy. The fact that the so-called “undesirable” of the Nazi regime are the ones that stop them I think does a great job of really denouncing their sick beliefs. It’s sort of reminds me of the Wolfenstein games – it’s one thing to just run around killing Nazi cyborgs in old victorian castles, but knowing it’s a Jewish man B.J. Blazkowicz duel wielding machine guns to take them down just feels like an extra little twist of the knife.

That reminds me, I really should finish those games…

Wow. This was… kind of rubbish. I know Tom is supposed to be a homage/parody of Doc Savage, but for this miniseries at least he just comes across as a half baked riff. I’m still morbidly curious about the original Alan Moore series, and if that’s not too painful I might pay for the Many Worlds of Tesla Strong one shot that’s missing from DCUI. But mostly this just made me miss Chris Roberson and Bilquis Evely’s Doc Savage series and wish that Dynamite would revisit it (or the Michael Uslan Justice Inc that followed).

Part of the problem was that the miniseries assumed a background with the characters. Not even a one line narrator box of who these characters are - just tough luck if you’re not familiar with them. But the dialogue was so awkward; it seemed like it was envisioned as a longer series and got chopped down to six (in preparation to sell ABC to DC?) without much care. I honestly thought the scans were missing pages in some places. The inconsistencies of bylines when jumping through time didn’t help.

Having spent some time in “modern day Nazi world” before being imprisoned might make the ending have some resonance. As written, it echoed as hollow as Man of Steel’s death of Zod.

And what the hell is up with stripping Pluto nekkid before rescuing him through time? That’s pretty messed up, Tomas.

Lazy writer trope. Less offensive and confusing to the reader than trying to spell out an accent, but more accessible than making us translate everything ourselves. Masterfully ridiculed by Chip Zdarsky (in Unbeatable Squirrel Girl I think?)…

No. I didn’t see him showing any sign caring, trying to gain trust, nor allegiance enough to explain this. If this is referencing to him letting Tom out of prison to trade ideology while sparring, I saw that purely as toying with the prisoner to prove himself superior and in complete control. It’s intended as torture and nothing more.

I missed that round, so will need to catch up to comment.

I’m going to go with any version of Tom has got to be better than this one dimensional logic flaw.

I mean, they’re not promoting these things. They’re showing Tom and his family as being steadfastly and unwaveringly against it all. Nazis are the clear cut villain that have been used as such since the dawn of comics. Tom never considers Albrecht’s point of view as the least bit valid, or even sane. There’s no question of who the hero is. There’s no “seeing the villain’s point of view” as you get in some modern age stories. It’s straight up binary moralism, directly echoing the pulp era it is spoofing. I obviously don’t know how Tom and Dhalua met and fell in love, how he was characterized prior to that, or how he was ensnared by Ingrid, but I imagine that might put some more meaningful insight in to the story, but the context is missing here. (i.e. “Well, I was born in 1880 Austria or whatever, so I was raised to be an Aryan d-bag, but meeting Dhalua showed me how wrong I was. Seeing those thoughts in my own son brings back painful memories. Maybe I can help him see what I now see.” … nope. No struggle. No introspection. No character.) If this story has any depth, it definitely doesn’t deliver it standing on it’s own.

Bilquis Evely, you say? Loved her work on Wonder Woman and Supergirl: Woman of Tomorrow! I may have to keep an eye out for that one…

Bilquis Evely, you say? Loved her work on Wonder Woman and Supergirl: Woman of Tomorrow! I may have to keep an eye out for that one…

Yessss! I think Doc Savage was my first book of her’s. (Alex Ross covers are also beautiful!) She did David F Walker’s Shaft miniseries, also from Dynamite!, the following year. It wasn’t until I was reading Legends of Tomorrow that it dawned on me that all three were the same artist and I started stalking her work.