Hello @ObscurityofDCClub and other members of the DC Community! Welcome to Week 13 of Obscurity of DC’s Obscure Book Club! This week, we’ll be focusing on… 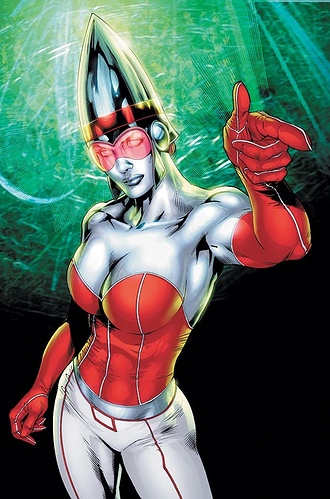 Description from dccomics.com: Obsessed with the idea of becoming a famous super-hero and preserving his beautiful wife’s youth, Professor Lance Harrower invents Smartskin — a steel-hard living fiber which bonds with skin collagen. When his experiments go awry, Harrower is suffocated under a coating of steel skin. His wife Alix survives the horrific accident only to find herself an outcast and a freak. Now jobless, alone, and encased in super-hard, living metal, she is a truly reluctant super-human. What happens when you get powers and abilities beyond those of mortal men but don’t want them? Find out in “Ballistic: How the Bulleteer Began”! [aka Seven Soldiers: Bulleteer]

With that over with, here are the discussion questions:

Answering my own questions again:

Because she had her wedding band on and doctors were able to inject her with medication to keep her alive, while Lance was not wearing his ring and suffocated while they bent needles on his dumb skin.

I don’t think she was inspired - she’s completely against it through the whole story. It’s why she doesn’t join up when Helligan calls, nor when Vigilante tells her she’s destined to save the world from the Sheeda, etc. She only puts the costume on to get work since her prior career was ruined by looking like a robot.

Because of Lance’s obsession - he had no altruistic intent. He just had the petty desire for fame and forever youth. Alix is actually a good person, but she came at heroism sideways, and every step she took further “through the looking glass” only made her detest it more, with the celebrity worship, the sexualization, the depression it creates in those who aren’t A-tier, the arbitrary arch-nemesis beef, the entrapments of “prophesy,” and so forth.

Again, because of Lance’s obsession with eternal beauty/youth. She sees the value of life in it’s finite nature. (She never meets him, but wants to avoid the blasé boredom Frankenstein has developed.) She has no interest in being special. She just wants to help real people in a human way, as she has her whole adult life up to this point.

No, but the outcome would be the same. She never became a superhero. She put on the costume Lance made to try and get work, as a bodyguard, not as a superhero. Helligan dragged her to the Hand in that context because she wants Alix to be part of the fight against the Sheeda. Alix never Sally found Alix, not the other way around. Prophecy delivered the final blow for her; she never joined the fight as a hero. It’s left ambiguous in the final battle, but I don’t think she ever even knew that the “victim” was Gloriana Tenebrae. Just another person involved in the accident which she survived.
Though Morrison planned all these minis to work as ongoings, I don’t think Bulleteer would continue as a superhero story - it would tell the tale of her guilt over the events of the finale, and her continued struggles to choose her own life in a world where she looks like a superhero but has no desire to be one. She just wants to be her original self, which is a more heroic person than anyone she encounters at the hero convention, but feels like she can’t — and that’s the irony of her tale.

I think she just wanted to get revenge.

I don’t see any revenge motivation. She has one moment of revenge when she realizes Sally was sleeping with Lance. But she immediately regrets it and wants to help Sally (up until she’s sick of the backstory and realizes Sally is just insane).

If it wasn’t for the kid, I don’t think she’d be alive to become a superhero.

(I’m not convinced she would have succeeded in killing herself. Maybe if she picked a fight with some JL level threat, but after the initial leap, I think she was more “searching to feel” than actively trying to kill herself. The kid was just a distraction from that to bring her back to herself. It could have just as well been a kitten in a drainpipe or the classic street thief grabbing an old lady’s handbag.)

That might’ve sounded jerky. I swear i didn’t mean to sound rude. Sorry if it came off that way.

Relax. You didn’t sound like the best snack of all time.

Is that a compliment or an insult?

A compliment that emphasizes you didn’t sound jerky and an acknowledgment of beef jerky, aka nature’s greatest snacking resource.

That might’ve sounded jerky. I swear i didn’t mean to sound rude. Sorry if it came off that way.

Not at all jerky. (Though delicious.) I didn’t mean to throw shade with my original comment either - just discussing my interpretation of the read.

Oh, understood. I meant that mostly as a gag, but his “sales pitch” does seem to have worked out fairly accurately. Sally’s able to break a bone, or at least hurt her, but she gets right up from a refrigerator and is the only survivor of the car crash.

The way she repeats his words (to the creepiest psychiatrist in New York) as we see the flashback reads to me like she’s giving Lance’s words different meaning as the falls apart. They’re the things he craved in a mate; not a naturally aging human relationship, but an idealized impervious body that never ages (for over 70 years). They’re the “gifts” he left her in getting his wish in death. And they’re her “curse” as she roams aimlessly through the streets. She may not have known they were accurate at the time, but in describing the night to the doctor, I feel like she “knows” them to be true at that point.

My certainty that she’d survive the night isn’t in her super skin, but in her mental state. She “thinks” she tried to kill herself. She “thinks” she was going to run until she hit something that would kill her. I read that as not having a clear plan to die, but running aimlessly in grief without direction - only in hindsight does she realize it was with self destructive intent. I think we see enough from her subsequent fights that she is impervious enough to not fall victim to such a spontaneous suicidal urge the way a “normal” human would. The doctor gives this distraction meaning for her, and gives her “permission” to give her life meaning. But I think the kid is just the thing she ran in to. She could just as easily have stepped in to traffic and realized she hurt others more than herself, or jumped off a taller building and seen the damage she caused. But having the mom assume she was a superhero is what resonates better as a story mechanism.